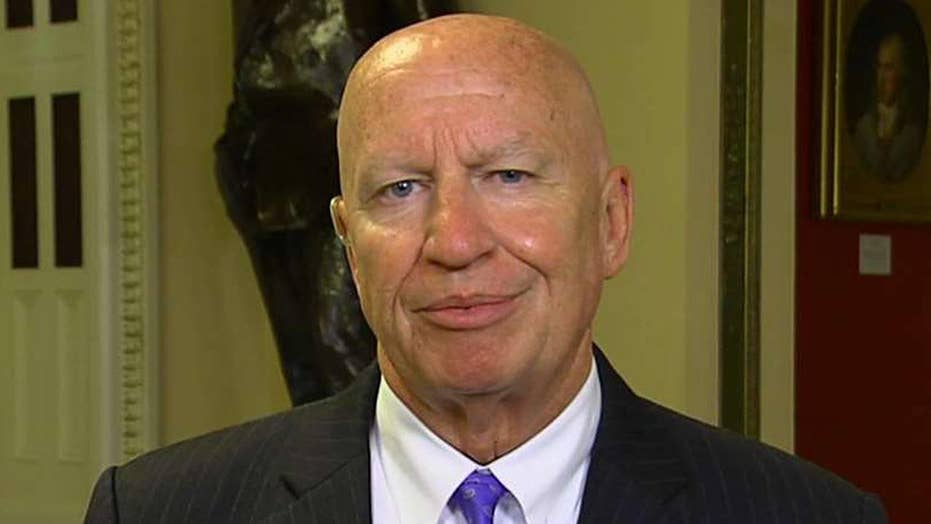 This is a rush transcript from "Your World," September 27, 2017. This copy may not be in its final form and may be updated.

NEIL CAVUTO, "YOUR WORLD" HOST: And not since Ronald Reagan has an American president attempted to do something this big, this sweeping and, for a lot of folks in Washington, this controversial.

For example, Chuck Schumer, the leading Democrat on Capitol Hill, saying that this is a nonstarter, that the president's overtures to the rich on things like getting rid of the estate tax are a nonstarter with him.

The point man in all of this joins us right now in his first interview since all of this became official, shall we say, the Texas Republican, the man who runs the House Ways and Means Committee, the guy who I said was doing tax cuts when tax cuts weren't cool.

Mr. Chairman, very good to have you. Thank you.

CAVUTO: All right, let's talk a little bit about what is in this, because the president was scant on the details. He talks about rich folks like him, sir, having -- to get nothing out of this.

But the argument is that, with a lot of investment-related taxes going down, the estate tax going away, and at least part of the top rate coming down, that the rich are doing well. Is that your sense?

BRADY: No, it really isn't.

I think those who benefit the most are middle-class families struggling to keep every dollar they earn. A lot of Americans really in the lower-income area who pay 12 percent rates today or 10 percent rates today will pay a zero tax rate going forward.

And because we're going all in on getting our businesses, local businesses competitive, they're going to see higher paychecks and greater jobs. And so that really translates for the middle class of America in a big way.

CAVUTO: All right. Now, there had been talk, sir, about a fourth rate. Maybe that was a bargaining chip to use to try to entice more Democratic support. Many of them, of course, signed on to that letter, all but three Democratic senators, for example, who said not a penny to the wealthy.

Where does that stand?

Well, look, I'm confident, at the end of the day, we're going to help every American keep more of their hard-earned dollars. The one thing that is different than the regular reforms is, today, it's not just the rates.

Eliminating the AMT, which really hammers a lot of Americans up and down the income tax...

CAVUTO: You're talking about the Alternative Minimum Tax that ensnares a lot of folks, yes.

Yes, and because we also, with current tax code, limits a lot of those deductions and exemptions as you work your way into the higher brackets. Rates alone are not the only indicator.

And so that's really there to indicate that we want to try to help people keep more of what their earn and, maybe more importantly, Neil, drive a very strong middle-class tax cut.

But this idea of a fourth tax level or rate, who would that affect, if it comes to pass? What would that rate be?

BRADY: So, too early to determine if there will be one or what it will be.

That is being left to the Ways and Means Committee and the Senate Finance Committee. Again, I think that's really a recognition that the tax codes aren't just rates anymore because of the complexity.

BRADY: When we simplify it, it changes it.

So, again, at the end of the day, we will continue to make sure this is fair and lowers those rates.

CAVUTO: Chairman, one of the provisions left in here is to address the high-tax situation in a lot of big states, like New York, and Illinois, and California, and New Jersey, et cetera, and removing the deductibility for the state local taxes paid in those particular states.

Now, a lot of your colleagues from these states, that could be a nonstarter, too. By my count, sir, there are 60-plus Republican congressmen who could be affected by that, or at least their constituents could be. And they would be loathe to do this.

Is your message to them that their constituents would still do better, net- net, come out ahead, even if they lose that deductibility?

We want to deliver tax relief all across the country, no matter where you live. And so that's why the tax rates are going down and why we're simplifying to this postcard-style system. That's the best way that we can do that.

Frankly, Washington shouldn't care where you live or where your business is. We just want you to keep more of your hard-earned dollars, and that's what we're focused on.

CAVUTO: What is your sense of support? Now, your committee is one thing. In the Senate, where the numbers are a little closer, it's quite another.

So, I imagine you wouldn't have any problem getting support in your committee. We're going to hear from the House Freedom Caucus and Mark Meadows shortly, sir.

But the idea seems to be, they like it, so safe there. Is it your sense that the Senate, you're going to need Democratic votes there, and they're not there yet?

Look, in the original tax reform plan, we had tax proposals from over 50 members of the House, and nearly 30 Republican senators, as well included in the original plan. I think that's probably gone up.

So, really, this framework with the president, the House and Senate doesn't just include their ideas. It includes their tax cuts. And so I'm hopeful we have momentum all the way through to the president's desk.

CAVUTO: You know, Chairman, you probably heard already, but the Committee for a Responsible Federal Budget estimates that the math might not add up for you, or it's going to be prohibitive to get this through and to meet already the numbers that at least the Senate blueprint is working on, $1.5 billion in likely lost tax revenues over the next decade.

This is something that carries north of a $5 trillion tab. How do you reconcile those numbers? And how do you get the other allowances, deductions to sort of meet the $1.5 trillion cost that your colleagues in the Senate have put together?

BRADY: Yes, so they have got their math wrong, because this is just the framework.

A lot of the details filled in, where the brackets are, what the child credit will be...

BRADY: The Center for Progress in their estimate.

BRADY: Because they're looking at yet an incomplete tax reform proposal.

The president has made it clear it's Congress and our Constitution that decides that we will introduce and draft the complete bill. That's what will do it.

CAVUTO: All right, now, that would have to be a lot of exemptions and loopholes, though, right?

I mean, if you're just conservatively looking at their numbers -- and I understand what you're saying, that these numbers are all over the map. But let's say it's $3.5 trillion that has to be adjusted or reframed here to pay for the $5 trillion-plus tax package, where would that come from?

Just the state and local tax deduction, removing that, I think is about $1.5 trillion over 10 years. Where would the rest come from?

BRADY: I actually question the original premise of $5 trillion in additional costs.

BRADY: So, look, I will look at their proposal in greater depth.

But my guess is, they're making a lot of estimates that may not be true at the end of the day. So, it will be a combination of the growth and clearing out all the underbrush in the current tax code.

CAVUTO: Chairman, the president talked about that 20 percent corporate rate, which is a lot lower than the 35 percent rate now.

But I think, as you and I have discussed over the many months and years, actually, this has been kicked around, that very few companies pay at that rate. It's closer to the high 20s, I think.

So, if the president has said that he wanted to come in at 15, settled for 20, but he doesn't want to budge on 20, is it likely he will get 20, or is it your sense, as it is Speaker Paul Ryan's sense, that it might be somewhere in the low 20s? Is that the closest the math makes sense?

Yes, so we're driving straight to 20. That's why that number is there. And it's significant. One, it is for both the smallest business in America and the largest corporation, almost a 40 percent cut in the rate, so they can compete and win.

Our American companies, like retailers that are just on the ground in our communities, they're paying the full freight.

BRADY: Our international ones, a different rate.

But here's the deal. If we go with the 20 percent rate, they can deploy their capital back to the United States. To have a competitive tax code system, boy, it's a game-changer for our businesses and their workers.

CAVUTO: Finally, sir -- and I know you have got to go, and I appreciate your patience.

CAVUTO: The other issue was the president saying, find a way to take all the trillions of dollars -- it's hard to put the number -- to quantify that number. Some say $2.5 trillion, some as much as $5 trillion that is held abroad.

Would you attach any litmus test or proviso to bringing that money back home, that companies can't just buy shares back or whatever; they have to commit either to jobs or expanding plants and operations, that sort of thing?

No one has yet convinced me a dollar stranded overseas is better than a dollar brought back home here to America for any reasons. So, if a company needs it, whether it's to do research, buy another business in America, grow jobs or try to become more financially strong, that is good for the United States.

CAVUTO: So, you think we could get a deal by the end of the year, or is that kind of wishful thinking?

BRADY: So, that's what we're focused on, this timetable. So, the next key question is getting a budget signed, sealed and delivered. And that's our next challenge.

CAVUTO: You have to have a budget. That's your blueprint to move from there, right?

CAVUTO: OK, and retroactive, the idea that they would -- these tax cuts would be retroactive to the beginning of the year, too late for that?

BRADY: Yes, so, too late, to be determined. Going to be part of the discussions.

CAVUTO: Kevin Brady, I want to thank you very, very much, the man who runs the House Ways and Means Committee.

CAVUTO: They put all this together. He specifically was putting this together when it wasn't cool. All right.