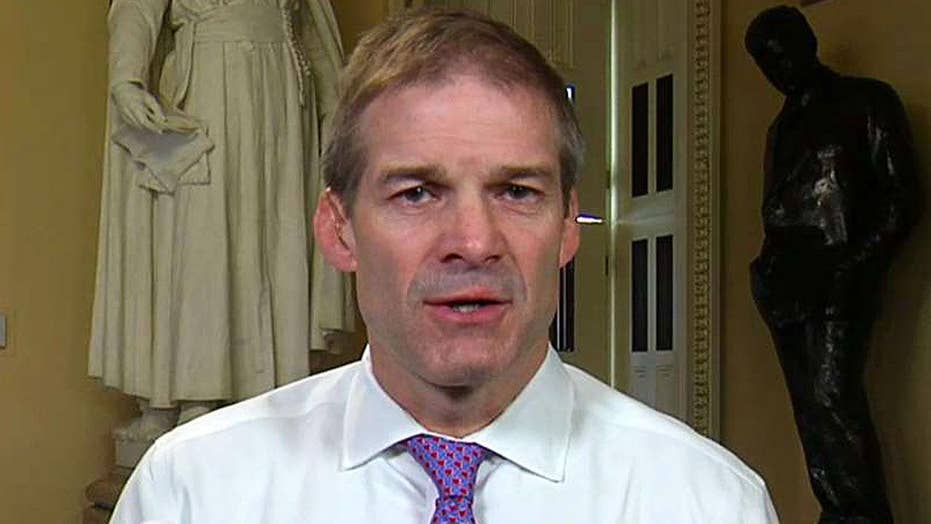 Rep. Jordan: We've taken the health bill and made it better

On 'Your World,' House Freedom Caucus member discusses the support for the new healthcare plan

NEIL CAVUTO, HOST: Now, a lot of this is hinging on getting this health care rework done, and hoping that the second time is the charm.

And to that end, word out of the Freedom Caucus that that group of largely conservative Republicans, close to 30-plus-strong, who are now keen on a new revamped health care rework that does put more power and control in the hands of the states.

Now, the question is, if they have gotten that kind of support, will it offset the likely peeling off of some moderate Republicans who might not like some of the concessions to conservative Republicans?

I say any of this because it's crucial toward getting the tax cut thing passed, because they are working on that health care rework as sort of providing the baseline for tax cuts, so, a lot of things that have to be just right.

Where do you stand on this concession or agreement that seems to give more control to the states?

CAVUTO: Does it mean that you would support a health care measure now if it were to come up for a vote or what?

JORDAN: Yes, sure would, Neil.

We think we have taken a bill and made it better. Because of the engagement of conservatives, we got work requirements for able-bodied adults in the Medicaid expansion program. The tax increases are going right away. In the initial draft version of this ball, there were taxes, ObamaCare taxes, that stayed in place longer.

Those are going right away. And now we're going to give states the ability to get out of those key regulations that are driving up premiums, while protecting people who have real health concerns and preexisting health concerns.

So, we think we have made a bill much better. It's not full repeal. I will be honest, it's not. But it's as good as we think we can get right now. And let's get it to the Senate and work even harder over there to do what we told the voters we were going to do.

CAVUTO: All right, so, as I understand it, Congressman, without getting too knee-deep in the weeds, it allows states to opt out of some of these insurance regulations within the Affordable Care Act.

CAVUTO: Gives them some freedom here.

You're free also not to offer some health benefits that are included right now, again, up to the states, what have you.

CAVUTO: But wouldn't some moderate colleagues of yours look at that and say, well, that's not going to fly with me? So in order to win over you guys, you have lost some of the moderate guys?

JORDAN: Well, we will see. I don't think so, because remember, in this bill, there's $115 billion in this bill to set up those safety net provisions, what we call high-risk pools at the state level.

That money is there for that situation. And we have always said, if you maintain continuous coverage, you are going to be able to keep coverage. But, at this same time, there are certain regulations that drive up the cost of health insurance.

CAVUTO: All right, now, that would apparently then set the stage for getting the tax cut thing through.

CAVUTO: Do you think late summer, fall? What do you think?

JORDAN: I think so.

And I think it's critical that we do that. I do think it's important that the BAT tax not be part of the overall tax reform. I think there's a real problem with that. But a simpler, flatter, fairer tax system makes so much sense. We need to get it done.

CAVUTO: So you don't like these tax hikes to pay for tax cuts?

When did Republicans adopt the idea that we have to do this in a revenue- neutral way? That's just a fancy way saying, we're all going to pay the same taxes, we're going to shift who pays what. And typically that means the people who have connections here in Washington wind up with the better deal.

Let's just design a tax code that is conducive to economic growth. Let's focus on that.

CAVUTO: But the well-to-do will have a better deal. Right? Maybe...

CAVUTO: They pay the most in taxes, they will get a bigger tax cut. So, your Democratic colleagues -- we will talk to Steny Hoyer later, sir -- will say, well, this is a boon to the rich.

JORDAN: You design a tax code that is conducive to growth, everybody benefits, as evidenced by what took place back in the late '80s, which you started your program off on.

That's what we need to do, create a tax code that is conducive to growing our economy, creating jobs and oh, by the way, what happens, is then the Treasury does get additional revenue, because you have had real economic growth, not just 1 percent growth.

CAVUTO: So, you don't think you have to pay for this up front, in other words, that the growth will pay for this entire tax cut?

JORDAN: I think you have to design a smart tax code.

So if you have a tax code that is both broken and stupid, you might want to redesign something. That is what this is about. And why not redesign it in a way that is conducive to economic prosperity and economic growth?

CAVUTO: All right, Congressman, thank you very much for taking the time.

CAVUTO: I know you guys have had a crazy day. All right.