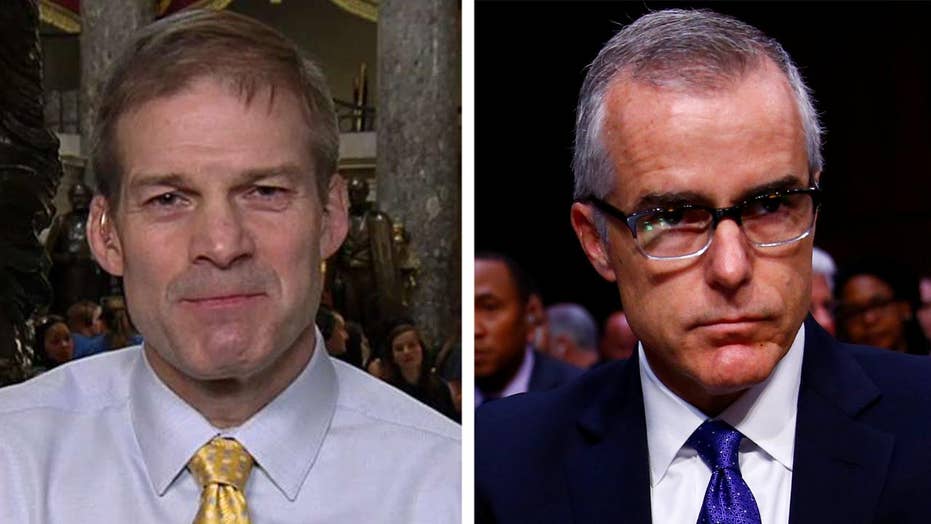 This is a rush transcript from "Your World," April 13, 2018. This copy may not be in its final form and may be updated.

NEIL CAVUTO, HOST: In the meantime, a lot of concern about what the reverberations of this report, as I was trying to raise to Catherine Herridge, is the I.G. was fingered by no less than the president, who was concerned at the time that he would not issue a fair report, that he was a holdover from the Obama administration, and he might not be impartial in that, of course, anything by it.

It was a very damning report on Mr. McCabe, and seems to hint right now that he had an innate bias against the president of the United States, and we already know how James Comey, the former FBI director, felt about Donald Trump in a book that has come out with a lot of salacious comments and allegations.

So if the number one and two were of a mind-set not to like one Donald J. Trump, it isn't to stretch to a number of Republicans to assume that that might be a loaded investigation against the president.

With us now is Ohio Republican Congressman Jim Jordan.

What do you make of all of this?

So, obviously, there are big problems at the top levels of the FBI. And this report today just confirms what we already knew. Andrew McCabe misled the people four different times.

CAVUTO: OK. But having said all of that, you still do not believe it would be wise to fire Bob Mueller or to stop this ongoing investigation?

JORDAN: Yes, the White House has been very clear they're not going to fire Bob Mueller.

But I do think, if you want a great example of the swamp, think about this. Rod Rosenstein writes the memo for firing James Comey. James Comey leaks information to The New York Times to get Bob Mueller to be the special counsel.

This is crazy. But if you want to see what the swamp looks like, I don't know of any better example than that.

CAVUTO: So, let me ask you about the so-called stacked deck that people are referring to.

If you already know how James Comey feels -- and it's come in these interviews through this book -- we already know what Andrew McCabe has said, and now what an inspector general has reported about multiple times he has lied to investigators, you do have to sympathize a tad with the president, who says, they really are out to get him.

JORDAN: Of course. Well, of course.

And look at the contrast. When Michael Cohen's place gets raided, it is a pre-dawn raid on his business and office, grab everything. When Secretary Clinton was in front of the Benghazi committee, and I asked her a question, I said, would you agree to a neutral third party like a retired federal judge to let him or her examine your -- all your e-mails and determine which ones are personal and which ones we are entitled to on the committee, she wouldn't agree to that.

The president and Michael Cohen would love that deal today, because I they just come in and got everything, vs. Secretary Clinton, where the FBI calls up Cheryl Mills and says, hey, Cheryl, would it be OK if we stop over and get the e-mails that you think we are entitled to see, you, as her lawyer?

This is the part that probably more than anything else drives Americans crazy, this -- this double standard or, more importantly, these two standards that they now see in the Justice Department.

CAVUTO: But if you are convinced, as many are now, right now, that maybe this is a stacked deck investigation, what then about what to do with Rod Rosenstein.

Now, he, we are told, was at the White House within the last 48 hours. Do you think he should go?

JORDAN: If things do not improve dramatically with, for example, for Congress getting the documents we are entitled to, then I think everything should be on the table, from contempt, to impeachment, to calling for his recognition.

I just think that is obvious. We met with the new guy, the new point person, John Lausch, Congressman Meadows and I did a few days ago, on how they are going to get the documents in a better fashion than they have been. And the team of lawyers he brought in, they could not answer four fundamental questions.

What is the universe of the documents we're entitled to? They did not know the number. I said, what is the standard you use for redactions? They couldn't explain that. How many steps are involved in the current process? They didn't know the answer to that.

And then, of course, the important question, when are we going to get what we are entitled to, as a separate and equal branch of government? They could not answer that either. So, this thing has to improve dramatically and in a very short time frame, or I think everything is on the table.

JORDAN: We can do in Congress is contempt and impeachment.

But when you read this report about Andrew McCabe, go to page 11 and read the bullet point eight. This is how bad it was. Andrew McCabe sends a person out to leak information to The Wall Street Journal.

They print the story the next day, and then he calls up two other people in the FBI and says, hey, what is with these leaks in The Journal? You talk about scheming. You talk about crafty. That is what he did.

And then to, add insult to injury, he lies about that when he is being investigated by the OPR and the inspector general. That is the kind of scheming that was going on at the very highest levels of the Federal Bureau of Investigation. And that's what troubles me, what troubles you, and, more importantly, what troubles all of America.

CAVUTO: Do you think Comey knew all about this?

There are signs in this report, depending on what you can believe or trust, that Comey wasn't aware of all this stuff McCabe was doing, or that McCabe was withholding information from Comey.

But, bottom line, the number one and number two didn't seem to be in communication with each other.

JORDAN: Yes. It looks like thus far that Mr. Comey didn't know what Andrew McCabe was up to in that specific situation with this leak.

But Mr. Comey has a leak problem of his own. Obviously, he leaked a government document through a friend to The New York Times back when he was fired. I think he has got a leak problem as well.

I just don't think either one of these guys are all that credible, and I think the American public has reached the same conclusion.

CAVUTO: Now, I know you have not had a chance probably to read Mr. Comey's book, but it comes out at a time when a lot of people are questioning his own veracity and whether he was consistent on the Hillary Clinton investigation, which seem to anger Democrats at the time.

And now post his relationship with the president, now the president of the United States, Donald Trump, is it your sense -- now, obviously, they're printing a lot of books, better than 800,000, in advance of what they expect to big demand for that book. What do you think?

JORDAN: Well, we will see how the book -- how it sells.

I think Andy -- or -- excuse me -- James Comey messed up this investigation into Secretary Clinton from the get-go. I criticized him in July when he came out and did his big press conference and his big report and said they were not going to prosecute.

And then I was one of the few Republicans who criticized him in October, 10 days before the election. I thought he shouldn't have done that either.

But I think he was wrong throughout all of this. I think, from the get-go, when Loretta Lynch told him, do not call it an investigation, call it a matter, and he complied with that. Everyone knew it was an investigation.

So, I think from the get-go he messed this thing up. I think he has very little credibility on this issue. And I think both him and Mr. McCabe leaked a lot of information.

CAVUTO: All right, in the meantime, the president pardoned Scooter Libby today, as you know, Vice President Dick Cheney's former chief of staff.

CAVUTO: Some said that this might have been a signal that the president doesn't really like when investigations go, veer wildly off-track, and that he is sending a signal he would do the same if there were people who were swept into something similar this go-round.

JORDAN: That may be the case. Obviously, you would have to ask the White House, ask the president.

What I think that it mostly says is, he pardoned Scooter Libby, because he felt that is what he should do. I don't recall all the facts around the Scooter Libby situation several years ago.

I do remember reading at the time that I felt he was getting a bad deal, and would support what the president did. As the timing goes, obviously that is a question for the White House.

CAVUTO: All right, just to be clear, though, Congressman, you think if the president were to move now to get rid of any of the principals behind the Mueller investigation, including Mr. Mueller, by extension, Rod Rosenstein, you think that that would be a mistake?

JORDAN: I don't think the White House has indicated they're going to remove any of the principals, Sessions, Rosenstein, or Mueller?

JORDAN: I think if the Justice Department doesn't clean up their act and start giving the information that we, as a separate and equal branch of government, are entitled to, I think everything should be on the table as far as Congress goes.

CAVUTO: All right, sir, thank you, very, very much. Good catching up with you.