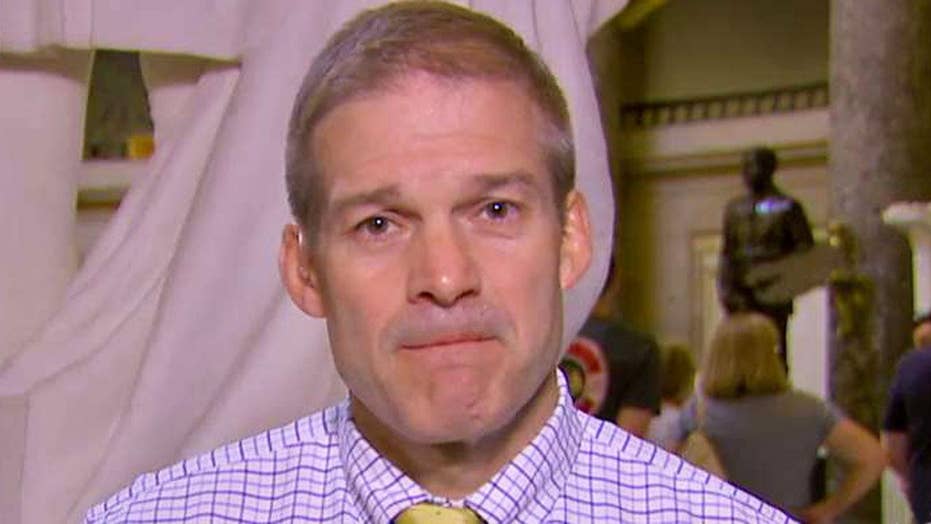 Rep. Jordan: Let's get done what Americans elected us to do

This is a rush transcript from "Your World," June 7, 2017. This copy may not be in its final form and may be updated.

NEIL CAVUTO, HOST: In the meantime, the president has a very busy agenda that he wants to get done, for example, just in Ohio today talking up infrastructure, a trillion-dollar plan over 10 years he says is doable, wants the leverage off of that to quickly get tax reform done, a rework of the health care law.

In fact, he met with a lot of families he said were really adversely affected, severely so, by ObamaCare.

Ohio Republican congressman is a pretty big cheese in all that. He's also a Freedom Caucus member. He joins us right now.

Congressman Jordan, very good to have you.

REP. JIM JORDAN, R-OHIO: Good to be with you, Neil.

CAVUTO: First off on this Comey stuff, I know it directly doesn't concern you for the time being.

CAVUTO: But could it concern the president's agenda or lead to this distraction talk that delays action on any of the stuff you and the president want to do?

And like you were just talking about, you know, nowhere in there does -- it says specifically that the president wasn't under investigation. Nowhere does he talk about any type of obstruction of justice.

So, we will see what happens in tomorrow's hearing. But our focus is of course to get back on the agenda that the American people elected us to do and that's what the president is talking about today in Ohio.

CAVUTO: All right, one of the things he brought up is this infrastructure deal, where you spend $1 trillion over 10 years.

CAVUTO: I think it would be $200 million in government money up front, I guess leverage off of that for the other $800 billion. I didn't quite understand.

But as a Freedom Caucus member and as a group of largely conservative congress men and women, you guys are not really keen on going into the red to spend. Maybe for tax cuts, you're open to that, but how do you feel about what the president wants to do on the infrastructure?

Look, we understand infrastructure is a fundamental part of what government is supposed to spend taxpayer dollars on. But we also understand you have got to look at the broad context of the fact that we have got a $20 trillion debt.

So, we want to see the proposal. We think it has merit, but let's do it the right way. Let's do it in a fiscally appropriate way and let's do it in a way that recognizes the debt burden that we now have on our country and on future generations in this country.

So, that's how we look at it. We do think you have to do the other things. We have got a big agenda. That's why yesterday we said we think we should consider being here in August to get done what the American people elected us to do.

We have got the health care reform we still have to get done. We have got a budget we got to do. We got a reconciliation tax package. We got the appropriations process and a debt ceiling process, not to mention what the president is talking about today, an infrastructure project.

CAVUTO: All right, so let's leave for the time being, Congressman, this whole Comey stuff and what happens and the drama around that.

CAVUTO: And I know you guys can walk and chew gum at the same time, or so I hear.

So, I want to know about the time frame for this. I mean, you guys are off the month of August essentially. Do you think your colleagues should stay in town to get this stuff done?

JORDAN: Yes, we took a position last night at the Freedom Caucus.

We took the position we should in fact be here to get the work done the American people have elected us to do. I say this all the time. I have said it on your show, Neil. We make this job way too complicated.

What did we tell the folks we were going to do back home when they elected us? Let's focus on that. And if that means being here in August, most of the constituents I serve, they are working in August. Maybe we should be doing the same thing to get these big things done.

CAVUTO: What have they told you, Congressman? Are they OK with that?

JORDAN: Well, we will see. No one is doing cartwheels right now in support of what we said, but...

CAVUTO: What if Democrats say, no, they don't want to do that, but Republicans say yes? Can you go ahead, given your tenuous majority, and go and pass legislation without them?

JORDAN: Sure. The speaker of the House and the majority leader set the calender. So, it's Republican-driven. So, we will see what happens. But we said yesterday let's get done what the American people elected us to do.

CAVUTO: All right, Congressman, thank you very, very much.

JORDAN: You bet. Thank you.