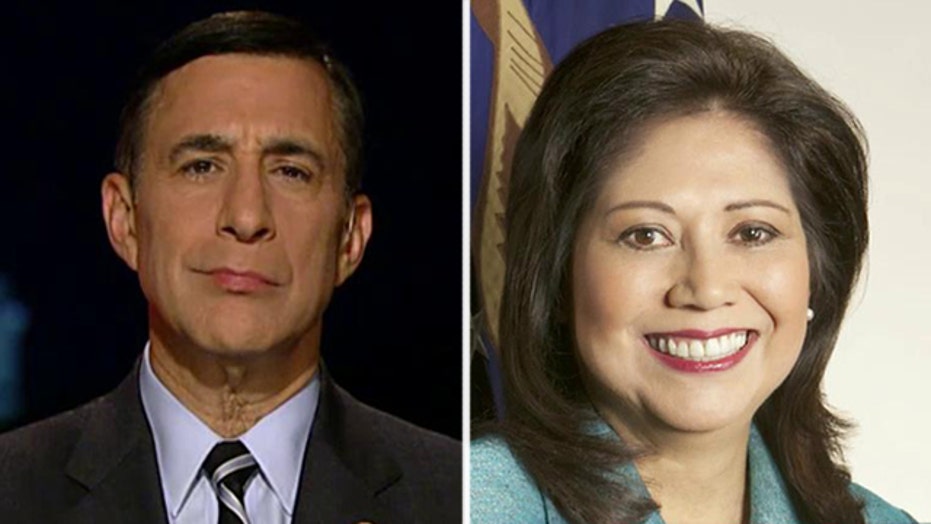 This is a rush transcript from "The Kelly File," July 16, 2014. This copy may not be in its final form and may be updated.

MEGYN KELLY, HOST: Breaking tonight, new follow up from a just released audio recording allegedly showing a former White House cabinet member breaking the law to help get President Obama reelected. On the tape you can hear it sounds like -- we are told it is -- Former Labor Secretary Hilda Solis in 2012 calling a subordinate in her department who works for her and then illegally soliciting campaign donations for the president's reelection campaign. Listen

HILDA SOLIS, FORMER U.S. SECRETARY OF LABOR: This is Hilda Solis calling. Just calling you off-the-record here. Wanted to ask you if you could help us get folks organized to come to a fundraiser that we're doing for Organizing for America for Obama campaign on Friday at La Fonda at 6 PM. There are a lot of folks that we know that are coming but wanted to ask you if you might help contribute or get other folks to help out.

KELLY: Congressman Darrell Issa is chairman of the House Oversight Committee and today he played that audio recording for the first time in public. Your democratic counterpart accused you of playing a stunt. He thought this was inappropriate. This was a top cabinet member breaking a law as I understand it. Is there any dispute it's her?

REP. DARRELL ISSA, R-CALIF.: There's no dispute. She was found who have violated the Hatch Act and resigned along with Secretary Sebelius who had a similar misuse where she used government funds to do a campaign event and then when it was discovered, she retroactively paid back but she'd so committed the Hatch Act violation.

KELLY: Hatch Act is you're not allowed to solicit campaign donations when you're working in the executive branch. It's -- it puts undue pressure on the people who work for you and it's an abuse of your power.

ISSA: Exactly. And Hilda Solis who I served within Congress knew from Congress that soliciting your subordinates or people who work for you in Congress was also a violation -- different act but a violation. So this was not new -- it will not be a Cabinet officer.

But you understand today in our hearing as we played that and my ranking member is and has been in denial that the anything to be wrong in this administration -- the real offense was that a political appointee, a none Senate confirmed political appointee who heads up the political affairs division, it's just been stood back up in the White House --

KELLY: Just to jump in, so Congressman Issa is now moving to a different but somewhat related issue where he feels that he's been obstructed. So go ahead, sir.

ISSA: It's related because the hide check is under our committee's jurisdiction. We were doing oversight. We asked this individual David Simas who is now stood back up something that President Obama shut down because it was found by special council to be illegal. He stood it back up. And we want to know how it works. We want to make sure it doesn't violate the Hatch Act. The president asserted to his council the most absurd claim which was that there was an inherent immunity from coming to Congress by this political appointee, and he didn't show up. And this sort of --

But not to worry because DOJ is allegedly looking into Ms. Solis and her violations. So we should all rest easy tonight, correct?

ISSA: No, not so much. Ultimately, the American people need to know and they need to have confidence that their tax dollars are not being used as the IRS did to go after political if you will at means of the president, the Tea Party and group. We need to know that they're not using the power of the presidency and the money of the tax payer to campaign for people in this upcoming election.

And every chairman who's have my job before that has had a role in trying to make sure that doesn't happen..

KELLY: And before I let you I go.

KELLY: -- in related to news tonight, the DOJ will now investigate these missing Lois Lerner e-mails. Can you confirm that?

ISSA: It's a start. They said that they now are going to look at it. Quite frankly we still want a special prosecutor. We want somebody who is immune from the influence of Eric Holder, a man who has held in contempt by Congress.

And more importantly, we have a witness that didn't show on a lawful subpoena. It's already been decided by the courts that this individual must come. We expect that they're going to have to bring him. If they don't.

ISSA: -- we have a very little choice but to assert our rights to Congress. We hope that he'll continue to cooperate.