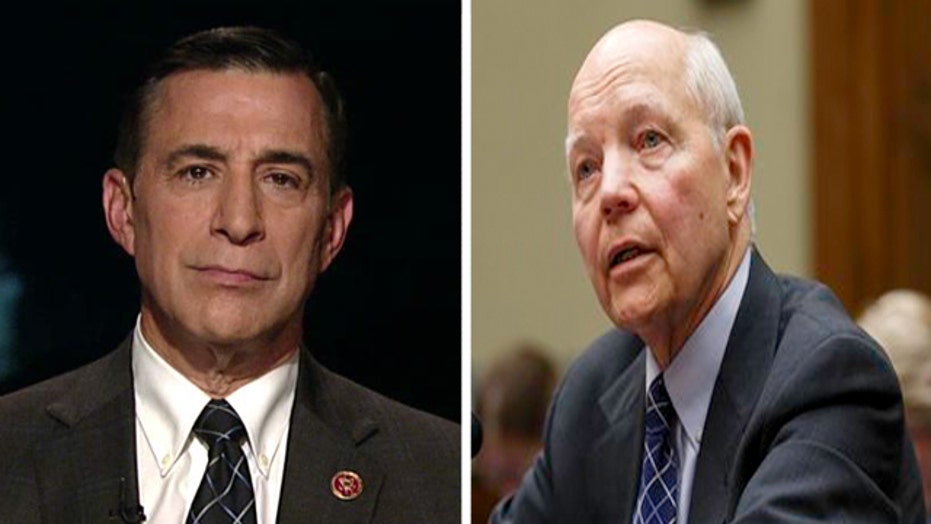 This is a rush transcript from "The Kelly File," June 25, 2014. This copy may not be in its final form and may be updated.

MEGYN KELLY, HOST: Developing tonight, new evidence of IRS misconduct. The tax agency admitting today in court that it inappropriately leaked the confidential tax documents of a conservative group in the middle of the presidential race. The documents just happened to reveal Governor Romney's financial donation to a traditional family group. The IRS now confirming it did that and agreeing to pay $50,000 in damages. However, it claims its disclosure was inadvertent.

This as the IRS chief takes fire from congress this week on his claim that the tax agency has not broken any laws.

REP. TREY GOWDY, R-S.C.: You have already said multiple times today that there was no evidence that you found of any criminal wrongdoing. I want you to tell me what criminal statutes you've evaluated.

JOHN KOSKINEN, IRS COMMISSIONER: I have not looked at any.

GOWDY: Well, then how can you possibly tell our fellow citizens that there's no criminal wrongdoing if you don't even know what statutes to look at?

KOSKINEN: Because I've seen no evidence that anyone consciously --

GOWDY: Or how would you know what elements of the crime existed, you don't even know what statutes are at play. I'm gonna ask you again. What statutes have you evaluated?

KOSKINEN: I think you can rely on common sense that nothing I have seen --

GOWDY: Common sense, instead of the criminal code. You want to rely on common sense. No, Mr. Ko -- you can shake your head all you want to, commissioner. You have said today that there's no evidence of criminal wrongdoing, and I'm asking you what criminal statutes you have reviewed to reach that conclusion.

GOWDY: But you are not saying there was no criminal wrongdoing with respect to the targeting of conservative groups. I want to be very clear, you're not saying that.

KOSKINEN: I've made no judgments.

GOWDY: So, you disagree with the president when he says there's not a smidgen of corruption?

KOSKINEN: There are people who have been making judgments, both sides about whether they were --

KOSKINEN: Well, you have the evidence that there's no e-mails from the White House. You have all of the treasury e-mails, so the basic premise that this was an argument and a conspiracy driven by the White House does not --

GOWDY: No, sir, you're wrong about that. You're wrong about that. You're repeating a talking point from our colleagues on the other side that we're obsessed with the White House. It was Jay Carney who perpetuated the myth that it was two rogue agents in Ohio. It wasn't any of us. Was that accurate? Was that first an initial line of defense that is just two rogue agents in Ohio, was that accurate, commissioner?

KOSKINEN: Not that I know of.

GOWDY: All right. So, that wasn't accurate and that came from the White House. Who said there's not a smidgen of corruption? Who said that, commissioner?

KOSKINEN: My understanding is that was the president.

GOWDY: It was the president. So that's Jay Carney and the president both inserting themselves into the IRS scandal, and you wanna blame us for bringing the White House into it?

KOSKINEN: I haven't blamed you at all --

KELLY: Joining me now, Republican Congressman Darrell Issa, who is chairman of the House Oversight Committee, the committee that was just grilling the IRS commissioner this week. Mr. Chairman, good to see you tonight. A

nd so, there was Trey Gowdy going after Mr. Koskinen who by all accounts was described as very arrogant in his demeanor in front of you this week. Should the American people be trusting that man to lead this investigation internally in terms of compliance with your demands and that now that's being raised by the U.S. Senate?

REP. DARELL ISSA, R-CALIF.: Well, Megyn, it was Senator McCaskill, who describe a democratic senator, who described him as arrogant. Eighty percent of the American people don't believe they're telling the truth about these drives and the lost data or particularly the question of targeting conservative groups, and, of course, a democratic political appointee of the president, confirmed by a democratic Senate on a less than 60-vote requirement is not the ideal person, not even an appropriate person to investigate these crimes. But Megyn, you now know neither is Eric Holder. This case calls for a true special independent prosecutor who has the ability to issue warrants, to seize materials, to safeguard documents and other information before it goes away and get to the truth.

KELLY: And it's not gonna happen.

ISSA: It's not gonna happen on this president's watch or Eric Holder's watch as far as we can tell, but little by little we're finding information. We're finding documents, and each time we find them they come up and have a new discovery. You know, the reason that we discovered that these documents were really gone is from a subpoena to the Justice Department. Lawyers there decided they didn't want these 1.1 million documents that they never should have gotten, that they got from Lois Lerner in violation of the statute 6103, in other words, a law that was broken. They wanted rid of them so they gave them back to us and then we discovered e-mails from Lois Lerner as a result that we'd never seen and documents with personal information, donor information given to the Justice Department by Lois Lerner for the purpose of going after these conservative groups. And it's about time her attorney take back that statement she made, that perjured statement that she broke no laws, she broke no regulations. Of course she broke laws and of course she broke regulations and we need to hold her accountable.

KELLY: Let's talk about Lois Lerner because there was breaking news about her today and Senator Grassley. I think the American public is interested in this woman, because she inserted her Fifth Amendment right, she's at the center of the targeting scandal, no matter whether you believe she's innocent or not, she's at the center of it. And tonight we learned inadvertently Lois Lerner received a letter and the letter was meant to go to Senator Grassley, a Republican, and they were suggesting that he take some trip and give some speech and they were suggesting they might pay for his wife to attend as well.

Lois Lerner, who is inadvertently receiving this piece of mail, then forwards it along within the tax agency suggesting an audit that either Grassley or this group sending the letter or both should be audited because it's not appropriate for them to pay for his wife's travel, something he never agreed to. He never even received the letter, no proof he even knows this group. And the question is whether this now gives us a window into Lois Lerner and how she approached her job.

ISSA: Well, we have windows into Lois Lerner. This one being the latest one, that she was in fact a biased not conservative but liberal on a liberal agenda. Her personal e-mails back and forth to her daughter on government time and government e-mails, we read them and realized that this is somebody who supported the president, his attempt to close down conservative groups, his opposition to Citizens United. Her -- quite frankly, this leak that you talked about at the top of the hour, she's somebody who applauded Maryland's gay marriage statute in e-mails with her daughter. This is somebody who had an agenda and acted on it, broke laws, broke regulations has been criminally referred by the Ways and Means Committee. They have elements that they've sent to Eric Holder. Of course, those are dead on arrival in all likelihood.

The reality is we need a special prosecutor and we need to realize Lois Lerner's committed crimes. She may be the kingpin but we'll never know if we don't get the kind of investigation we need to do.

KELLY: Can she get immunity and give you the information that you need?

ISSA: Absolutely. If she would proffer, if she would deliver to us the explanation of who she worked within this conspiracy. Who gave the order?

KELLY: And that's how it's work. The given immunity somebody gets a proffer. This is what I would say, Mr. Issa, if you gave me immunity. She won't do it.

KELLY: One question before I let you go. You heard there that Koskinen, the head of the IRS was saying you have the White House e-mails and you have Treasury's e-mails and those show there was nothing nefarious going on. Tonight the Senate has joined in on your investigation saying we don't trust the IRS in the wake of these lost e-mails and we want Treasury and -- not the White House, this list, but the Treasury and two other agencies, two including the Justice Department, to produce their documents, their correspondence with Lois and the other employees who claim their e-mails are lost. Will that advance the ball because Koskinen says you already have that stuff and it doesn't show anything.

ISSA: Well, it's a good start. The commissioner was being disingenuous when he said this because, stating that there is no evidence, there are no e- mails is pretty tough for an agency that just admitted they don't store them. They don't track them. They lost them. And remember, if Lois Lerner's hard drive hadn't broken she could have just deleted them anyway. They didn't have a procedure to safeguard these documents from mischievous behavior of people doing things.

So, quite frankly the commissioner is not believable. Paul Ryan said it. I'll echo it. We just don't believe him.

KELLY: I have to ask you before you go. When Koskinen got sworn in, arrogant or not, you gave him a hard time about keeping his right hand too low on the swearing in. Let me show the viewers what I'm talking about.

ISSA: Would you please rise to take the oath and raise your right hand. A little higher, thank you.

KELLY: Some said that made you look arrogant. Why did you do that?

ISSA: Well, you know, in his previous testimony he had held it down, and, you know, we all understand whether you're looking years back at the tobacco hearings or anything else, you raise your right hand. All I really asked was that he raise it to a normal level. I only asked it because in fact at the Ways and Means Committee earlier he had sort of held it down and it seemed a little petty and silly.

We've had witnesses who have stepped away from other witnesses and so on. We just ask them to do the routine ordinary you raise your hand. There are photographers taking pictures of it. It is a moment and it should look that way. That's all.

ISSA: There was no attempt to be arrogant. In fact, this gentleman came in with a great deal of respect in Washington. I'm sorry that he's losing it with a certain amount of half-truths that he's been involved in.