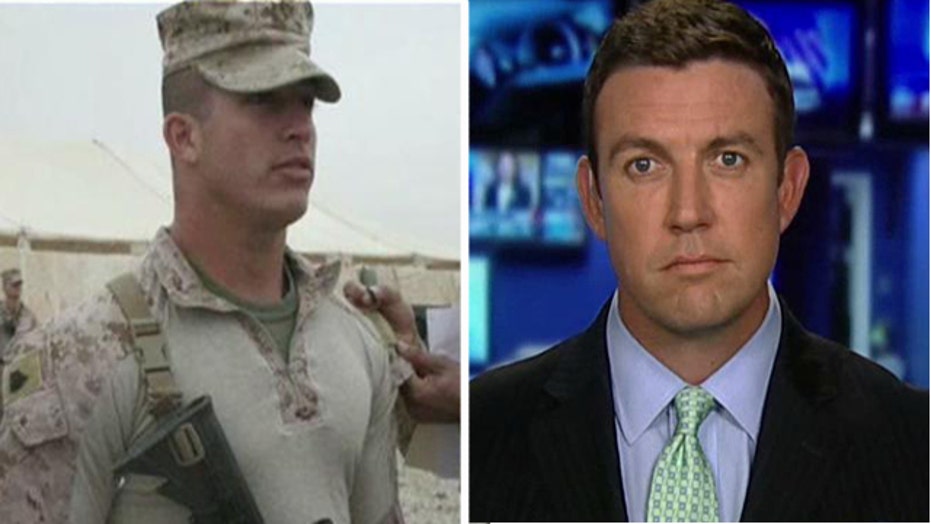 Rep. Hunter demands for release of Marine jailed in Mexico

This is a rush transcript from "The Kelly File," May 6, 2014. This copy may not be in its final form and may be updated.

SERGEANT ANDREW TAHMOORESSI, MARINE CORPS: I said I have three guns, and I showed them where the guns were, and they check out the guns, and I say I didn't even mean to be in Mexico. It was a mistake for me to be here. Can I just go back to the border? Five minutes later I was surrounded by like 20 military officials and police officers with guns watching me.

MEGYN KELLY, HOST: Well, that was Marine Corps Sergeant Andrew Tahmooressi describing what happened after he apparently missed an exit while driving south in California, in a nightmare chain of events that landed him in Mexico and then in a notorious Mexican jail for weeks now.

Today, one lawmaker now writing Secretary of State John Kerry directly demanding that the United States do whatever it takes to bring this sergeant home. That lawmaker is Congressman Duncan Hunter, himself a veteran. Congressman, good to see you.

So this sergeant was suffering from recently diagnosed Post-Traumatic Stress Disorder. He had three guns in his car which are banned in Mexico, and he entered Mexico saying that he got lost trying to reach a different destination in California. How confident are you that this was genuinely an innocent mistake?

REP. DUNCAN HUNTER, R-CALIF., HOUSE ARMED SERVICES COMMITTEE: I am very confident. For those people that don't live down by the border, they're doing a lot of construction work down there. It's actually very easy to get turned around, and what happens is, if you miss the last turnoff and you're just kind of driving and you're zoned out thinking about something, you can then cross the border and then you're in Mexico, and then guess what? You have no power. You're not covered by the Constitution anymore and the federales can put you in jail.

KELLY: How concerned are you for his safety? We've told that he's been held in a prison that was built for 2,600 prisoners but it has more than 7,000. His mother claims that hit men were threatening to beat, rape, and kill him. He's reportedly stabbed himself in the neck after experiencing some trauma there.

But what this shows me mostly is the impotence and ineptitude of John Kerry and the State Department. You don't have Middle East peace, you can't stop Putin from crossing his own borders into free countries and you can't get a former marine out of a Mexican jail.

This administration frankly I don't think cares about this marine and I don't think that Kerry has the power to do anything about it. This is going to take the American people caring and, frankly, the American -- or the Mexican attorney general probably has the best -- he's in the best seat here to take care of this.

KELLY: How do you know the State Department is not doing anything? Because they've refused to comment.

HUNTER: Yes. Because they have a really, really bad track record. When my dad was in Congress in the '90s, he went down to Mexico to literally free a marine out of Tijuana jail because the State Department can do anything. This happened again about four or five years ago. State Department couldn't do anything. If the State Department does do something and they actually can notch one success under their belt with this administration, then God bless them. I just don't think they have the ability to do it. That's why we're going to go straight to the Mexican attorney general.

KELLY: Wow. Meantime, a couple of months ago some Mexican border guards came across the U.S. border, drew their weapons in Arizona in a standoff with U.S. border patrol agents, and we allowed them to turn around and we did nothing. We chalked the incident up as unfortunate but unintentional. That's how we behave when someone makes a mistake on our territory. Not so much our friends down south of the border.

Congressman, good to see you.