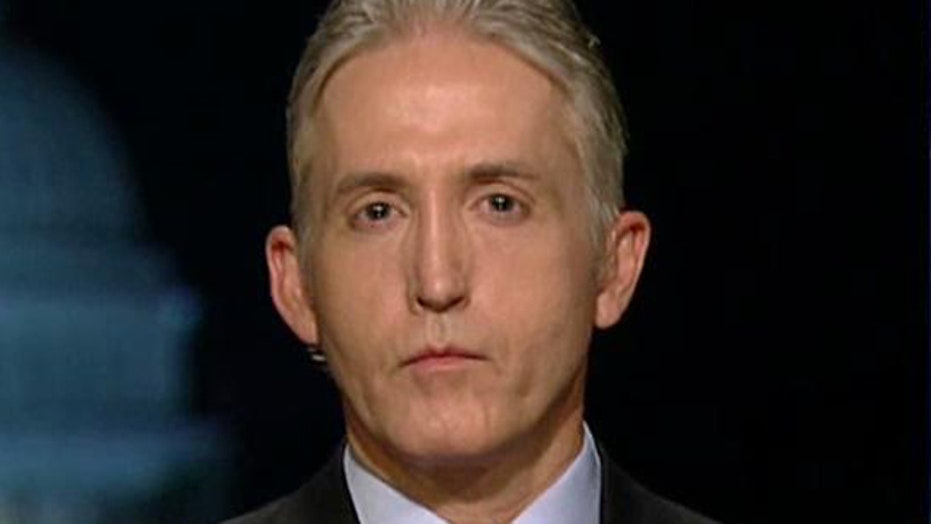 Rep. Gowdy on why Obama is brushing off scandal questions

Congressman reacts to the president's comments on Benghazi, IRS

This is a rush transcript from "The Kelly File," February 3, 2014. This copy may not be in its final form and may be updated.

MEGYN KELLY, HOST: The lawmakers who have investigated the Benghazi attack also picked up on the president's remarks. And one, Senator James Inhofe, did not hold back.

SEN. JAMES INHOFE, R-OKLA.: It's just an outrageous lie, it is kind of hard to call it anything else. It's kind of like ObamaCare -- and I would say this to my dying day, I know people don't realize it now, but that's going to go down in history as the greatest cover-up. And I'm talking about compared to the Pentagon papers, Iran-Contra, Watergate and the rest of them. This was a cover-up in order for people right before the election to think that there was no longer a problem with terrorism in the Middle East.

KELLY: Joining me now, South Carolina Republican and member of the House Oversight Committee Trey Gowdy, who has sat in on multiple hearings on Benghazi and the IRS scandal, another issue that came out last night. We'll get to that in a minute.

Congressman Gowdy, great to see you tonight. And so, the president basically told Bill on the subject of Benghazi that, look, people just don't know at the very moment exactly why something like this is happening, and it wasn't just some systemic, well-organized process. Those were his reasons it seems for not being more direct about the fact that this was a terrorist attack.

REP. TREY GOWDY, R-S.C., HOUSE OVERSIGHT COMMITTEE MEMBER: Well, then he needs to read the e-mails from the State Department because on September the 12th, less than 12 hours after the siege ended, his own State Department in an e-mail to the Libyan ambassador said, we know who do it.

So, his own State Department knew within six hours of the siege ending that this was a terrorist attack. So, I would encourage him to spend more time with Secretary Clinton. By the way, Cheryl Mills was copied on that e-mail and so was Patrick Kennedy.

KELLY: Well, he also said, it was, you know, there may have been some bad guys but there was also people taking advantage of the moment and so on and so forth, and didn't really speak to the evidence about, you know, what was happening on the ground and how well the attackers knew the layout of the consulate, they knew where to find Ambassador Stevens, they knew the location of the cans of gasoline, they used military hand signals to communicate with each other.

So, you know, the suggestion, is just sort of, you know, mostly these guys who got together and decided to cause some havoc, is not exactly dead on.

However, let me ask you about the president's suggestion that this scandal, Benghazi, is really being kept alive by Fox News and it's not a scandal. And the only reason people think it is despite the fact that four Americans are dead, is because we at Fox News have decided to make them believe that.

GOWDY: Megyn, I can tell you this, there are four murdered Americans and I am asked about Benghazi more than any other issue. And that is true in South Carolina, it is true in Texas. It was true 30 minutes ago --

KELLY: But that's because your viewers may watch Fox News. I mean, they're taking the president's logic a step further, he'd say that your people must be watching Fox.

GOWDY: Well, it maybe or it may just be that people knew, this is having nothing to do with politics. And about who we are as a country that four of our fellow citizens were murdered, that we weren't prepared to provide for their security, that we didn't go help them during the siege and then Susan Rice lied about it on five different Sunday talk shows. That maybe it has nothing to do with politics.

KELLY: Let me shift gears and asked you about the IRS. That's another scandal the President claims is ginned up by Fox News. And he said, there's not a smidgen, I think it was not a smidgen, of evidence that there is corruption at the IRS. And here's -- do we have Carney as well? All right, watch.

O'REILLY: So you're saying there's no corruption there at all?

OBAMA: That's not what I'm saying.

O'REILLY: No, no, but I want to know, you're saying, you're the leader of the country. You're saying no corruption? None?

OBAMA: No. There was some bonehead decisions out --

OBAMA: Not even mass corruption, not even a smidgen of corruption.

UNIDENTIFIED MALE: Did the president misspeak?

JAY CARNEY, WHITE HOUSE PRESS SECRETARY: No, he didn't. I have about 20 of news organizations that cite the variety of way that was established, including by the independent i.g., who testified in May. And as his report said, that he found no evidence that anyone outside of the IRS had any involvement.

UNIDENTIFIED MALE: Isn't there an active Justice Department investigation into this matter?

CARNEY: Obviously we do not interfere with Justice Department investigations.

GOWDY: Well, my thoughts are that two days ago, we got a letter from the Department of Justice, from James Cole, Jimmy Jordan -- the congressman from Ohio saying he can't send a prosecutor to update us on the IRS scandal because it is, quote, "under investigation, it's an ongoing investigation."

In fact, Megyn, in a one-page letter, seven different times the Department of Justice said this is an ongoing investigation. So, if it's ongoing, how does the president know that there was no criminal conduct and who briefed him on it? If you can't come tell Congress the status of the investigation, why are you updating the president? All the more reasons for to us have a special prosecutor who is immune from any pressure that the White House might -- could put on him or her.

KELLY: I need a quick answer. Is there some potential problem in the boss projecting to those conducting the investigation that he knows exactly how it's going to come out?

GOWDY: I think that the president said with a lot of certainty -- he certainly acts as if this thing is dead. The Wall Street Journal has reported that it is dead. I can just tell you the people that I work for and the other states I travel to, this is a big deal when government targets you based on your political beliefs.

But to say there's not a smidgen of corruption when the investigation is ongoing. I don't know any common law professor that would have said that unless he had information you and I don't have.

KELLY: He fired the head of the IRS. There's a criminal probe open and Lois Lerner took the fifth. So, you know, I guess that was all a waste of time. Trey Gowdy, good to see you.