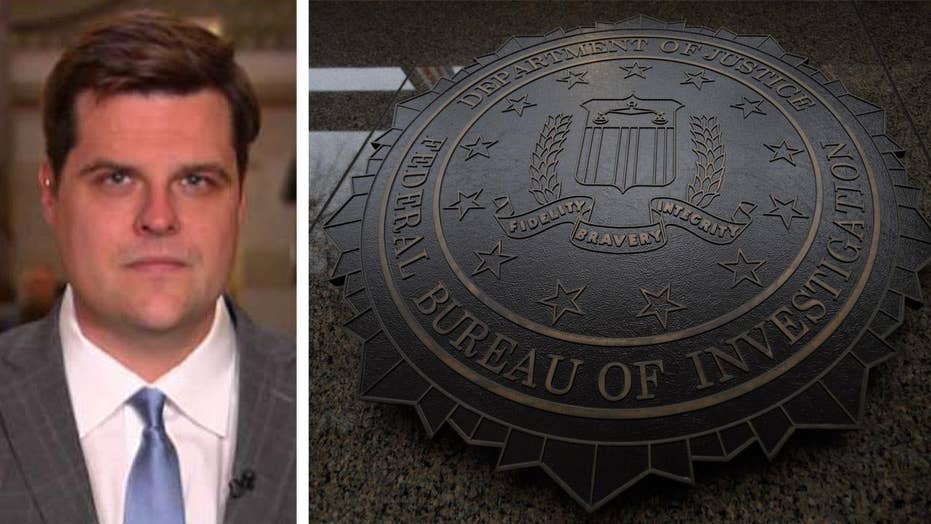 Rep. Gaetz: There is glaring hypocrisy unfolding with DOJ

This is a rush transcript from "Your World," April 16, 2018. This copy may not be in its final form and may be updated.

NEIL CAVUTO, HOST: Florida Republican Congressman Matt Gaetz is with us. He's a member of the House Judiciary Committee.

Congressman, fast-moving developments here. What do they tell you?

REP. MATT GAETZ, R—FLORIDA: They tell me that there's a glaring hypocrisy that is unfolding. And we have got the Department of Justice participating in it.

And many of Secretary Clinton's and key aides even got immunity deals. Here, when the shoe is on the other foot, you have got President Trump's personal lawyer having to ask for the very FBI that is investigating the president to not be the entity that is curating those records.

And so we're just in search of an equal standard that can be applied and then defended not based on politics or who is in the crosshairs.

CAVUTO: As far as I understand, congressman, the idea behind today's hearing was to try to quell all the other information that might get out there or risk getting out there, beyond the scope of the Mueller investigation or what prosecutors were looking for.

Now it's gotten to include other clients Michael Cohen had, God knows what else that can be revealed down the road. This does seem to have gone afield from what it was intended to be.

GAETZ: Well, it certainly has.

And the fact that Mr. Mueller referred to this to the Southern District of New York shows that it has no nexus to foreign interference in the election. It's just stuff that may end up being embarrassed for the president or his lawyer. So this isn't an attempt to find facts.

CAVUTO: Well, forget about embarrassing, though.

Is this even more problematic, that the president has been so focused on Bob Mueller and what he's getting or not getting, that this sideshow or this other avenue of attack from business relationships and what have you, we don`t know, as Judge Kimba Wood, is trying to discern, is an even bigger potential deal?

GAETZ: It very well could be.

And I will tell you this, Neil. When I have spoken to the president, it wears on him that, as he's trying to do work around the world to promote freedom and inclusion and democracy, that here at home we have these tactics that look more like the Second World and the Third World than like a justice system in the United States of America.

And that does wear on the president. It frustrates him. And it's one of the reasons we see that frustration manifest in his social media.

CAVUTO: All right, thank you very, very much, congressman, with all this breaking news.

We will try to stay on top of it, all sides. But it is getting curiouser and curiouser.