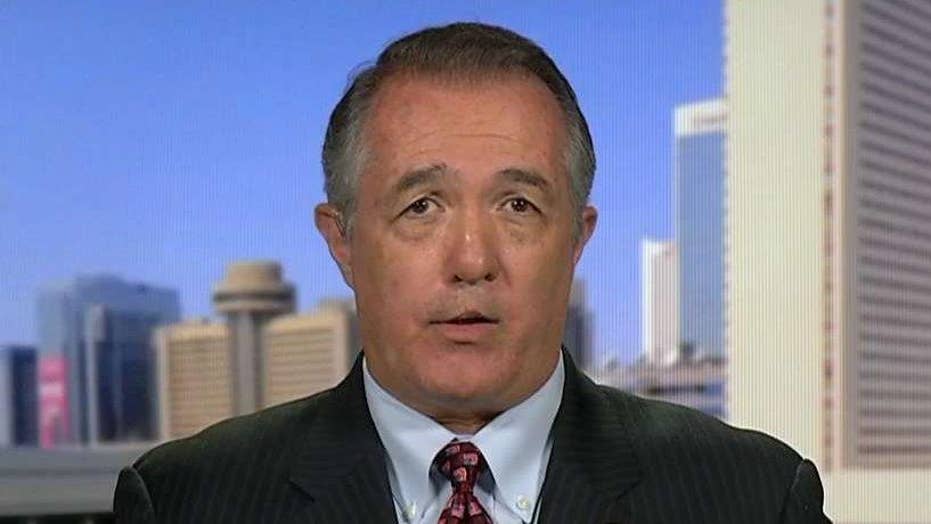 SUSAN RICE, FORMER U.S. NATIONAL SECURITY ADVISER: The North Korean regime has been able to succeed in progressing with its program, both nuclear and missile.

That's a very unfortunate outcome. You can call it a failure. I accept that characterization of the efforts of the United States over the last two decades.

Good to have you here.

REP. TRENT FRANKS, R-ARIZONA: Thank you for inviting me.

REGAN: What is your reaction to that? She's admitting, effectively, that the last administration and, frankly, administrations before it all failed, because here we are now.

FRANKS: Well, I don't think she had in choice but to admit that.

What probably should be even more clarified is that the capability of North Korea now to target U.S. citizens with nuclear warheads was facilitated at least by the deals that Bill Clinton and Barack Obama made with the North Koreans.

And yet I hear a lot of my friends on the left attacking President Trump, almost more than they do the North Korean leaders. And the reality is that President Trump is doing something that is very important right now. And that is making it absolutely clear to the North Koreans that it's in their best interests not to attack United States citizens or any United States territory.

And the reason that is so important, Trish, is because our war fighters have to game this out. And now that North Korea has become this -- has this capability of nuclear weapons, and they have this rhetoric that they have had -- we don't know whether it's rhetoric or what it is -- they have to game this out and assume that it will escalate into some type of nuclear attack by North Korea if a war of some kind starts.

That means we will have to move quickly to -- to neutralize that.

REGAN: Let me jump in.

Do you think there are some fundamental differences in terms of Susan Rice and how she thinks about this and how the previous administration thought about North Korea, in that she just had a New York Times op-ed the other day in which she effectively said, yes, we can live with a nuclear North Korea. We can, mutually assured destruction, much as we did with the Soviets, to which I would say, and I think most would say, no, we can't and why shouldn't have to.

But, nonetheless, Congressman, here we are now. So, do you think many of those members of the left that are taking aim at the president right now for a variety of political reasons also have a fundamental difference in terms of how they view North Korea?

FRANKS: I think they do. I don't think they realize how dangerous this situation is.

North Korea has gone -- and I have been on the Strategic Nuclear Forces Committee for 15 years. And their progress over those years has been really frightening.

But, recently, under Bill -- I'm sorry -- under Barack Obama, they tested nuclear warheads four times, and they tested missiles 11 times. So their capability has dramatically progressed.

And I will say to you that for them to be attacking this president is absolutely astonishing to me. This president is doing what is necessary to make sure -- when he says locked and loaded, I can suggest to you that that's a pretty accurate description of our status at this point.

FRANKS: But I think it's very important, very important that we realize that the North Korean economy is about $13 billion to $14 billion.

FRANKS: And that's an asymmetry that we need to use very significantly in this moment.

Well, look, I have heard a variety of different estimates, everywhere from $13 billion to $28 billion. It's hard to really know. But when you think of the $1 billion worth of sanctions, I don't think that's enough. I think we can do a whole lot more. I think China can do a whole to more, both in terms of enforcing those sanctions and in terms of offering a whole lot more up.

REGAN: Congressman, what do you say to the members of the left and, frankly, some members of the right, especially those that do not like this president in the conservative party, that feel that he's upping the ante, so to speak? In other words, he's giving voice to those in North Korea who want to believe that America is out to destroy them in some way?

How do you respond to those accusations?

FRANKS: Well, very simply, this strategic weakness and the kinds of things that have happened heretofore have brought us to the moment that we're in.

And President Trump understands that, and he's making it very clear to North Korea that it's not in their best interests to attack us. And I don't know of any more important single thing that he can do, other than as, I have said, to immediately pursue an overwhelming sections effort to isolate North Korea and see that regime fall, and make sure this type that any deals that we make require the dismantlement of their capability, rather than paying that ransom and not securing the hostage.

All right, well, thank you very much for joining us today, Congressman.