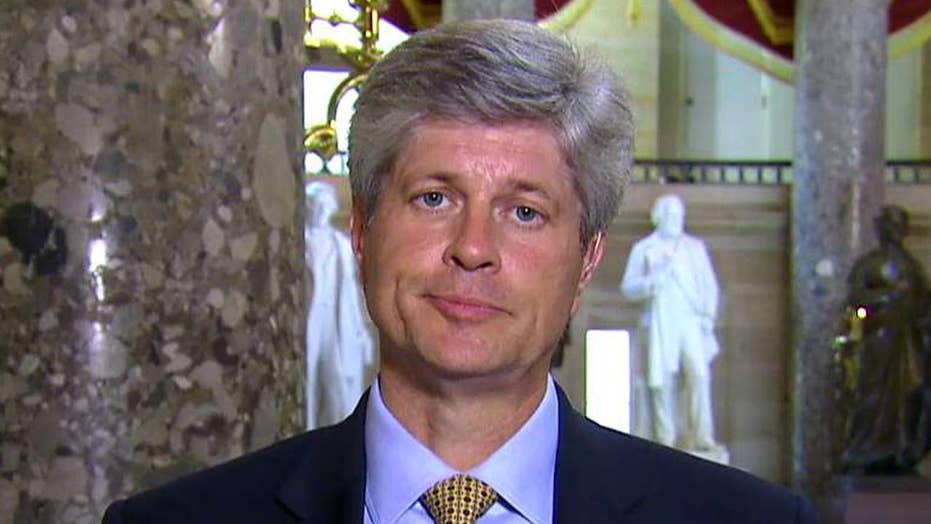 This is a rush transcript from "Your World," May 16, 2017. This copy may not be in its final form and may be updated.

NEIL CAVUTO, HOST: Plenty of Republican lawmakers have been getting an earful at these town halls. That, you hear about that. In fact, we have these guys on almost every day, it seems. These incidents are increasing

But our next guest says he was targeted at this home. This sign with profane messages was left on his front lawn for his kids to see, Nebraska GOP Congressman Jeff Fortenberry.

Congressman, very good to have you, I'm sorry under these circumstances.

CAVUTO: When did you discover the sign and all this other stuff?

Imagine this, though. My 11-year-old walks out one morning last week and sees a sign that attacks her father, is laced with vulgarity, and violates the norms of decency. It frightened her. She went back in and told her older sisters.

And we have had the conversations...

CAVUTO: By the way, sir, did this occur at your Washington home or your Nebraska home?

FORTENBERRY: It occurred in Nebraska, which is very unique.

FORTENBERRY: Because we usually don't have this kind of problem. We have vibrant political discourse. And, believe me, it's accelerated and is very volatile and robust right now.

But attack me. Protest against me. But do not frighten my children at their home.

And what I would hope -- thank you for having me on -- is to engender a bigger, broader discussion about the proper nature of political discourse, if we're going to be a true civil society that actually upholds the values of liberty and free speech, which means respect for differences and trying work that out through the ballot box, if necessary, but also through rational conversation.

When you take to it the next level, you have crossed over by frightening kids and disturbing the set of community values that I'm used to and many other people are used to in Nebraska.

CAVUTO: Were you in Washington at the time, sir?

And my wife happened to be out of town as well. This is what made this very difficult. So, when you get a phone call at 8:00 in the morning from my older daughter who was taking care of the children, you know something is really wrong.

So we worked through it. I think, again, they were scared. They were shocked. And this is very different, because it's not happened before in Nebraska, and this kind of attack against me at my home just, again, crosses into territory that I think is not healthy, not only for our state, but it's showing a deep social, cultural divide and fissures in our country, and, unfortunately, politics is a proxy for all of that.

FORTENBERRY: I have not.

Again, I have had minor vandalism. Of course we get political signs being yanked out of my yard, but I attribute that to kids on Saturday night who are riding by and walking by. You tolerate that. That's normal.

But when somebody deliberately goes to your home, knowing that it could disturb not only your own children, but other people around as well -- and, by the way, I have gotten a large outpouring of support, even from people who have said, Congressman, I 100 percent disagree with you, but this crosses the line. It's inappropriate for our community.

That's very helpful. We did get a lot of pushback, a lot of it from across the nation, saying, oh, you have got to expect this.

CAVUTO: Well, do they know, do authorities at least back in your hometown, sir, know who might have been behind this? Or did they catch anyone, security cams nearby, anything?

FORTENBERRY: Yes, no one has been caught. They do know about this.

Again, the police were very generous in their response, because they don't want to see this either. It's not the character of the place in which I live, where there's a deep sense of neighborliness and attentiveness to community values.

I did learn over the weekend that a sign, not with vulgarity, but a sign targeted to me, had been placed on the doors of my church. One of the nice ladies who goes there early saw it and just took it down before anybody else did. I just learned about that myself.

FORTENBERRY: But, nonetheless, again, we have got to get beyond this.

We need rational discourse, vibrant debate, an attempt to have a reasoned conversation, and, if necessary, work it out at the ballot, where you can vote for differences of perspective.

CAVUTO: No, you're right.

FORTENBERRY: But targeting a neighborhood, targeting of children is just not right.

CAVUTO: Yes, you're right about that.

And I think that he speaks for clearly that the tone that is in Washington and politics now. You might not like the politics and the mood and all of that, but there are more adult ways to handle it. And that is not one.