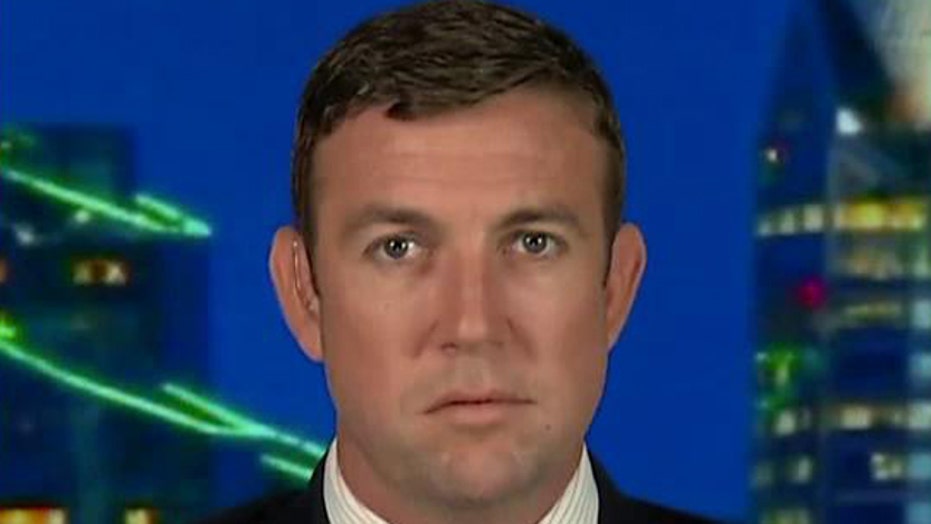 Rep. Duncan Hunter on how ISIS poses grave danger to US

This is a rush transcript from "The Kelly File," August 26, 2014. This copy may not be in its final form and may be updated.

MEGYN KELLY, HOST: Breaking tonight, Fox News confirms that an American has been killed in Syria, and that that American was fighting with the terror group ISIS. His name was Douglas McAuthur McCain. You cannot make this up. And he described himself as a slave of Allah. The FBI is tracking dozens of cases involving Americans who have been traveling from the United States to Syria, but the system does not catch everyone.

And so, this guy we're told grew up in Minnesota. He played basketball, according to a friend, joked a lot, had a sense of humor, got along with most, never seemed interested in a religion, wound up moving to San Diego, started attending a mosque, and then his social media profile suggested before you knew it, quote, "It's Islam over everything." And he winds up joining ISIS. How many of these guys are there?

REP. DUNCAN HUNTER, R-CALIF., IRAQ AND AFGHANISTAN COMBAT VETERAN: As I would say, last century you had a lot of especially liberal elitists joining the Communist party. They went to Europe. Ernest Hemingway wrote about it from -- in -- "With Whom the Bell Tolls." This happens. But instead of joining the communist party now, you have disaffected youth joining radical Islam.

So, I think you're going to see this as long as our -- as long as our Homeland Security Agency, the FBI, the CIA keep tabs on these guys and the women, and for God sake, if we could secure the border once and for all.

KELLY: I want to get to that.

HUNTER: Ands top visas to this area. We shouldn't have -- we shouldn't have had any more visas for folks from the Middle East, from this area coming over right now, we should say stop, time out, let's take a look at this, slow things down so we can make sure we aren't allowing people into this country that will then harm us.

GEN. MARTIN DEMPSEY, CHAIRMAN, JOINT CHIEFS OF STAFF: The immediacy is in the number of Europeans and other nationalities who have come to the region, to become part of that ideology, and those folks can go home at some point...

Because of open borders and immigration issues, it's an immediate threat.

KELLY: They are saying, it could be in the thousands, to may be 2 to 3,000 people holding Western passports, not just America, but our friends in Europe who can come right in to the United States with ease. And if you have an American passport, of course, can do so as well.

HUNTER: Once again, remember 9/11. Those -- every single 9/11 hijacker had a visa, they'd overstayed it. Number two, ISIS in Iraq and Syria is not an existential threat to us, they're not going to harm the United States. They're bad guys, yes, if you're there. But a bunch of guys wearing pajamas pushing up logs, they are not an existential threat to us like North Korea is, like Iran is, like Pakistan is. They are not like that. The only threat that lies with them is that they can get people back into the United States to do harm to us here and commit acts of terror.

That's why it's more important than ever that you secure the southern border, one, and started denying visas in totality to people from the Middle East, from this area. Unless they are, for instance, persecuted Christians and we allow them in. But we have got to just say time out, stop, hold the game, and we have to make sure that our allies, the British, French, Germans, make sure the people that we allow to travel back and forth from and to the U.S., make sure that they're doing a better job, too, of screening the people that they have to screen so that they don't unwittingly allow bad guys to come over here from their country.

KELLY: We are talking about some big numbers. And just quickly before we go, put the pictures on the board of the two who were arrested, two Americans who were trying to go over there to fight for ISIS. The congressman mentions a woman, stand by because we've got her picture as well. It's not just men. The threat is wide and it doesn't always look like you think it's going to look.

Congressman Duncan Hunter, thank you for being here.