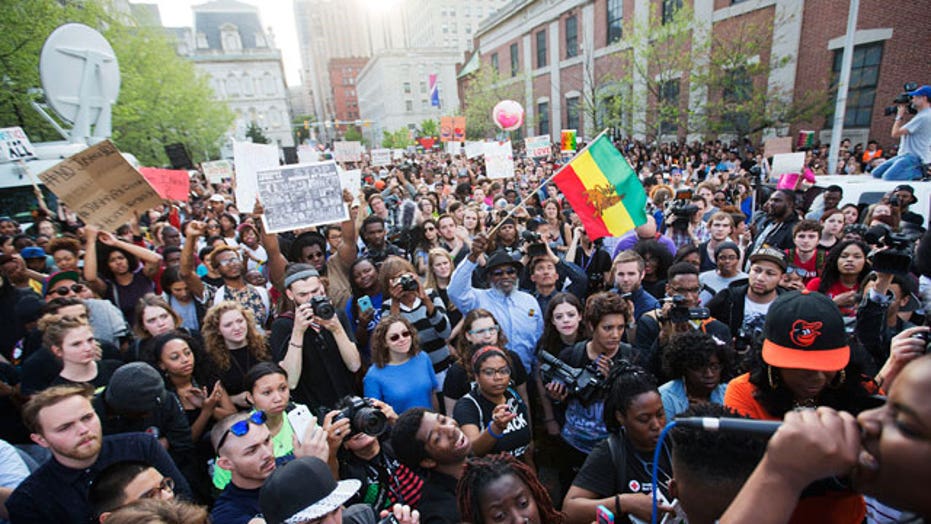 Protests in support of Baltimore spread across the nation

Calls for calm in the embattled city on 'Hannity'

This is a rush transcript from "Hannity," April 29, 2015. This copy may not be in its final form and may be updated.

SEAN HANNITY, HOST: And this is a Fox News Alert, explosive new details tonight in the arrest of Freddie Gray.  The Washington Post is reporting that Freddie Gray was, quote, "banging against the walls" of a police van after being arrested, in an attempt to intentionally hurt himself, now, this as massive protests erupt in major cities all across the country, including Baltimore, New York City and Washington, D.C. Now, we'll have coverage of all these cities in tonight's program.

Now, in Baltimore, the city tonight again on edge as the 10:00 PM curfew is now taking effect. Thousands of Army National Guardsmen and police officers are in that city, demanding that protesters now clear the streets. Now, Baltimore police have already arrested 18 people so far tonight.

On the ground live in Baltimore with the very latest is our own Leland Vittert -- Leland.

VITTERT: Just now, the Washington Post, 25 minutes ago, came out with this story about the fact that Freddie Gray was allegedly banging his own head inside of this police prisoner van.

CUMMINGS: Well, there's an investigation going on. As a matter of fact, there are four investigations going on and...

CUMMINGS: We will find the truth.

UNIDENTIFIED FEMALE: We will find the truth.

CUMMINGS: All right? We will find the truth.

VITTERT: You think you're going to get it from DOJ or from Baltimore police?

UNIDENTIFIED FEMALE: (INAUDIBLE) a federal investigation going on, as well.

UNIDENTIFIED FEMALE: And we'll wait for the investigation to take place. We're committed to making sure that there is justice. And it's not about what happened in terms of his banging his head. It's what happened inside of that van. We will wait.

UNIDENTIFIED FEMALE: We will wait.

CUMMINGS: And we're going to get...

UNIDENTIFIED FEMALE: And nobody (INAUDIBLE) We don't -- we won't prejudge. We know that in Baltimore that the majority of the police do their jobs, but there are some folks in our city, and as we...

HANNITY: Leland, I have a question.

UNIDENTIFIED FEMALE: ... (INAUDIBLE) the numbers. Too many people have died in the custody of police...

HANNITY: Ask the congressman this...

CUMMINGS: You can take over. I got to get (INAUDIBLE)

HANNITY: Oh, he's not going to have a question from me. All right, well, that's fine.

HANNITY: Yes, I want to -- I want to know, did the president rush to judgment, like he did in the Michael Brown case, by sending White House representatives there?

VITTERT: Congressman, do you think the president rushed to judgment in this case?

VITTERT: You needed the president's help?

CUMMINGS: I'm just going to say this, and then I'm going to be finished. Yesterday, our congressional delegation met by phone with the U.S. attorney -- the attorney general. She assured us that this is a top priority. I believe in her. And -- and I do believe...

HANNITY: The president lashed out...

CUMMINGS: ... with an investigation that will look at all the facts.  And...

CUMMINGS: ... that I will not rest until we get this resolved.

VITTERT: And you think the president's been helpful in this?

VITTERT: Do you think the president rushed to judgment?

VITTERT: Do you think the president did the right thing?

CUMMINGS: I want you to help me to get these people to go home. Let's go home!

VITTERT: Obviously, Sean, the congressman didn't have much interest in answering your question. We're going to keep going with him as he has his microphone...

VITTERT: Congressman, we're just trying to get answers to a question!

VITTERT: Do you think there's too much police out here?

UNIDENTIFIED FEMALE: Do you think you're making a difference here?

VITTERT: Do you think you're making a difference?

VITTERT: You're seeing Congressman Elijah Cummings walking around with a bullhorn, yelling at everyone to go home. On the other hand, there's about as many media out here as there are people...

VITTERT: You have more media than what, sir?

CUMMINGS: Yes, I'm not upset with the media. I'm just saying it looks good. I want you all to understand that most of us are media. This is media here. The people have gone home!

VITTERT: So you feel, sir, that... and there's also a lot of police out here, as well.

VITTERT: Do you think there's...

CUMMINGS: I hope not.

HANNITY: ... told police to stand down.

VITTERT: Do you think the police response now is better than it was on Monday, when the mayor said stand down?

CUMMINGS: Right, we have to go home, thank you.

CUMMINGS: Now, this is our city, and we're trying to get people to go home. That's right.

CUMMINGS: Number one priority is getting people to go home.

UNIDENTIFIED MALE: Do you feel like you've done a good job? It seems very different than last night.

CUMMINGS: You're taking pictures of each other.

VITTERT: Sean, you got any more questions?

HANNITY: No, that's it. We really appreciate it. Thanks. Leland Vittert is on the ground in -- in -- in Baltimore tonight trying to get answers from Congressman Elijah Cummings from the area.

Joining us now on the ground with much more in Baltimore is -- Geraldo Rivera is with us. Geraldo, what's going on with you?

GERALDO RIVERA, FOX NEWS CORRESPONDENT: Hey, Sean. You know, there are not many police in the middle of all of that tumult, but they are by all means ready and standing by. They have mustard here with their riot shields. They've been very patient. It was a very tumultuous hour leading up to your program, Sean. We fed you some video. It was very distressful (ph). We thought that it was going to really break into something really violent.

But I must say that Elijah Cummings, who is not particularly friendly to the media, is doing yeoman's service here, the legendary Civil Rights activist who represents, of course, this district of Maryland here, with the senate majority leader, Pugh.

But the officers are standing by. They are ready. You know, do you want to -- Commander, do you want to say anything to the folks about how you are ready and you hope that this all calms down?

But you know, the fact of the matter, Sean, is that it has been enormously effective, this move to get people home. I don't know where they went. The helicopter is giving the message. But you know what, Sean?  What is interesting is this crowd knows nothing about the explosive reports that you have been broadcasting from The Washington Post about the fact that Freddie Gray may have self-inflicted some of the deadly injuries on himself.

When they hear that -- plus, remember that the autopsy report that was initially promised to be released on Friday will now not be released publicly. So you have two things happening. You have one is the fact that the suggestion is from The Washington Post report that this man inflicted some of these awful injuries on himself. That is way explosive enough. It will deflate this crowd.

At the same time, it really enrages the people of this community.  They'll say, Oh, my God, another coverup. And the second thing is they want the autopsy that was promised, and now, Sean, will not be released.

Now, in the last hour, there was all kinds of pushing and shoving and name-calling and anger and Bloods and Crips and other street gangs and other organizations here, everyone claiming turf, everyone saying, You go home, you go home. It is a situation that I believe will escalate as this week progresses.

They've done an excellent job, an excellent job in terms of clearing this vital intersection. The police, as I said, Sean, are ready, willing and able. But the helicopters are circling overhead. If last night is any indication, I think tonight will be better than last night.

I don't know where those young people dispersed to. I am hoping they did go home. But I'm telling you, Sean, when they hear those two points, that double whammy -- self-inflicted injuries, no public autopsy released on Friday -- I believe that it's fair to say that there'll be hell to pay in Baltimore, Sean.

HANNITY: All right, it's going to be fascinating to watch.

Also, Geraldo, my sources on the ground, law enforcement sources, confirm to me -- multiple sources, high-ranking members inside the police department told me that they were, in fact, told to stand down, which means -- and the mayor herself made that decision. And we'll get into that as the night unfolds.

Geraldo, we'll be back to you throughout the evening.

We check in now with Mike Tobin. He's live on the ground. He's in Baltimore for us tonight, as well -- Mike.

MIKE TOBIN, FOX CORRESPONDENT: Well, Sean, gone now is the effort for a low police profile. You look over my shoulder, here's one of the columns of police with the riot gear. It's lighter riot gear than the other night, mostly just the shield and the helmet, light gear there.

As you look across the street, you've got another two columns of police in riot gear. And they really appeared in an instant, confirming what we suspected all along, that they were just at a staging area somewhere nearby.

And what prompted them to come out -- we got into this a little bit, but there was a group of people out here who took it upon themselves to do a community policing effort, if you will. They formed a line on the street, and they intended to go across the street and sweep it for young people and tell all the young people to go home.

Now, we're past 10:00 o'clock. We haven't really seen any kind of conflict. The numbers that you see of people out here in the street are kind of confused because you've got so many reporters.

I can tell you right now, what I'm smelling is vinegar. And I've have smelled that at a lot of demonstrations before because you get people who think that that will somehow negate the effects of the tear gas, and they'll put that on a bandanna and hold that up to their face.

So I smell that. It looks like -- so that would be an indication that some people are going to -- are spoiling for a little bit of trouble. But you've got the police helicopter overhead, fewer numbers of people here, a lot of reporters hanging around. The low profile of the police is gone as they're out here with the truncheons and shields at the ready -- Sean.

HANNITY: All right, Mike Tobin, we'll get back to you throughout the evening.