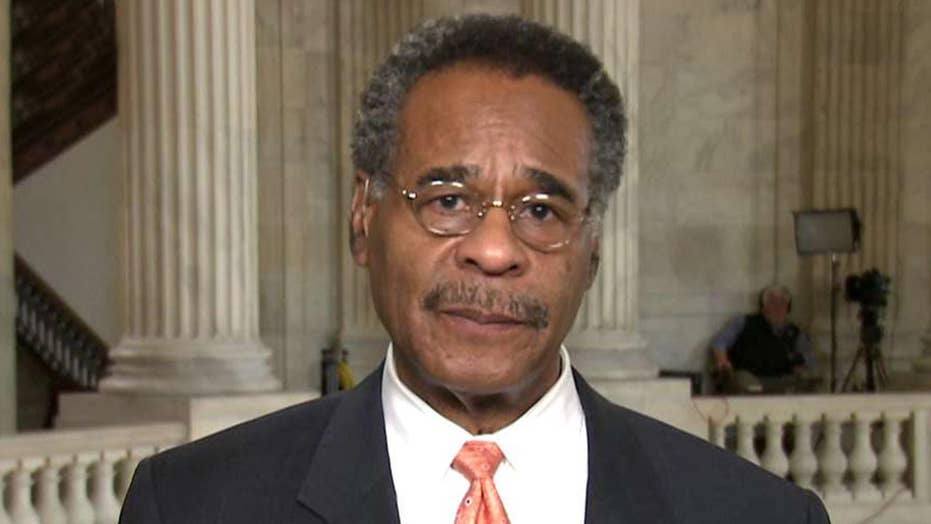 Rep. Cleaver: Congress should have a say on Syria response

As Trump threatens a strike in Syria, Rep. Emmanuel Cleaver says that the War Powers Act should be re-examined and speaks out against 'undeclared wars.'

This is a rush transcript from "Your World," April 12, 2018. This copy may not be in its final form and may be updated.

NEIL CAVUTO, HOST: All right, the meeting is over, but so far, far from done when it comes to addressing what to do about Syria.

This just coming in from Press Secretary Sarah Sanders on that powwow with top defense officials meeting with the president. "Trump just finished a meeting with his national security team to discuss the situation in Syria. No final decision has been made. We're continuing to assess intelligence and are engaged in conversations with our partners and allies. The president will speak with President Macron of France and Prime Minister Theresa May of England this evening."

All right, so, close to something, but what?

Let's get the read from Missouri Democratic Congressman Emanuel Cleaver.

Congressman, always good to have you. Thank you for taking the time.

REP. EMANUEL CLEAVER, D-MISSOURI: Sure. It's good to be here with you.

CAVUTO: How do you feel, sir, about if we take action in response to apparent chemical weapons used on the part of the Assad regime against its own people last week?

CLEAVER: Let me preface my answer to you by saying that I think something has to be done military, hopefully with some diplomacy as well.

But, look, I opposed President Obama when he sought to do something very similar. My position is that our Congress is systematically handing off its constitutional responsibility to the president.

All of these undeclared wars have killed tens of thousands of Americans and hundreds of thousands of other people. And so while I think we have got to respond some kind of way, look, Congress ought to have a say in what happens.

And we ought to ask questions. What is the plan? How long are we going to fly strikes? Are we going to have a no-fly zone? Whatever, we need to know that, because the Constitution gives us the power to declare war.

And we haven't done it. The War Powers Act needs to be reexamined.

CAVUTO: Now, I remember very well your opposition to what President Obama was considering at the time. Some argued him that compelled him to say, all right, I'm going to throw this back in Congress' lap after his famous red line comment.

Do you think, as critics have said since, that that limits a presidents' ability or a country's ability to respond immediately to a problem that has to be addressed immediately, that if we had to wait for you guys to come to a vote, make a decision, for all we know, Assad could be gassing his people again and again and again, and we do nothing.

CLEAVER: No, I think there are instances where the president must act immediately after conferring with the Army chiefs, the national security adviser, and so forth.

CAVUTO: Well, Director Pompeo, in his confirmation hearing, today seemed -- and I don't want to mistake his words, sir -- seemed to intimate this is an example of that, a one-time response, talking to top military leaders and allies, and that he would be justified for an immediate response that was much more involved, obviously involving Congress.

CLEAVER: Well, I think that, in a case like this, because we have waited now, what, almost a week since we discovered that Assad was using chemicals on his own people, perhaps with the help of Vladimir Putin, I think we could have had a meeting, even if the -- someone from the administration would come over.

We could have a closed session and talk things out, and just so we would feel like we are involved, and get information about whether this is in fact going to be a one-time-only hit.

Look, I don't care who is president is, if it's my cousin. If they are trying to exclude Congress from something as critical as war or using the machinery of war, we need to know something about it.

CAVUTO: So, when the president talks, as he has, sir, lately about his tweet being misinterpreted about taking action or telegraphing his next move, that the attack could be soon or not so soon at all, that it might not be as we expect, what did you think of that?

I'm hoping that we don't end up having some confusion on the other end, where we have an accidental war. I think we have essentially warned Russia. Russian troops are in the area. They may call themselves advisers or whatever, but they're -- Russian troops are there in Syria.

What happens if we kill 200 or 300 Russian soldiers? I think we have got to be very strategic. And I think the president has got to rely heavily on the military and on the civilian leadership, with the secretary of state -- well, without a secretary of state, but individuals who are in those positions.

Look, what Assad did, we need to respond. I would throw a rock over there if I could, but we need to -- there ought to be a plan. And I don't think that we can do anything external to diplomacy.

CAVUTO: Congressman, thank you. You have been very consistent on this, with a Democratic president, a Republican president. No one can fault you on that front.

CLEAVER: Sure. Good to talk with you.