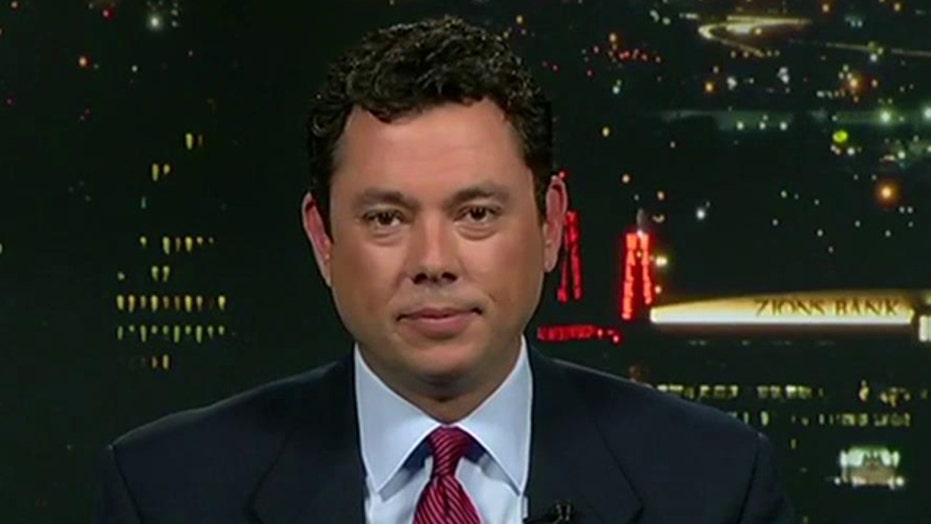 This is a rush transcript from "Hannity," October 9, 2014. This copy may not be in its final form and may be updated.

HANNITY: Now, that's not all. The Washington Post is also reporting that the lead investigator in this scandal felt pressured by the acting DHS inspector general, Charles K. Edwards, to cover up this mess. Now, the investigator allegedly told Senate staffers, quote, "We were directed at the time to delay the report of the investigation until after the 2012 election."

Pretty unbelievable. But should anybody be surprised?

My next guest is urging the White House to come clean about the scandal. Utah Congressman Jason Chaffetz is with us.

Well, first of all, it sounds like there's a lot of cover-up going on -- Benghazi, spontaneous demonstration, YouTube video -- all of this is to help a president get elected. So at the heart of this, there's a big cover-up to help an election and influence an election. Is that not the motive?

CHAFFETZ: Well, again, that's not coming from some, you know, Republican congressman from Utah. This is coming from whistleblowers, people whose job it is to go in and find this. We have it from multiple people. You have it from the inspector general's office. The Washington Post didn't put this, you know, front page above the fold because this is an old story, as the White House wants you to believe. There are very credible sources, multiple sources who are making these allegations.  They're serious, and we're going to get to the bottom of it. But this is -- we've seen this movie before, unfortunately!

HANNITY: We've seen the movie before. And I'm going to get to that in just a second here.

But I want to go through this, because I think this is very important. We were directed at the time to delay the report of the investigation until after 2012 and the election. David Nieland, the lead investigator on this Colombia case for the DHS inspector general's office, told Senate staffers -- and I know you're aware of this, as well. And he also added that a superior said to withhold and alter certain information in the report of the investigation because it would be embarrassing to the administration. So not only withhold it but alter it. And then these guys were punished.

CHAFFETZ: And there's three of them. I find it more than a coincidence that you have the inspector general's office, which is -- really has the authority to go into the agency, look under the hood, talk to anybody they want to. Three people -- three! -- were put on suspension there simultaneous -- pretty much simultaneous to them criticizing the White House and questioning, "Why are we putting this information in there?  We have hotel records. We have details. We have talked to people. We have been on the scene. Why wasn't that information in there?"

And then to hear Jay Carney and the White House say there was no credible information -- there was no information -- Sean, that's just absolutely not true! And again, why I think The Washington Post puts it on page one above the fold, there's a lot of smoke here, and we're going to get to the bottom of it!

CHAFFETZ: Oh, it's a huge issue! Mr. Edwards, who was the inspector general who supposedly, you know, allegedly made -- allowed this to happen, he is still on paid administrative leave there in the Department of Homeland Security. But you had these three people put on administrative leave. You also have...

HANNITY: You believe that was retribution...

CHAFFETZ: ... within the Secret Service...

HANNITY: In other words, they didn't...

CHAFFETZ: Well, there was...

HANNITY: They didn't want to alter the report. They questioned why the report was changed. Now, I know at the time that they were told this is the normal editing process. Is taking out the facts of the case, the conclusion of the investigation -- is that editing?

CHAFFETZ: Well, there was an independent group that came in and looked at this, and there was a determination specific to one of the inspector general there that it was directly tied to retribution for the fact that they were trying to show the truth that there was a White House staff person, an aide there that was in Cartagena that was engaged in bringing a prostitute to his room! A foreign national in the room right before the president gets there is just not acceptable.

And what's -- what's infuriating, is you had 24 -- nearly 24 Secret Service and military personnel -- some were fired, some were reprimanded.  But what happened at the White House? Nothing! In fact, this person got a promotion! He now serves -- he now works in the State Department. You can't make this stuff up, Sean. He works in the Office of Global Women's Issues.

HANNITY: And his father's a big DNC donor.

CHAFFETZ: Yes, what a coincidence!

HANNITY: Yes. Any different than the...

HANNITY: Yes. So Fast and Furious, IRS, Benghazi, oh, the ISIS is not the JV team, I never said that, and by the way, you can keep your plan and keep your doctor and save money. We get lied to an awful lot here, doesn't it seem like that?

CHAFFETZ: It's just not right.

HANNITY: ... good to see you. Thank you very much.