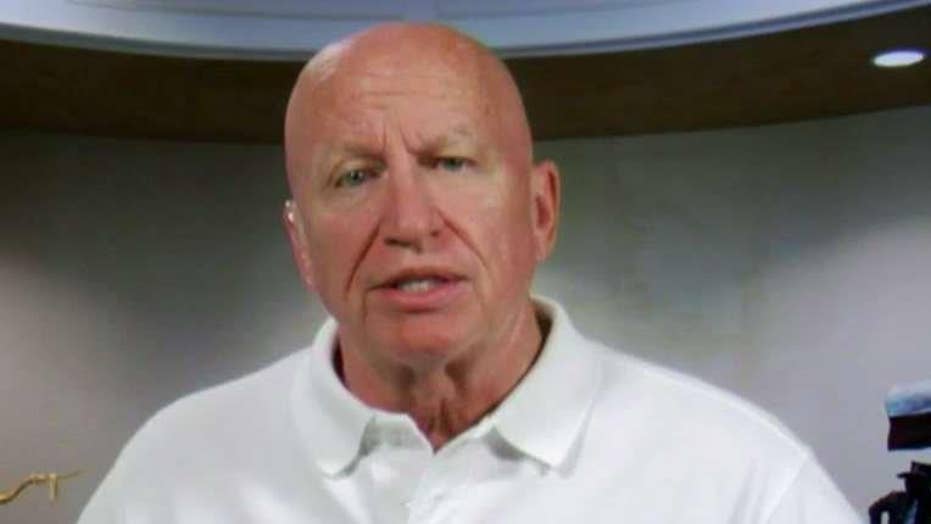 This is a rush transcript from "Your World," August 31, 2017. This copy may not be in its final form and may be updated.

NEIL CAVUTO, HOST: You were saying, just to be on the record that now is not the time to consider tax cuts, right?

LANGONE: Absolutely not. Get it done. Get these people the help they need.

If there's anything left over for tax cuts, then we get them, but first things first.

CAVUTO: All right, you saw that, heard that, Ken Langone telling me now is not the time for tax cuts amid the Harvey recovery.

I have got other guests who say now is exactly the time to provide some relief for those folks, at least in their net pay, maybe a little bit more net pay.

House Ways and Means Chairman and, by the way, Texas Congressman Kevin Brady is certainly in that camp.

Very good to have you, sir.

CAVUTO: What did you make of what he was saying?

BRADY: Well, first, I really appreciate he cares so much for our families and our communities. It says a lot about him.

And he's right. We have got to tackle this first. But after visiting with the president this week in Texas and again last night, I'm confident we can do both. And, in fact, I think it's even more important now, because we know, for our communities and our states to recover, a stronger economy and have local businesses and families keep more of what they earn, making sure our companies can compete, creating a simpler tax code, that is all hugely helpful as you're looking for ways to recover and rebuild.

And a lot of what is the genesis of those remarks is, we're going to need so much money to help out your fellow Texans, Congressman, that now is not the time to be even toying with tax cuts. You saw what?

BRADY: Well, look, first, we're going to put a package together to help these communities in Texas, Louisiana and others rebuild.

And I'm hopeful, in visiting with the White House yesterday, beginning the process with Governor Abbott and others in our local communities, one, I hope our package is helpful, not wasteful, that it's based on what our communities need, not what Washington needs.

I'm confident we can do that. And I think we can do that probably in two different steps, one, the more immediate one. This is the discussions we're having right now. But I will tell also you, just like the rest of the year, we have run a parallel track on tax reform.

We have worked through August, even though we have not been there. Our tax teams are working and our principals are talking. And we're meeting with the president Tuesday on this issue as soon as we get back.

And so, look, I still -- all this is a challenge, no question about it. But, again, we're still focused on delivering this, this year.

CAVUTO: Now, that meeting later on with the president next week, as you know, Chairman, is going to include Nancy Pelosi and Chuck Schumer, both of whom have said if there's one penny for the rich, the top 1 percent, dead on arrival. I'm paraphrasing.

BRADY: Yes, so here's what I know.

Eight out of 10 Americans believe tax reform will help them, their family and their local businesses. And many of them want their lawmaker to work across the aisle to get this done.

Now, I still think voters will reward the Kennedy-type Democrats who, as President Kennedy said, it's time to get America moving again. Boy, we need to get America moving again. I think our Democrat colleagues, especially the ones I have talked to in the House, have great ideas. I'm hopeful they will stay at the table. I'd love to see them be part of and supportive of this.

CAVUTO: But what they're talking specifically about, Congressman, is that idea that tax cuts are fine, but not for the rich. Do you think the final package will include for the rich?

BRADY: Well, thankfully, they weren't leading when President Kennedy was in office and he proposed lowering the rates for all Americans and all local businesses, or when Democrats worked with President Reagan to do exactly the same, which, by the way, jump-started almost 20 years of prosperity and 37 million new Main Street jobs.

So, this is what Main Street -- this is what it's all about. I still think Democrats across the country want their lawmakers to work with the president and others to get this done.

CAVUTO: All right, you mentioned eight out of 10 who want the parties to work together. But a similar eight out of 10, in a recent FOX poll don't think it is going to happen, sir.

They don't think that tax reform is going to happen at all this year. What do you say to them?

BRADY: Yes, you know, that's fair, because of the health care collapse in the Senate, which, look, there's no good way to spin that.

And I'm still hopeful they will cobble somebody together to send back to us in the House. So, but I also know that Americans believe, boy, this is time. It's been three decades. They're sick of this tax code.

I will tell you, I think all the dynamics are right for delivering it this year. And I do too think that having the president out there on the stump making the case in Missouri, across main streets across the country is incredibly helpful too.

CAVUTO: Did he make the case? I wasn't sure.

Now, I know he wanted to just champion tax cuts as a way to goose the communication, but he didn't really spell out any specifics. Is it because he wanted you guys to sort that out, or what?

BRADY: The answer is yes, because we're working as a team with the White House, the Senate and House tax writers on that bold, transformational plan.

We're making good progress. And we will keep you posted as the specific next steps take place.

BRADY: But I think the important thing is, we're focused on a unified plan and the urgency. The American people should know, we want to deliver it this year in a big, bold way.

CAVUTO: Congressman, I'd be remiss if I didn't bring up another guest on this show, Chris Christie, the New Jersey governor, who was bemoaning a number of Texas legislators who he said were being hypocritical, referring to Ted Cruz more specifically, on pulling back when it came to aid for Sandy, not so much when it came to aid for Texas.

Anyway, this is what he told me. And I want you to react to this.

GOV. CHRIS CHRISTIE, R-NEW JERSEY: There is going to be extraordinary damage here.

And, you know, in Sandy, it was in the tens of billions of dollars, and we need to make sure that we do that for the people of Texas. It shouldn't be held political hostage, like Sandy aid was, and, quite frankly, Neil, from a lot of people who represent Texas in the United States Congress.

BRADY: Well, while I think he has it wrong, the truth is, there's a time and a place for that discussion. But it isn't now, when we are in Beaumont evacuating people in critical condition, trying to find someplace other than their hospital to save their lives, while we're still trying to rescue people from roofs.

And you're seeing this all throughout out the region. Look, I think that's where our focus ought to be right now. It certainly is mine and certainly is President Trump's and the vice president's as well.

CAVUTO: But you worry that some will take advantage of this, I mean, the governor's comments notwithstanding sir, that they will add on a lot of other spending that has nothing to do with helping the fine folks in your wonderful state and say, if you reject that, you are rejecting the Texans, when in fact you are adding a lot of needless spending that could be problematic?

So, I think one of the lessons learned from Sandy and others, frankly, is, look, make these packages helpful, not wasteful. Make sure they're tailored to what the community needs, not what Washington or Congress needs.

I think we stay within those guardrails, we will be able to deliver first on the timely package that can help with the immediate needs relief, but then, longer term, as these waters recede, as we really get a clear picture of what the rebuilding and recovery will need as we move forward, I'm confident we can do this.

CAVUTO: There's not going to be a government shutdown now because of this, right?

BRADY: I don't believe there ever would be.

BRADY: And so, in listening to our members across the -- all across the spectrum, look, we're going to keep this government open.

BRADY: We're going to pay our debts on time. But we're going move forward on issues like tax reform.

CAVUTO: All right, Kevin Brady, I know you have got a lot on your mind, certainly with your fellow constituents and with taxes and everything else, so busy plate.

CAVUTO: More importantly, probably more near and dear to him now, a Texas congressman dealing with a world of hurt for his people.