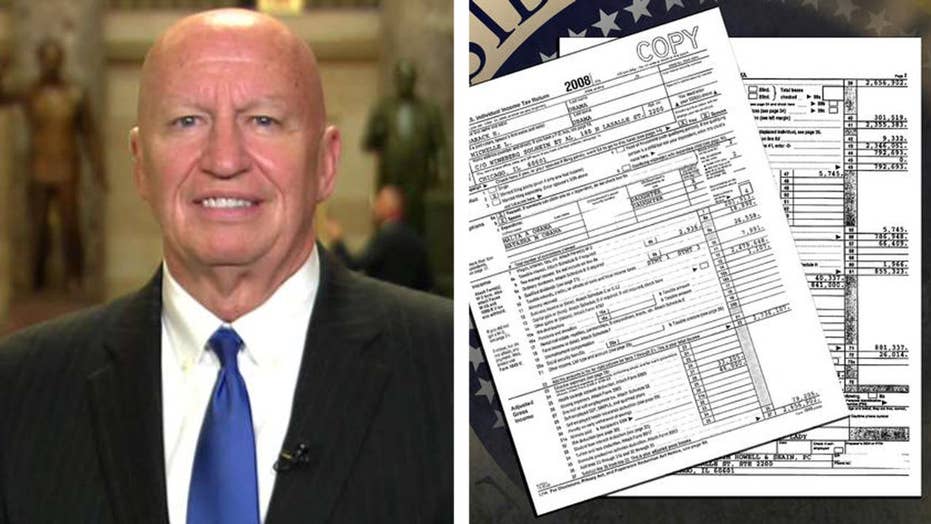 NEIL CAVUTO, "YOUR WORLD" HOST: Meanwhile, the guy in the middle of all of this getting an attaboy from no less than the president of the United States today, especially when he showed off something.

DONALD TRUMP, PRESIDENT OF THE UNITED STATES: Most Americans will be able to file taxes on a single sheet of paper. What do you think about that, Kevin? Are you still there? Or is it going to be a paper-and-a-half?

TRUMP: Great job. Thank you very much. I didn't know I was going to be given a prop.

REP. PAUL RYAN, R-WIS., SPEAKER OF THE HOUSE: That is my only copy.

And right from the White House in his first media interview since all of this went down, the aforementioned House Ways and Means chairman, Kevin Brady, who joins me right now.

Chairman, thank you very much.

BRADY: No, Neil, thanks for having me. I'm -- I'm thrilled to do the first interview with you.

You know, you did bring that little prop to White House. What was that showing, that you could, most Americans could fill out taxes on that, on an index card?

The most dramatic change probably is to how we make -- how fair and simple we make this tax code for families. So, nine out of 10 Americans will be able to file using the simple postcard-style system.

And we do that really by clearing out a lot of provisions for a few, so we can lower the rates on everybody. And I think that simplification, coupled with keeping more of what you earn, and, of course, because the job growth and paychecks increasing, look, this is a big win for families who have been there -- their paychecks have been stagnant for way too long.

CAVUTO: You know, Chairman, you probably heard what Lee Zeldin, a Republican from New York, not a fan from this right now. Obviously, he's wincing a little bit at the fact that state and local taxes cannot be written off here.

And that's a problem for high-tax states like New York. Do you worry about others who might bleed off their support?

BRADY: Well, one, Congressman Zeldin has been terrific to work with. He just wants to make sure his constituents are better off after tax reform than before.

And what we know is, because we lower the rates and we double the standard deduction, we have a new family tax credit that help Congressman Zeldin's families up to $230,000 of income get the credit they have never gotten before.

So we know that we can drive tax relief to many of Congressman Zeldin's constituents, as we are, because, Neil, here's the deal. We want people to keep more of where they earn -- of what they earn -- excuse me -- regardless of where they live.

And with this new tax reform, we do. So we're going to keep working with him and others. Let's see if we can't get this right for them.

I do notice as well, as we're sort of going through these rates and the brackets and where they kick in, et cetera, one thing that stands out is that the very rich, Congressman, are growing to still be paying at the very high rate, the existing rate of 39.6 percent.

Some of them feel that since they pay most of the taxes, that is, the very rich, they're not getting bubkes from this. What do you tell them?

BRADY: I think wait until they see everything that's been done underneath that rate.

Sort of unlike the Reagan reforms, which were just rates were it, that was key, we do so much more under those rates. For example, you know, you know how the tax code works. It's sort of like an elevator. And each floor in your income, you have another tax cut.

So, those who are at the 39.6 already enjoying a tax relief. Plus, we eliminate the AMT and a number of those provisions that have been damaging.

But here's the real key. When look at how this is analyzed, you will see that there's tax relief at every level, because many of these families invest in their small business. They're involved in their corporations.
We're cutting rates across the economic spectrum. So, you're going to see, I think, not just tax relief, but growth across the board.

CAVUTO: Chairman, I know this was a frantic dash to get this out and to get the report out there as well.

But are you surprised that Democrats, again, with all the allowances you made to make sure that the rich still pay at the 39.6 percent rate, some of these other provisions that took some of their benefits away, that the estate tax didn't immediately go away, that it is going to be around for a few more years, that they still call this sort of a boon to the rich?

CAVUTO: Were you surprised at that?

BRADY: No, in the sense they have been saying it so long, I'm not sure they can say anything else.

And the truth is, I think The Washington Post or one of the media called that claim, gave it four Pinocchios. It just isn't true, when you look at this tax reform.

What I'm hopeful is that they -- look, there are moderate Democrats, centrist Democrats who, given time, I think will not defend the status quo. They're seeing the same jobs leave this country as we are.

I believe that we can gain Democrat support. We will work to do that. But I know this. Man, I would hate to be standing there, saying, what we have for a tax code is just fine, because it's not.

CAVUTO: You know, I just think of the hoops that you and your colleagues went through then, Chairman, to try to prove that this wouldn't be a boon to the rich or whatever the argument was for keeping some of these other provisions in there, on the understanding that maybe you would corral some Democratic votes.

Now, that might still happen. It doesn't look likely. Do you think you wasted your time?

Look, this is time well-spent. Our Democrats have good ideas in tax reform. They stayed at the table to talk to us. So, I think it's early for them. We're going to keep the door open and keep discussing with them.

But all I know is this. Look, this -- the growth we have had for 10 years, where we can't compete anymore around the world, where businesses aren't able to bring in -- back their dollars and reinvestment in America, it's got to stop.

And I think defending Washington telling you what to do with your money vs. you having control of your money, I think Americans want control of their paychecks. We give it back to them.

CAVUTO: All right, has the president expressed support for all the provisions that you outline, Chairman? And by that, I mean, is he or could he potentially say, you know, I don't like what you're doing on the local and state tax thing, I think that that is a problem for a lot of my friends in my home state of New York, et cetera?

Or is he on board with this and backing you up every step of the way?

BRADY: He's on board and all in.

You can tell from his speeches around the country focusing on tax reform. We met again today. But we have been on the phone most days, if not several times, talking about this. He's all in on this.

And I think he recognizes, look, there are people who will have concerns. We're looking to making improvements at every step in the way.

And so he's essentially saying, look, go see Kevin. Talk about these issues. But we have to get tax reform to his desk by the end of the year.

CAVUTO: All right, so you think that timetable is doable out of your committee? I guess they're going to start voting on things within the committee on November 6.

CAVUTO: But out of the committee by Thanksgiving and out of the House by then?

BRADY: So, we will start on Monday for the first time in 31 years, pretty exciting, finish by the end of the week. And it will go to the House floor the week after that. So, yes, we stay on the timetable you describe.

CAVUTO: All right, what I didn't understand -- and, of course, a lots depends how this works out -- but $1.5 trillion that's been allocated in the budget for lost tax revenues, cut revenues.

But you have got about $5 trillion in there.

CAVUTO: Now, I understand some of the other rates, some of the things that are pushed off, all of that.

But it still doesn't seem clear to me how it is -- how it is paid for. If someone comes back at you and says, no, no, this is going to leave more than a $1.5 trillion hole in future deficits in the next 10 years, you say what?

BRADY: Yes, so, we know growth makes a difference. But -- but that will not be enough.

BRADY: Well, for once, they're treated right.

Our local businesses, again, corporations have usually gotten the cuts. Now our local businesses get significant tax cuts. And so, Neil, we have to eliminate a lot of this underbrush to lower those rates and balance this in the budget over time.

CAVUTO: All right, a number in the Senate, I know they have to concurrently come up with something. The Senate Finance Committee is working on it, I'm sure, in concert with you, Chairman.

But one of the ideas I heard a number of senators express on the Republican side is upping that $10,000 mortgage write-off cap.

Are you open to that? Is that something that you think would be negotiated, because a lot of people could end up paying higher taxes in those high-tax states without it?

BRADY: Yes. The answer is yes. We're open to finding solutions again, because we want to help people save money in every -- no matter where they live.

BRADY: One caution. You know, we're right at the budget number we have been given. So, any spending in one area will be have to offset somewhere else.

BRADY: And so we just need to take a good balanced approach.

CAVUTO: All right, well, whether people are for or against this, you were doing this when it wasn't -- when it wasn't even cool, Chairman, before Donald Trump was a candidate, before any of these guys got onto it.

No one has worked harder for this day.

CAVUTO: So, whether people agree or disagree with what you came up with, no one, I mean no one, on Capitol Hill did the sweat equity you did.

CAVUTO: So, we will see what happens, sir.