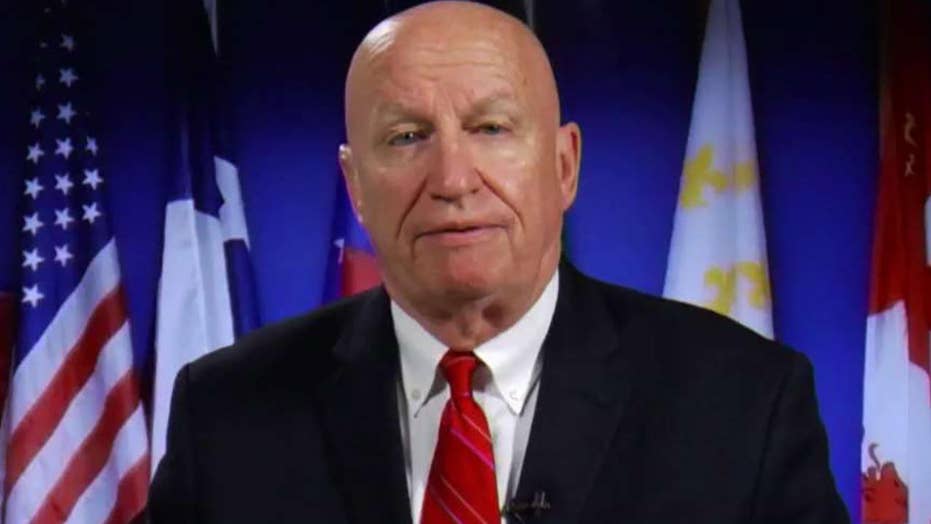 House Ways and Means Committee Chairman Kevin Brady says Trump is right to go after China for intellectual property theft. He offers insight on 'Your World.'

This is a rush transcript from "Your World," March 23, 2018. This copy may not be in its final form and may be updated.

NEIL CAVUTO, HOST: In the meantime, my next guest is really not a very big fan of tariffs, period, hopes that cooler heads ultimately prevail.

Remember, we got this 45-day window for that to happen, which the president was optimistic about today, that we could avoid any problems. He certainly hopes so. I am talking about the House Ways and Means Committee chairman, Kevin Brady.

He joins us right now.

Chairman, are you worried about these tariffs? Because if you think about it, the higher resulting costs in some items if they come to fruition could wipe away whatever benefits you see from these tax cuts.

Look, China does cheat. It does cost us thousands of American jobs. Every president has known this, but ever president faces same dilemma. How do you -- how do you stop China's cheating without punishing Americans while you do it?

He's taken the issue on. And I think one of the smarter things that the president is doing here is giving that 30 to 45 days to assess some of those potential tariffs to let industries suggest alternatives, better ways to tackle this.

I think it also buys time to actually have that dialogue with China about how do you start addressing the stealing of intellectual property, the forcing American technology transfer to China. And are there ways, cooperative ways, to lower that trade deficit.

So I think that the announcement also triggers an awfully important part of time for the dialogue to happen.

CAVUTO: Well, time is a wasting, right? I mean, the 45-day window on that to see what the Chinese do.

If they don't do anything and they do return a salvo with tariffs or targets of their own, then you're quite right to be concerned about the impact, the good impact you're getting on these tax cuts, right? That could be wiped out in a New York minute.

BRADY: And you don't want that to happen.

But I will tell you, just walking into the studios here, Silver Rock Studios, here in the Woodlands, I ran into a businessperson who's expanding on the other end of this building because of tax reform, is excited about what his customers are seeing. So we have got to keep that momentum going.

CAVUTO: Chairman, is it your sense that the president, doing this episode today where he explained grudgingly to the American people why he was signing on to this $1.3 trillion spending measure to keep the government going through the end of this fiscal year, when he said he wouldn't do it again, well, this stuff does happen again and again.

I'm not blaming him. I'm not blaming you. It's just the nature the bees. We keep seeing these things, where presidents of either party grudgingly sign on to something they don't like.

Do you take him at his word that if this were to happen again, he wouldn't sign it?

BRADY: I think his frustration is the same as ours, which is I think this whole budget spending process is broken. Everyone in Washington thinks it's broken.

And so part of that balanced -- or that budget agreement from a month ago was for actually House and Senate members to come together this year and come up the better way to do this.

I know from the House standpoint, we passed all 12 of those separate spending bills. We think that's the best way to do it. Senate, with their supermajority rules, wasn't able to do any of that. Then you get stuck with the bills like this.

But I will tell you this. So, this is the best opportunity in 15 years to rebuild our military. And I think -- I look back on President Reagan. His tax cuts that grew the economy, his rebuilding the military that had good outcomes for peace in the world.

Look, this president is following that same path. And this bill was a big part of that.

CAVUTO: I know there is hope, while you still have the majority. I'm not saying it's in danger in November. It could very -- but to make the tax cuts for individuals permanent.

But given the time frame, that looks pretty dicey. Are you optimistic you could still do that?

BRADY: Yes, I think we -- I think it's important to push that in a big way, because we made them long term. We think it's better if they're permanent.

But that's not the only part of it of. The reason we think we ought to continue to improve the tax code every year is that our competitors are doing that as well to give them an advantage over the U.S.

Plus, just like a business, you're looking to improve your products and service every day. Well, Congress should be no different. We should be looking every day at how we make our tax code more family-friendly, more pro-growth, more competitive around the world, and again, how do we spur that innovation that can drive the future for us.

And so I just want to change the culture in Washington, where they think they do this once a generation. We ought to be improving it continuously. That's what we're trying to do.

CAVUTO: Chairman, looking at the agenda for the rest of this year, it seems now that you got the spending measure through, so there's no threat of the government going lights out before the end of the fiscal year.

But there's very little likelihood, it would seem, to get to some of the tax cut stuff additionally that you want to do. So is this what we have got? Is this the best we could look more ahead of the midterms?

Here's a good example. So we have a new tax code, and it really demands a new IRS. And so Republicans have been working in the House for the last year and working alongside Democrats on how do you redesign the IRS, so it really is taxpayer-friendly, so it is really is focused on efficiency and accurate answers and customer service in a big way?

So we're working with them on an April package of bills that actually redesigned the IRS in a way that's 20 years overdue. We also think there's bipartisan ways to improve and help people save more and earlier in life.

We have talked about that, Neil, before. We think there's some bipartisan improvements that could go forward. And my thinking is, let's do the work, put it in the position, just as in tax reform. There are skeptics. I understand there's good reason for it, but that doesn't mean we ought to be-- ought not be moving these good ideas forward.

CAVUTO: Real quickly, sir, when you negotiate and discuss and meet with the president and talk with the president, are you concerned about all the personnel changes? You know, this is going through now his third national security adviser.

The upheaval seems to a lot of folks to indicate a White House in disarray. Do you agree with that, and does it does it concern you?

BRADY: Well, in the space I am in, it's been pretty stable, the ability to work with the president directly on tax reform with Secretary Mnuchin. Gary Cohn was a huge asset.

Larry Kudlow had a longstanding relationship with him. And he's where -- I think he's like minds with so many of us that -- on tax reform and trade, a number of those issues.

And so in the space I'm in, there's been consistency and there's been an awfully good dialogue. And so that's the area that I think is a positive part.

CAVUTO: All right, Chairman, thank you very much.

CAVUTO: Kevin Brady, the man who runs the House Ways and Means Committee.