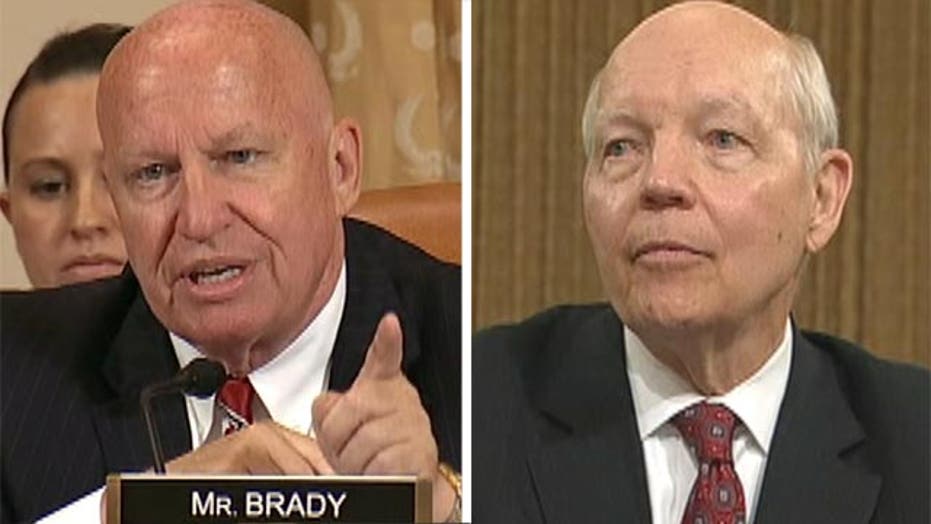 This is a rush transcript from "The Kelly File," June 20, 2014. This copy may not be in its final form and may be updated.

MARTHA MACCALLUM, GUEST HOST: Earlier, IRS Commissioner John Koskinen faced an outraged group of lawmakers on Capitol Hill who say that they and the American people have been misled by him and by his agency when it comes to the IRS targeting of conservative groups. Lawmakers asking why it took more than a year for them to find out that the e-mails from the woman at the heart of this scandal appeared to have vanished quite some time ago, and that her hard drive have been quote, "recycled," losing the exact e-mails that they were seeking. Strange, right? Here are some of the most heated moments from today's hearing.

REP. DAVE CAMP, R-MICH., HOUSE WAYS AND MEANS COMMITTEE CHAIRMAN: What I didn't hear in that was an apology to this committee.

JOHN KOSKINEN, IRS COMMISSIONER: I don't think an apology is owed. There is not a single e-mail that has been lost since the start of this investigation.

KOSKINEN: We told you on Monday.

KOSKINEN: And what did you do with the --

RYAN: Because we asked you!

You are the Internal Revenue Service. You can reach into the lives of hard working taxpayers and with a phone call, an e-mail, or a letter, you can turn their lives upside down. You ask taxpayers to hang on to seven years of their personal tax information in case they're ever audited, and you can't keep six months worth of employee e-mails?

I don't believe you. This is incredible.

KOSKINEN: I have a long career. That's the first time anybody has said they do not believe me.

RYAN: I don't believe you.

RYAN: Being forthcoming is to say -- you know what, investigators, Congress who's investigating this --

UNIDENTIFIED MAN: Will you let him answer the question?

RYAN: I didn't ask him a question!

UNIDENTIFIED MAN: Yes, you did.

This is just Americans frustrated. With an arrogance of an agency that is above the law in their opinion.

That was Texas Congressman Kevin Brady, he's the Republican and senior member of the House Ways and Means Committee. One of the constituent of his constituents is among those who was allegedly targeted by the IRS, waited for years to get an answer from the IRS about tax exempt status, and was, you know, from a small town just trying to have their voices heard. Good to have you here today, Congressman, welcome.

MACCALLUM: You know, here's the thing. Today was troubling on many levels, obviously. But what the problem appears to be is that where do you go from here? You know, what's the backstop? Where's the recourse? If the Department of Justice is not willing to take it seriously and to make sure that this hard drive is investigated for potential criminal charges of destroying evidence, how are you going to get anywhere in this entire investigation?

BRADY: You know, we're going to have to continue to do what we have been doing, which is continuing to dig and dig and dig. Use every tool we've got to try to get the information. We obviously want to use our technology experts to determine if what the IRS is saying is true. What we know from the commissioner today was, one, he withheld key information for months from this congressional investigation. Two, he misled the committee again by saying that he delivered all the Lerner e-mails. Clearly -- and he knew at the time he could not do that. And so we've got continued uphill battle because they're stonewalling.

MACCALLUM: It seems to me, you know, if you're in a situation where Congress is investigating your agency and you know that the e-mails that they specifically are looking for no longer exist, that they've been crashed, wouldn't a normal reaction to that be just call up and say look, you know, I'm concerned about this. I just took over in this job heading this agency. I want you all to know that there's a technical problem that's going to sound very fishy when it comes out, but here is what happened. Why do you think that never happened?

BRADY: Well, it is unbelievable, because that's what everyone in America would have done. They knew in February they had a problem. The commissioner confirmed in March that they knew it was real. They discussed it with treasury the next month who urged them to communicate to Congress. Then they said we will deliver all the e-mails knowing it wasn't possible.

MACCALLUM: They said we've got them, they're forthcoming, don't worry, we're going to give them to you after they've been made aware that that entire hard drive had crashed. It belies credibility, frankly. But I do want to have you listen to this sound bite from the White House spokesman who spoke today, Josh Earnest. And here's what he has to say to you and your colleagues.

JOSH EARNEST, WHITE HOUSE PRESS SECRETARY: There's zero evidence to support Republican claims. And that's even -- you know, again, these are investigations that have a pretty transparent political motive. So I'm not sure that there's a whole lot more to be discovered here.

MACCALLUM: He says there's nothing there.

BRADY: Yes. They've been saying that since day one because they don't want anything discovered. This is the same White House, we can remind ourselves, that told us this was a few rogue agents in Cincinnati. That was disproved within two weeks. Then they claim that liberals and conservative organizations were targeted. That was disproved within the month. And so they have no credibility either. And I guess what's frustrating is to have the commissioner of the IRS say, repeatedly that no e-mails have been lost since an investigation started, knowing that the targeting began before the investigation. Those are the e-mails we're seeking and we've already, from what we've dug up, developed at least three credible, convincing areas of evidence that violations have occurred.

MACCALLUM: It would be interesting to know what the president thinks about this, having said during the investigation that he already knew that there was not a smidgen of corruption here. It would be great to know what's going to his mind when he heard this testimony about these hard drives. Maybe we will find out. Thank you very much. Good to see you here tonight, Congressman.