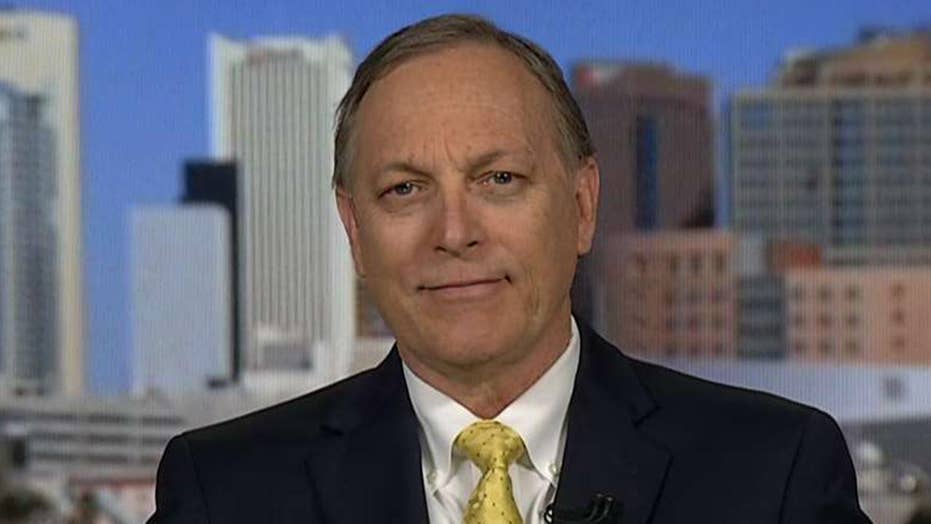 President Trump is looking to cut spending from the budget bill that was just passed. Rep. Andy Biggs of the House Freedom Caucus joins 'Your World' to discuss what he expects.

This is a rush transcript from "Your World," April 5, 2018. This copy may not be in its final form and may be updated.

So I would imagine, sir, you welcome this latest development.

I'm excited to see the recisions looks like. It's instituted by the White House. They initiate the action. So the president is going to have to make a list of unencumbered accounts that he wants to attack and pare back.

I'm excited to see what that list looks like. And I hope it's as expansive as President Reagan was in the early '80s, because President Reagan rescinded about $45 billion over the course of his presidency.

CAVUTO: Now, what happens with other Republicans, though? They were just happy in the end, even though they didn't publicly say so, to wipe their hands of it and say, all right, we got this done and approved and we're out of here. Some of them might not be as happy.

BIGGS: Well, I think that, in the end, we want to get toward a balanced budget.

So, they may not be real happy that we're doing some paring and pruning afterwards, but this bush is overgrown. And it's time to cut it back. And I think that many of them are going to say, here's a chance to go back, because I don't think our base was real happy with us.

So, here's a chance to go back and say, look, we heard you, we're going to cut back some spending. And I think that's a good thing.

CAVUTO: Switching gears, if you don't mind, sir, we're getting word from Nancy Pelosi, and this leaked out from conversation and strategies she's wearing with colleagues, that if the Democrats were to retake the House, she wants to revisit your tax cut, Republicans tax cut, the one that became law, and just, you know, rip it apart, said that it was all tilted to the rich.

BIGGS: Well, say, well, that's why we need to win the midterms for the Republicans, because she's already talking about increasing personal income tax and the corporate income tax.

And this gets to my whole point all along is they just -- Democrats and many of them just fundamentally don't understand the economy. And the economy really moves and circulates and is stimulated when individuals keep their money, when corporations can keep their money and reinvest in their businesses and create jobs.

And that's what we're seeing. We're having record revenue in the federal tax coffers because of the economy starting to really heat up. And that's a good thing.

CAVUTO: All right, but you're also having record deficits. So, I'm not saying that's exclusively your fault, but the Republicans are going to be the stewards of what will likely be a trillion-dollar deficit this year.

So I guess what I'm asking you is what Republicans will counter with. If Democrats were to take over in the House, what would be your argument for keeping those cuts and trying to avoid deficits from getting worse?

BIGGS: Well, I think that the fact that the reduced regulation in the tax reform has produced record revenue every month coming into the federal government for about six, seven months now.

I think that's indicia that lower taxes actually increases federal revenue. And that's not intuitive. I realize that. But that's exactly what happens. We have seen it over and over again.

CAVUTO: But you know what has happened. I know you were trying to address this and some of your Freedom Caucus members are trying to address this. This is why you were concerned about that $1.3 trillion spending plan, because a lot of American voters, as you know, Congressman, are saying, well, you know, Republicans talk a good game on this, but they don't rein in spending.

And maybe Nancy Pelosi is right. You say what?

BIGGS: Well, I say that Americans may be right. The Republicans have got to cut spending. We have got to be tougher on that.

CAVUTO: Well, you're running out of so far's, right, because November is not that far.

That's why the recisions, I think, mean a lot. We can move some of that down. It's still going to be deficit spending, but -- but if we're going to say that the Democrats are going to bring a balanced budget, they're not going to.

CAVUTO: No, you raise a very good point. It's a little rich for Nancy Pelosi to come out and bemoan deficits and the rest.

CAVUTO: But it is what it is. Right? It's a weird world.