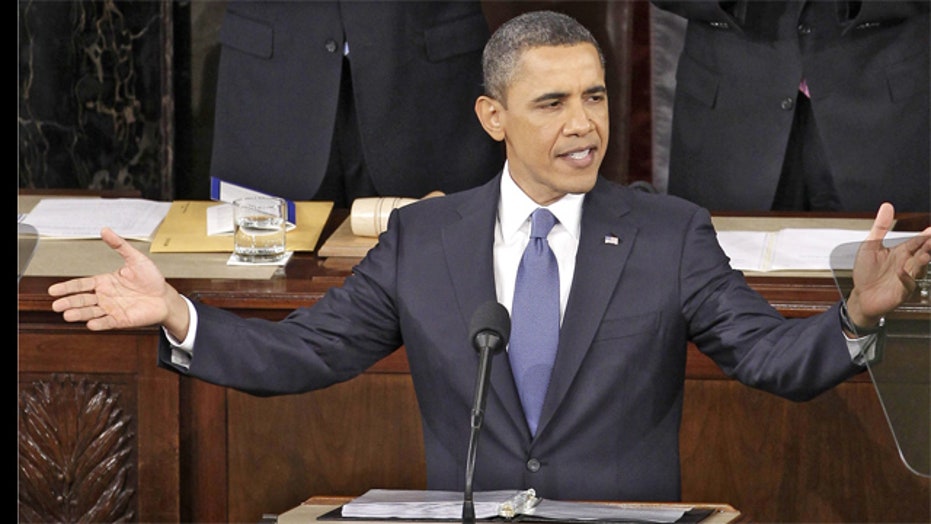 Remembering Obama's promises from State of the Unions past

Can we trust new pledges?

PRESIDENT'S PAST PROMISES IN FOCUS AHEAD OF STATE OF THE UNION

MICHELLE FIELDS: No one is going to tune in to the State of the Union address because they're tired of these broken promises. I think Americans would rather sit and watch grass grow than listen to another speech from Obama. His greatest achievement for his presidency was Obamacare and it ended up being a lie, a fraud. People are tired of it. That's why if you look at the polls since November he has dropped eight points with the American people when it comes to trustworthiness and honesty, because they know he's just filled with broken promises. It's just a bunch of rhetoric.

KIMBERLY GUILFOYLE: "No-bama", that's my answer. If he's saying it, that's my answer: no. it doesn't sound like a good idea. I don't believe it, and all he's trying to do is basically redistribute wealth, take money from the people that are trying to stimulate the economy. He stifles the free market. Business regulations-all of these things are the things that we need to change, fundamentally, the direction that this administration is going in. Unfortunately, we're stuck with it for the next few years, but the problem is at least hopefully congress can do something to try to stop these ideas that he has.

JEHMU GREENE: I think we have to look first at the fact that income inequality has been growing for the past 4 decades. So I'm glad we're actually saying those two words on this show. It is important to be focusing on it, so one, that's what the President is doing by talking about it, bringing it to the nation's attention. And the fact that productivity is up, the stock market has bounced back, our percentage growth GDP is off the charts, yes we have to focus on the fact that this has not trickled down to the workers, and so the President saying that is necessary.

WAYNE ROGERS: First of all it's a bad idea to try to make everybody equal. Equality is the opposite of freedom. As you've heard me say many times on this show, Americans are enamored with equality instead of freedom. The fact of the matter is the President can't fix it because the economics that he is proposing is not going to fix it. We have got to get back to a free market system. That's the way you raise income. We talked about this about a week ago. The three bottom nations in the world in this area are Cuba, North Korea, and Zimbabwe. Why? Because they're totalitarian governments. There is no freedom. That's why they're bad. We have got to have freedom in the economy.

KIMBERLY GUILFOYLE: Unfortunately this is [another example of the left trying to silence the right]. This is no surprise to me, knowing a lot of people in Hollywood-filmmakers, producers, directors, actors-they have no time for this and they have no shame about overtly just saying "we're going to cut this film out. This isn't going to happen." It's not their POV. Not their point of view, not their ideology. They don't want that information to get out there because it would actually educate people, like people who watch Fox News, who actually know the truth.

WAYNE ROGERS: I have to defend Hollywood here. This is not a Hollywood film festival, it's a festival taking place somewhere else, as you well know. So it doesn't have to do with Hollywood people being mixed up in this.

MICHELLE FIELDS: It is a free speech issue, because this festival is actually subsidized by taxpayers. They got $60,000 from taxpayers. I think it's clearly a violation of free speech if they're getting money from us and they're deciding which political agenda they want to put out there. That's what they're doing. They are endorsing a point of view and censoring another point of view. Censorship? You don't think that's a violation of free speech, Jehmu?

JEHMU GREENE: I think Michelle should get a dictionary and look up what free speech is. Let's look at the facts here. We're talking about a private company that made a decision and we're saying that decision was wrong. I thought that's what you all support. This is a bought and paid for commercial by the energy industry and the director lied about it.

MICHELLE FIELDS: I think he's absolutely wrong. It's really difficult for me to get outraged by the fact that someone isn't paying more money to the government. I think it's a good thing to have money in the hands of ordinary people, rather than a government bureaucrat. And like Wayne said, the individual franchises pay taxes. They pay taxes on all of the merchandise, so it's just the administrative arm that isn't paying taxes. I don't think that's a bad thing.

JEHMU GREENE: And the top 5 executives made around $60M. They spent $12.7M on lobbying. Their overall revenue is $9B. I have been saying this on this show since last summer when the IRS supposed "scandal" came up: the NFL as a non-profit organization-that's what people should be up in arms about. This is a company that is the most lucrative sports company in the world. Yes, they need to be paying taxes. I agree with Tom Coburn.

KIMBERLY GUILFOYLE: So sweet daddy, what do you have to say about that, and the taxes in your organization? (To Wayne, on being the owner of an MLB team)

WAYNE ROGERS: "FIRE UP" YOUR PROFITS WITH (SWHC)