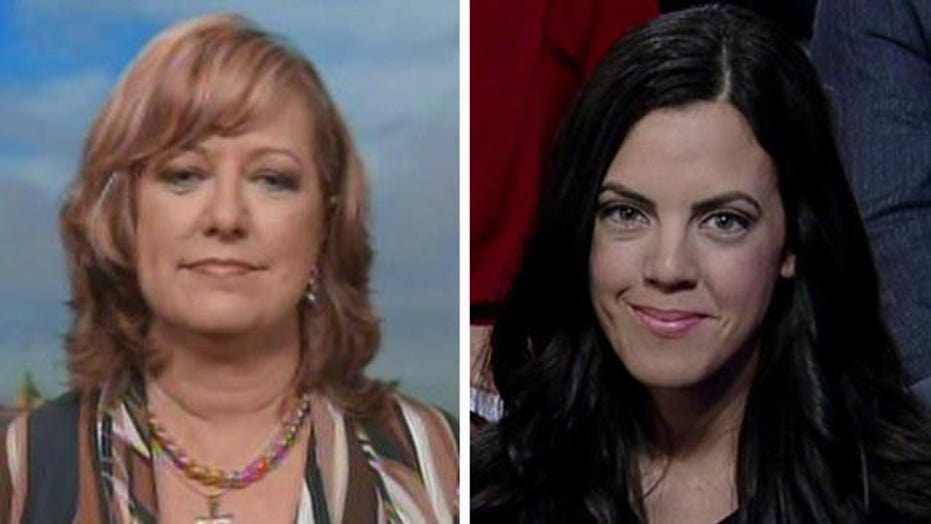 This is a rush transcript from "Hannity," November 1, 2013. This copy may not be in its final form and may be updated.

SEAN HANNITY, HOST: And welcome back to "Hannity." We are continuing tonight our week-long series which we have entitled "You Were Warned." Now, back before ObamaCare was ever passed, we highlighted right here on this show the dangers of what would happen if the law was, in fact, implemented.

Now, my next guest -- she shared her story with us during a "Universal Nightmare" special that we had in 2009 about her fight against cancer and her concerns about what could have happened if the changes in health insurance were in place when she was, in fact, diagnosed. Take a look.

KATHERINE HALE, CANCER SURVIVOR: I was diagnosed with -- they said a walk in the park cancer. Had surgery by a gynecologic oncologist. After the surgery, he says, "No, it's much worse than we thought. You have no more than six weeks to live. Don't even try chemo. You'll die from the treatment of chemo. The chemo won't even touch the cancer." And that was it.

UNIDENTIFIED FEMALE: If she did not have that second opinion, she wouldn't be able to participate in these interviews.

HALE: If I was living in a country where you don't have a choice to go to a specialist, I would have done whatever it would have taken to come to the United States of America. And here I am today, 7 years, going to be 8 years next month.

EARHARDT: For Katherine, those eight years have meant seeing her children grow up and the birth of her two grandchildren.

HANNITY: Joining me now, the woman you just heard from, Katherine Hale, and also in our studio audience tonight is Natalie Willes, who received notice that her plan would be terminated and all of her new options would be more expensive and provide less coverage.

Ladies, thanks so much for being with us. Thank you.

Well, first of all, Katherine, I guess six weeks now has turned into 12 years (sic), thank God. You're doing well, I hope.

HALE: Praise the Lord. Thank you, Sean, I am.

HANNITY: That's really, really good news. All right, where are you now? "Obama care" -- you were one of the people speaking out very early on. You were on our "Universal Nightmare" special we had. Where is your plan now? Where are you with health care now?

HALE: Well, I've given it my personal name. It's the so-called no-brainer fair (ph) health care. We are able to compare apples to apples in our situation. My husband is still employed with the same national company. We've aged a little bit. We're on the other side of 50. But no major changes in our lives.

But our insurance life has drastically changed. The good coverage that we were able to have is no longer available. There is a lesser tier of coverage available at a higher cost. The out of pocket is much higher. The -- it is so high for some people that they are offering a gap coverage in $15,000 and $30,000 increments.

HALE: So that if you do become ill, have a heart attack, have a stroke, you're not going to dip into your retirement savings or lose your car or your home or tell your kids they can't go into college.

HANNITY: What about you with your pre-existing condition and the fact that you had had cancer?

HALE: Life insurance is not an option. And as far as my care, you know, my follow-up care that I receive at MD Anderson, it's going to cost us a lot more money.

HANNITY: So in other words, you have -- are you with the same employer, just to...

HALE: Yes, that's what I was saying that we are able to compare apples to apples because employment situations are still the same.

HANNITY: So you're being offered less coverage, an increased premium, increased deductible. And how do you know this is directly related to "Obama care"? Are they telling you? Is that the reason that they're giving you officially?

HALE: Yes. We have a very nice pamphlet from the insurance company. And it -- you know, it doesn't directly say it, but they don't have to.

HALE: And it does say the law mandates -- you know, there's little innuendoes in there. We know what it is.

HANNITY: No, no. Were you going to read from it?

HALE: Well, I was just going to tell also that the other sad part about this change is we have no freedom. It's supposed to be fair insurance for everybody. And that would be great if that could happen. But this is not the way to do it. And we're also forcing Catholics and other Christians to pay for abortion and medicines and birth control that is against the religion.

HANNITY: Well, we had a court decision today on that in the second district court in D.C.

All right, hang on right there. And I want to bring in Natalie. How are you?

NATALIE WILLES, BABYSLEEPTRAINER.COM: Good. How are you?

HANNITY: OK, and you have a Web site, Babysleeptrainer.com.

HANNITY: Where were you when I had my two kids?

WILLES: I don't know. How old are they?

HANNITY: Do you train 14-year-olds to go to sleep?

HANNITY: If you do, whatever that is, you're going to make a lot of money real fast.

All right, so you have your own company -- by the way, that's pretty cool.

HANNITY: What a great -- and I bet business is booming now?

HANNITY: Yes? Tell us about your health issues, health care.

WILLES: So I have always carried my own health insurance plan. It's always been very important to me that I be insured. When my husband left law school, I had to get my own plan. So I found an insurer after I had been denied by other insurers for some pre-existing condition. I was accepted by my insurer. So I carried a great plan.

After I had my son, I decided to step down and take what was considered their catastrophic plan. So this plan has a $1,500 deductible and a $3,000 out of pocket maximum. I've been to the doctor several times. I've never felt like I've been gouged, love my plan. Didn't go on my husband's plan, great plan.

So now all the plans that my insurer currently carries are all being canceled and they're being replaced by new compliant plans. So if I want to pay the same premium that I'm paying now, I will be doubling or tripling my deductible and doubling my out of pocket maximum. If I want to keep some sort of equivalent coverage, then I will be paying about 40 percent more.

There really isn't equivalent coverage with my insurer. So I'm looking at either having to pick something from the exchange...

HANNITY: Yes. And by the way, so everyone knows, you've been on Healthcare.gov. By the way, you need to talk to Ainsley Earhardt. We've been trying here four weeks to get on this...

WILLES: I have been onto the California...

HANNITY: You got on.

WILLES: Yes. Sot the California plan is OK. It doesn't work -- or rather, the exchange is OK. It doesn't work super-great with my browser, but you know, it's OK. I've been able to -- there's I think 30 plans available to me, six different providers. I've gone and looked at each one individually, checked what my -- you know, like, would it would cover, what hospitals I could go to, but there's really nothing that's the same. Any way that I do this, I'm either going to get way less care for the same amount money, or I'm going to have to pay more.

HANNITY: What do you think when -- and I hope Rick Ungar's paying attention in the background because I'm going to beat him up about your case in a minute. But in all seriousness, you're 29 years old. Your husband worked hard to become a lawyer. You built a great business. You were responsible. You want your own care.

HANNITY: It's not a crummy plan?

HANNITY: What do you think about a president of the United States that now has lied to you?

WILLES: I like to think the best about people. So maybe he was misinformed. Maybe he didn't read ObamaCare.

HANNITY: What's worse, lying or not reading it?

WILLES: I don't know. It's really long, so probably changed (ph). I don't know what the...

HANNITY: Can I ask a question?

WILLES: Far be it from me to stay anything bad.

HANNITY: What would be worse, not reading it or lying about it? If that's the two options you're providing, which one is worse?

WILLES: Lying. Lying is worse. That's probably why I'm giving him the benefit of the doubt. Lying would be worse.

HANNITY: So you're going with the option he didn't read it.

WILLES: I think earlier what someone else had said that they want -- the ends justify the means. I'm going to say that that's probably what happened.

WILLES: I'm sure that he knew and that he thought, We have to convince people to do this anyway.

HANNITY: You want to fix something that is so broken...

HANNITY: ... and so dilapidated. You're-

SCHOEN: ... for the American people, Sean. That's what we all want!

HANNITY: All right, we will take a break. Be right back. Thank you for coming. And also, thank you -- I want to thank Katherine, as well. Thank you for being with us.