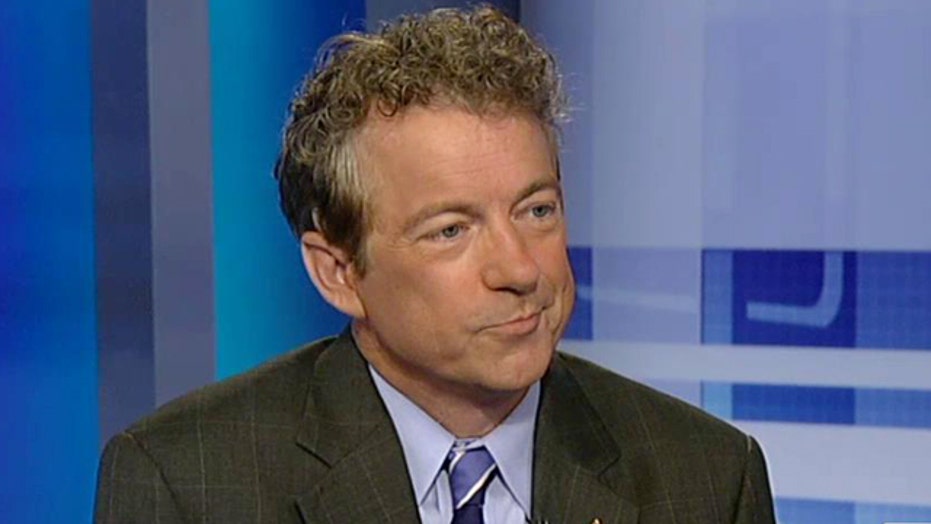 Presidential candidate on the IRS giving $18M in contracts to firms with tax debts, plus his new plan to change the tax code

This is a rush transcript from "On the Record," June 24, 2015. This copy may not be in its final form and may be updated.

GRETA VAN SUSTEREN, FOX NEWS HOST: So how do companies that owe taxes get money from the IRS? Would anyone be held accountable? Well, don't hold your breath, right?

Presidential candidate, Senator Rand Paul is here, and he wants to throw off the current tax code, and put in his idea. He joins next, good to see you, Senator.

VAN SUSTEREN: First, just a thought on the report that the IRS was paying millions to tax-cheating contractors.

PAUL: Well, it's not hard for me to believe, they also do this to federal employees that have back taxes of $3.5 billion.

PAUL: And you would think we have somewhat control over them. They work for the federal government, why couldn't we deduct their taxes from their check. So that has been a proposal that's been floated, and we haven't been able to get it through.

VAN SUSTEREN: How could you not get that through? If someone owes money -- I don't understand why Al Sharpton gets the red carpet at the White House either until he becomes current in his taxes.

PAUL: A lot of the good sense things you can't get through. I have a bill that would give bonuses to federal employees if they'll find savings, and turn the money back money into the treasury. I get nothing but resistance from the appropriators.

VAN SUSTEREN: It's just insane. All right, let me ask you about your plan for taxes which is what?

PAUL: Our plan is to get rid of the old tax code. We looked at it and we said could we make it better? And we became convinced that it's just so bad, so big, and so ugly, we ought to get rid of the whole things. Our current tax code is 70,000 pages, and we think it chases jobs and companies overseas. Burger King has fled to Canada. Every month, there's a new company reincorporating in Europe because of our taxes. So we got rid of the whole tax code, and we have one flat rate, 14.5 percent for a business tax, and 14.5 percent for personal income tax.

PAUL: Yeah, currently right, now most individuals who make 50 or under don't pay any income tax. So under our system they still wouldn't. But we go one step further because we want the working class to feel like they are part of this tax cut, and so we get rid of the payroll tax. Payroll will now be taxed as part of the business tax, but the individual worker, like if you make $40,000 a year, a couple with two kids, you would actually get a $2,000 reduction by having not to pay any payroll tax.

VAN SUSTEREN: What about the revenue to satisfy like our debt or to pay for our national security.

PAUL: We would cut spending, and we'd cut it in a dramatic way. But people have said...

VAN SUSTEREN: What spending though? I mean does that matter? First of all, if you collect this $3.3 billion that are owed by federal tax -- federal employees that would be a good start.

VAN SUSTEREN: Have you run the numbers on all of this?

PAUL: Yup. The tax cut actually scored statically, would almost be $3 trillion tax cut. But we would make up for it by cutting spending. I have introduced three five-year budgets that balance in five years, with cutting significant amount of spending. But the thing is, is that the Tax Foundation has looked at this, and would add a couple million jobs, would add 10 percent to our GDP over ten years.

VAN SUSTEREN: All right, here's the problem, because I talked to Senator Orrin Hatch, who's Chairman of the Senate Finance Committee, and who would like to change the tax code as well. He said he can't get 60 votes. And so if you came with your idea, President of the United States, let's say that you wanted your idea, you still have to get it through the House and Senate.