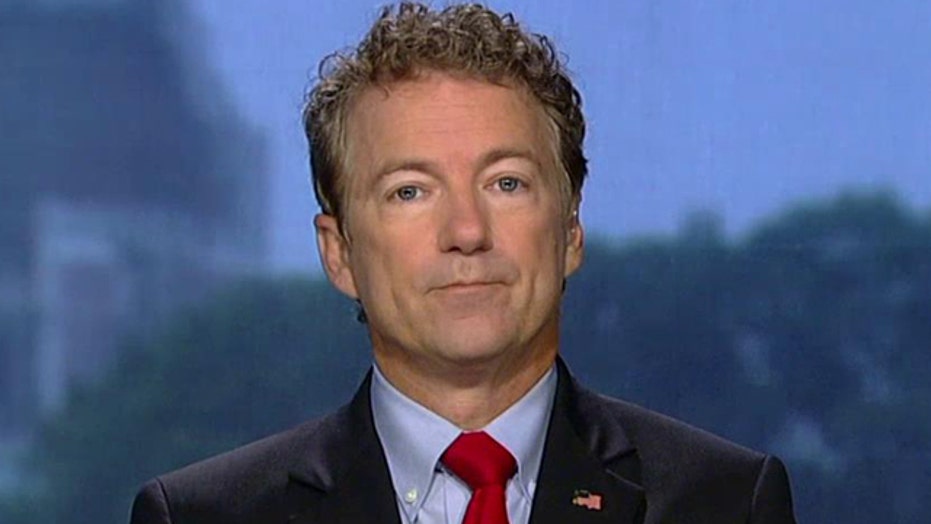 SEN. RAND PAUL (R-K.Y.): Our tax code has been chasing companies and jobs overseas for years now. We chased Burger King to Canada; we keep chasing companies that are overseas. Some of America’s greatest companies won’t bring their money back because of our tax code. So we just decided to get rid of our entire tax code and start over with a 14.5 percent rate. This would be a 14.5 percent business tax, and a 14.5 percent personal income tax, and everybody would pay it. It would be different from the current system where some corporations and some individuals file tax returns that are tens of thousands of pages long in order to avoid paying any taxes. Under our system everybody would pay, everybody would pay 14.5 percent. But the interesting thing that nobody has ever tried before is we get rid of the payroll tax. So every working class American in our country will no longer pay payroll tax. It’ll be part of the business tax. This will be great for those who are just struggling to get by making $30-40,000 a year with a whole family to feed. So this would be a great tax cut for the working class.

MICHELLE FIELDS: I think this is a terrible idea. It’s a waste of taxpayer dollars. Imagine how much money it’s going to take to purchase all of these, insert them, track them, and then take them out of the criminals when they’re done. And what stops a prisoner from cutting them out when they escape prison? It just doesn’t seem like it’s very well thought-out. And then there’s the privacy issue; I don’t think this is constitutional. It’s very Orwellian. So I am absolutely against this idea.

JONATHAN HOENIG: This is the modern-day incarnation of the ankle bracelet that we use to track criminals all over the place. I’m sorry, but jail isn’t supposed to be comfortable. I have little remorse for violent criminals who are in jail right now. The problem isn’t the cost of the implants and these microchips; it’s the cost of the jail system. 3 percent of the jail system is homicides; 50 percent are drug offenders—and a lot of them non-violent. That’s a good place to start with cutting costs.

WAYNE ROGERS: It just seems ridiculous that you have two prisoners escape a maximum-security prison— I think that’s the first time at that prison where they had someone escape—and you’re going to have a whole revolution based on that? What difference does it make? You lose two prisoners every now and then; big deal.

JESSICA TARLOV: I am against it. I just want to say Wayne is exactly right. This is an outlier case. It seems like a movie and it’s really exciting in that way, but we don’t have an escapee problem. In 2013 we only lost 2,000 prisoners, and a majority of them were just walk-aways. This isn’t really the main problem, here. The problem is we’re imprisoning people for crimes they shouldn’t be there for, and we need real prison reform—which is not microchipping people.

JONATHAN HOENIG: Certainly business will be hurt in some local areas. Sharks are scary. This is 40 years after Jaws came out. They’re really scary. Attacks are unbelievably rare, though. There’s only about one shark attack fatality every-other year. You literally have a better chance of dying from surfing. I just think it’s like Ebola, like swine flu. We look at these pictures and get really scared. But you have to think with your head, not with your heart and go to the beach this summer.

MICHELLE FIELDS: I think that people will still go, I just don’t think that they’ll go into the water. They’re probably going to do what I do, which is just hang out by the beach and not actually go surfing or go in the water. I don’t think it’s going to hurt local businesses.

JESSICA TARLOV: I think Jonathan and Michelle are largely right. I think the important thing is to get out the right information, which is that sharks attacks have been growing since 1900, but this isn’t a serious problem. You have very low odds of being attacked by a shark. I think that’s really the end of it. It’s all really a media game here; the more we publicize it, the more nervous people are going to be. So we should get the real facts out there.

WAYNE ROGERS: These attacks took place in waist-deep water. Most of the attacks from sharks, people see the shark and get out of the water. I’m here in Pensacola, Florida…we had a shark attack here I think two years ago and people are all over the beaches out here. It’s not affecting anything.