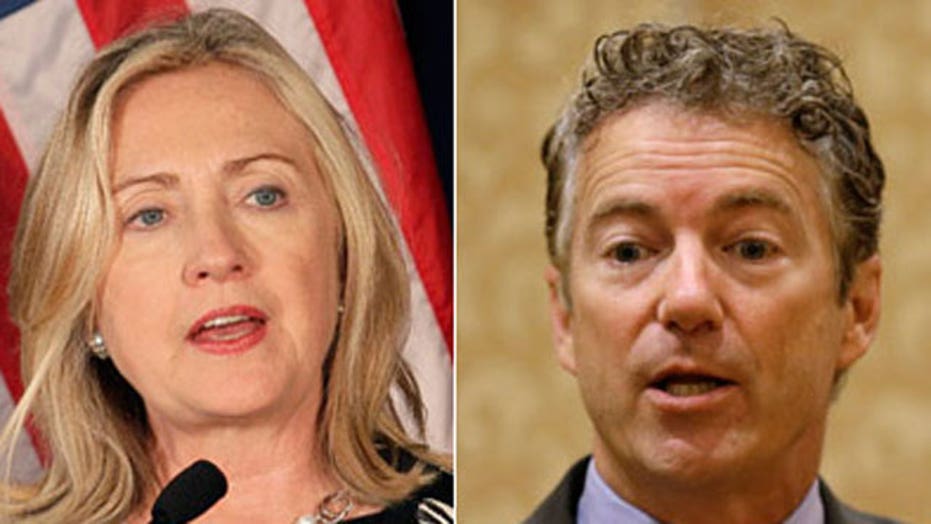 Lawmaker predicts scandal will sink Clinton on 'The Kelly File'

This is a rush transcript from "The Kelly File," April 17, 2015. This copy may not be in its final form and may be updated.

SEN. RAND PAUL, R-KY.: There's going to be stuff coming out about the Clinton Foundation and their donations from different companies that get special approval by the Secretary of State. Coming out in the next couple of weeks. Are we going to hear any questions from the media? Or will it be a love fest to Hillary Clinton?

KELLY: Joining me now with more, Alan Colmes, host to the "Alan Colmes Show." What -- first of all, what's he talking about?

ALAN COLMES, HOST, "THE ALAN COLMES SHOW": He's talking about I want to be president of the United States and I don't want to face Hillary Clinton because I don't want her to come with me. You know, great tease, right? Scandal is coming. I don't know.

KELLY: It's very strange, right? Why is he just...

COLMES: It's a great tease.

KELLY: ... trying to titillate people. Why don't you like either you got it there or you don't have it.

COLMES: Let's show what you got, you know, rather to say this is going to be a scandal getting people all revved up, you know, putting the words scandal next to Clinton...

COLMES: Right. What does he know?

KELLY: It is so big that it's going to derail her campaign, so should we be really laughing about it? Like, what is it?

COLMES: Well, I'm not -- this may shock you. I'm not inside Rand Paul's head. Not sure I want to be there.

KELLY: I'm not sure he wants to.

COLMES: But, I mean, I clearly -- he is trying to set some -- hey, maybe he doesn't want to run against Hillary Clinton and would like to find some way to get her out of contention.

KELLY: I'm sure -- I'm sure many of the Republicans would feel that way. She is the most powerful Democrat...

KELLY: ... who's even potentially win the race.

COLMES: Right. So, if they can put her aside --

KELLY: But let me ask new in all seriousness because he expanded early on a little bit on this and he told our own Sean Hannity, she's in-charge of approving business deals as secretary of state. Anything that relates to our security. He said there is going to be something coming out about companies she approved those deals for, Hannity asked him that she was first against it and then became for it after money went to her foundation. And Rand Paul said significant amounts, over $100 million being given to her foundation coming out in the next two weeks.

So, it sounds like it's a, she denied them as something as secretary, they paid her foundation then she approved something.

COLMES: There's also -- idle speculation at this point. If indeed it's true that she A, gets to approve business deals as secretary of state, which I question, and then she approved a deal that somehow benefited the person who got the deal but concerning a decision she could make, you'd have to prove all that. That's a lot. That's a lot of heavy lifting you have to do.

KELLY: But do you think that, you know, what they really need to do if they want to disqualify Hillary Clinton is disqualify her with the Democrats, right?

KELLY: I mean, because she is by far and away the leader of that pack. So, I mean if something like this even potentially going to bring her down with her own party?

COLMES: No. First of all people aren't focused now on 2016. You know, we love the stuff, we're wonky (ph). We love to look at the stuff. Viewers of Fox News love all this stuff. Many voters are not even thinking about 2016 yet. And they're throwing all the stuff at her now which probably helps her. Throw what you got, get it over with and then by the time people are actually focused...

KELLY: Yes, but only if she would come out and speak to it, right. Because if she doesn't speak it to and then weeks go on, the first time she sits down with somebody is going to be this is all the stuff they want to talk about.

COLMES: Does she have to speak to every tease? Every allegation? Right? All we have is a tease.

COLMES: Like we have on TV shows. You know, coming up next...

KELLY: It's not my fault. Take it up with Rand Paul.

COLMES: Well, let her come on "The Kelly File"

KELLY: This is a legitimate gimmick for president who's saying that there was going to be a disqualifying scandal coming out about her.

COLMES: But let her come on this show and address it directly. That's the way she should do it.

KELLY: I like the way you're thinking, Alan. All right. And up next, we have determined whether it was a llama or alpaca. And now we know the difference.

Alan, it's great to see you.