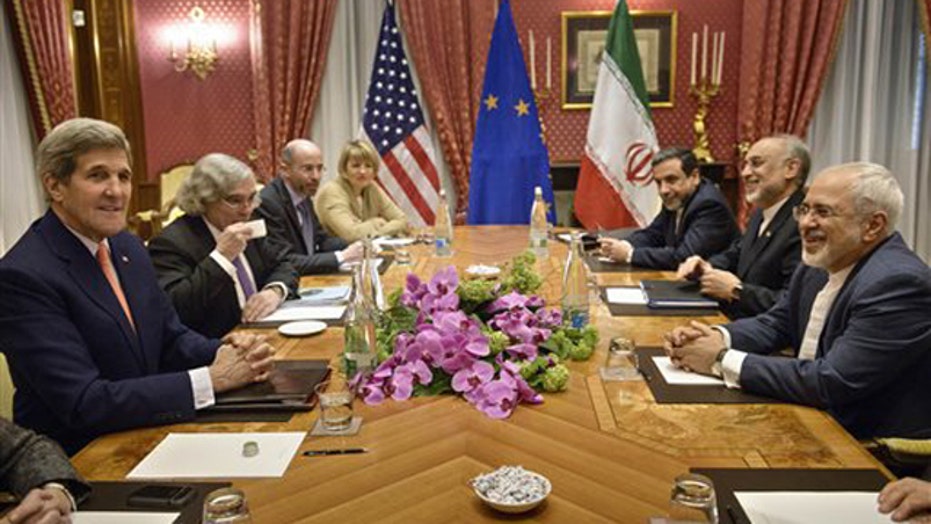 Charles Payne: This is scary stuff. President Obama began as president of the united states with his tour around the world vowing to world leaders and one world nation, we are all equal, all the same. This is taking that ideology to a different level. It was unseemly when he was hugging the Bergdahl family. Even if he thought it was a good deal. Why the pomp and circumstances? Why the rose garden deal. He is so involved with his ideology. What kind of crazy deal could you be putting together?

Charlie Gasparino: Calling ISIS the JV team, you have to question Obama. Not unintelligent, smart guy, but you have to question his intelligence. He has made one misstep after another. He would shoot you back saying i didn't get us involved in Iraq. That was the misstep of all missteps, which he is kind of right about. For us to trust him with a nuke deal with Iran right now following Bergdahl and ISIS as the JV team would be insane. I would say one thing about the Bergdahl thing. I read an account of what he was under, what happened to him while in captivity. I will say this, as a human being, when I read that, I'm not saying what the administration did was right bringing him home, I felt like I would want that kid home.

Dagen McDowell: A lack of trust how the white house acted in these two scenarios dealing with the most untrustworthy of nations. We are talking about Iran. I think, and this is me guessing, I think a lot of this behavior by the white house and the people there is that it's the, let me be clear. The president said that. You don't need to know. We are smart. We are making the decisions. We are going to do this on our own whether you like it or not. If we decide to tell you after the facts, we will do that.

NEW QUESTIONS FOR TRAVELERS IN WAKE OF GERMANWINGS CRASH

Dagen McDowell : I'm not worried about the impact on the airline industry at all. This would never have happened on a U.S. Airline. U.S. Airlines had in place safety procedures where there was never one single person in a cockpit. There were always two people on the aircraft staff of the airline in that cockpit. I don't worry about this. As tragic as it is, i don't believe -- they are already moving to implement the same safety procedures on overseas airlines.

Adam Lashinsky: Obviously, this is just a horrible, horrible tragedy. It spooks those of us who fly a lot. I took a perverse pleasure knowing this is the work of some nut job because if some nut job wants to crash an airplane, they are going to. It's very, very low probability. This just reinforces how safe flying is.

Charlie Gasparino: We now look at people like the shoe bomber or underwear bomber. You actually do look at who is sitting next to you now, whether you have to jump on top of them and take them down. I'm going to agree with Adam on this. I think as long as this is a really mentally disturbed guy that did not show outward signs of it.

Charles Payne: Sometimes these nut jobs set off other nut jobs. We had a couple of incidents in Asia. If something were to happen in the immediate future, could it have a detrimental impact on the airline industry? This weekend is about high crude off prices.

Charles Payne : There has been a big movement for a decade to get fell loans the right to vote and this is part of the process of chipping away at it. Earlier this week, Jesse Jackson, Jr. they moved him out of prison into a halfway house and he talked about the felonization of black men. A lot of people have been asleep on this thing and I wouldn't be surprised if there's executive action.

Dagen Mcdowell: There has been a movement among companies and states and even localities -- it's called ban the box. You can't ask at the very beginning of a job interview, check, check this box if you have a criminal record. They're trying to keep the door open for people

Charlie Gasparino: You can check public sources you can't check -- for example, my panty raid at the University of Missouri where I got arrested for trespassing.