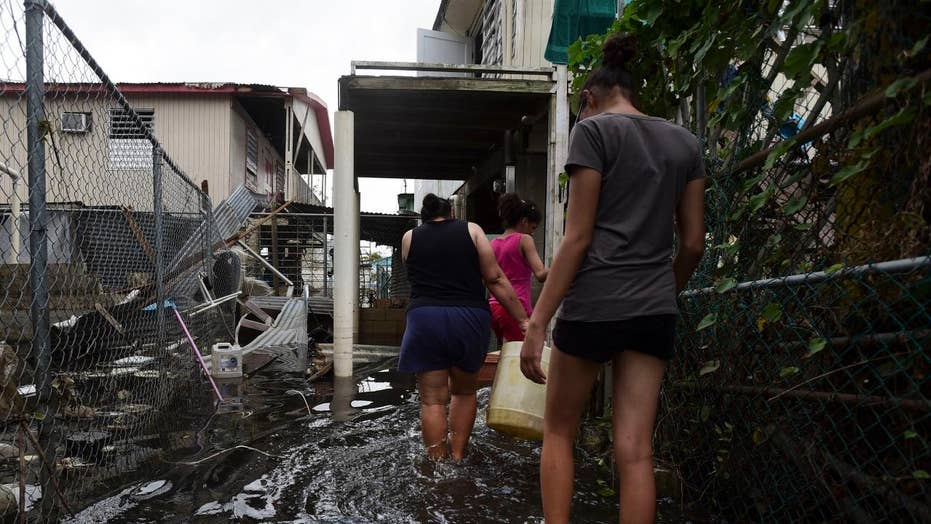 Governor Rossello provides insight about hurricane recovery on 'Your World.'

This is a rush transcript from "Your World," September 28, 2017. This copy may not be in its final form and may be updated.

SARAH HUCKABEE SANDERS, WHITE HOUSE PRESS SECRETARY: I believe one person is in charge of different parts of the process. The governor is still the governor of Puerto Rico. We're continuing to work with him, be in constant contact.

And we have one person in charge of the federal component of that. And that would the one-star general around working with state officials.

NEIL CAVUTO, HOST: So, help isn't only on the way for Puerto Rico. It's already there. And more is coming.

With us now, Puerto Rico Governor Ricardo Rossello, who joins us from San Juan on the phone.

Governor, good to have you. How are you doing?

GOV. RICARDO ROSSELLO, PUERTO RICO: I'm doing as well as I can, Neil.

Hopeful that we can plow through and, with this united front, a big team that we have with the local government and the federal government, get out of the emergency and start rebuilding Puerto Rico.

CAVUTO: Governor, we are getting different reports from different folks.

You are right there. Has the American response been satisfactory to you?

ROSSELLO: Yes, it has, Neil.

And I want to clarify these two points that sometimes seem contradictory. Number one, we do need more aid. But the president and the administration have done everything that they can, that we have asked them to do.

And we have gotten those results. The fact of the matter is that Puerto Rico is an island. And a lot of the things need to be flown in or brought in boats. And that takes some time. The air traffic control is a little bit congested.

And we have assets on the ground. We have food. We have water. We have distributed them with FEMA. We have opened 11 regional centers that distribute food, water, over two million liters of water, over a million portions of food that have been delivered so that people can have access to those.

Fuel is beginning to pick up, although it's been our biggest challenge to be able to complete the logistic pathway to distribute fuel. So, the reality is that administration and the president, every time that we have spoken, I have had an ask. They have delivered.

So much so that this morning, I have -- well, late last night, I asked for a waiver on the Jones Act. And late this morning, the president accepted that waiver.

CAVUTO: In the meantime, the president is planning to come to Puerto Rico, I believe next Tuesday, Governor.

Are you OK with that? Even Press Secretary Sanders had indicated that if he felt and they felt that his presence was in the way or too disruptive, they could push back. But what are your thoughts on that?

ROSSELLO: I think it's great for the morale for the people of Puerto Rico and, quite frankly, the whole of the federal government that is here.

And for every federal employee and every government employee, it's another boost, knowing that the chief executive is over here on the island, overseeing the response.

CAVUTO: Now, Governor, I don't know whether this reached your level, so I apologize if I'm getting in the financial weeds, but a group that controls a couple of billion dollars worth in loans, debt to your country -- I should say debt to your country -- they want to transfer that into a loan, charge you 6 percent, and that could be used as hurricane relief.

ROSSELLO: Well, listen, right now, we have had a clear ask for Congress, because the paradigm that we had in Puerto Rico prior to the storm was very different.

But the reality, Neil, is that the game has changed after this terrible catastrophe. And now we're going to need different resources so that we can rebuild and actually stabilize government.

So, what we have asked Congress -- and I'm sure they will -- and I'm confident that they will deliver -- I have heard the solidarity and the response from a bipartisan effort -- is that we need to have whatever the amount of this imbursement that is given to Puerto Rico needs to be consistent with the damage.

Number two, it needs to flexible, at least in the onset, so that we can attend to the fiscal reality of Puerto Rico.

CAVUTO: So, this is something that would be congressional aid, governmental aid. But this deal that is being offered now from some bondholders, it doesn't sound like you're jumping at that or see any reason to.

ROSSELLO: No, because I think part of the deal in Congress needs to include some lines of credit from the Fed and from the Treasury, so that Puerto Rico can access those lines of credit, and at reasonable rates.

CAVUTO: Do you think these bondholders are taking advantage of your crisis?

ROSSELLO: Well, I'm -- I haven't really considered that, Neil, at this juncture.

But I don't think it's the pathway to go. I think we need to work right now with the federal government. And we need to focus the emergency...

CAVUTO: That's fine. So, your message to them is, thanks but no thanks.

ROSSELLO: At this juncture, that's correct.

Governor, thank you very, very much. I know you are dealing with a great deal. Be well. Be strong. I'm sure your people will get through this.

CAVUTO: All right, the governor of Puerto Rico again still interested and very eager to host the president of the United States, who has promised next Tuesday to visit Puerto Rico and provide any resources that U.S. commonwealth needs.