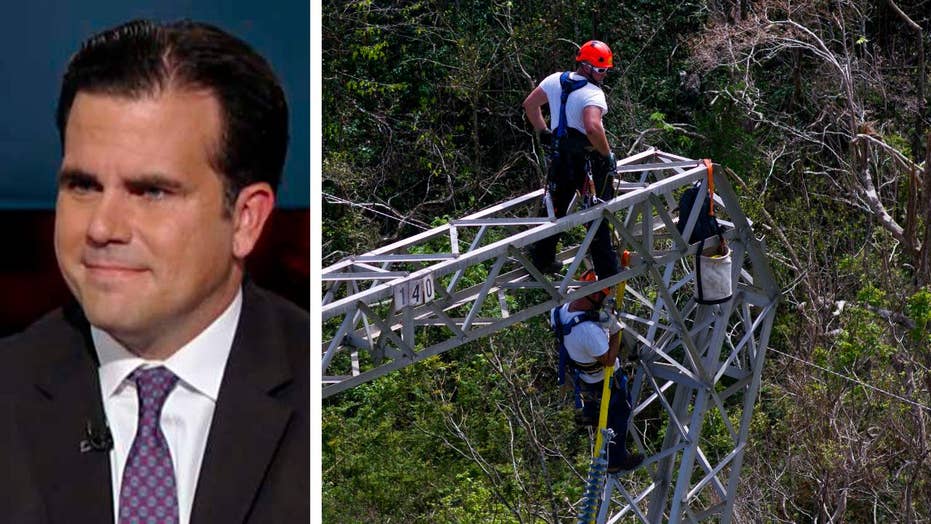 Puerto Rico governor on efforts to restore power to island

NEIL CAVUTO, "YOUR WORLD" HOST: All right, Puerto Rico Governor Ricardo Rossello has been criticizing the Army Corps of Engineers over the lack of action on the power grid.

The Army Corps of Engineers, meanwhile, saying that local officials have not really accepted their help and actually tried to block that help.

We thought we would get the read from the Puerto Rico governor himself. Ricardo Rossello is here.

Good to see you, sir.

GOV. RICARDO ROSSELLO, PUERTO RICO: Good to see you, Neil. Thank you for the opportunity.

CAVUTO: The back and forth goes on. I don't know who to believe here. But you're saying what?

ROSSELLO: Well, this is very simple.

It's been 35 days since we signed that agreement, Neil, and still no action has been taken. So that's why we say they're...

ROSSELLO: How is their our fault?

CAVUTO: But how can the Corps of Engineers just come in and fix something that was in bad shape to begin with?

ROSSELLO: Well, because that's the mission statement that they agreed upon.

It's not fixing, putting it new. It's putting it back up. The question...

CAVUTO: But it was in bad shape to begin with, they're saying, right?

But the issue is, when are the boots going to be on the ground? We're talking about 35 days. Neil, can you imagine another jurisdiction in the United States where you sign an agreement, and 35 days afterwards, there still is not boots on the ground to pick up electricity?

I challenge anybody to let me know.

CAVUTO: Is the issue getting access there? Regardless of who and what is to blame for this, Governor, is -- I'm told that even for ships that want to get in and help out, just getting stuff off of those ships and to areas that need the help is infrastructurally impossible.

Is that still the case?

ROSSELLO: No, it's not infrastructurally impossible.

And we already have some materials on land. It's true we still need to get more materials, but there's a lot of work to be done. And with the materials at hand, if we get those brigades, we can do a lot of progress.

Look, it's a matter of execution. It's a matter of getting boots on the ground. And what we're asking is, very simply, number one, to increase the sense of urgency. And, number two, because I haven't seen that sense of urgency, I have spoken to both the governor of New York and the governor of Florida. And we're working mutual aid to get brigades into Puerto Rico, so that we can get our energy grid back up.

I'm curious whether you are now beginning to share the same grief your mayor in San Juan has had. She's been very, very critical of the president and lately now of Republicans in general, that they don't care, that they're not really paying attention to Puerto Rico.

Well, I -- you know, in an event of a disaster, you need to keep politics aside. So, whenever I have seen things that are good -- and I have been on this program and I have said it -- I call them.

And whenever I see things that are not working...

CAVUTO: You call who? The president?

ROSSELLO: No, I call it out.

So, for example, I have talked about the role that Department of Defense has played in Puerto Rico, which has been great. It's been phenomenal. However, the Corps of Engineers, by the same token, have failed up to this point in their mission.

So, my role, as a governor, is, number one, keep politics aside from it. People that will criticize because of political context are -- it really doesn't help anybody. And, number two...

CAVUTO: So, do you think the San Juan -- it did done more harm than good? Or what are your thoughts?

ROSSELLO: Well, the San Juan mayor can do whatever she wants. I will do what I think is best for the people of Puerto Rico.

CAVUTO: But you both have to be kind in synch, right?

ROSSELLO: Well, she represents -- in terms of the response, yes, it's important for us to work together. And I have always had that open...

CAVUTO: Do you work together? It seems like you're both at opposite ends.

ROSSELLO: Well, unfortunately, the communication has not been the best.

But, in our position, we have always been open to work with her, so that we can address our constituents. It's the same constituents. So, again, politics shouldn't be anywhere in the arena of disaster.

CAVUTO: Governor, what is your relationship, and how do you think President Trump specifically has done?

ROSSELLO: Well, I have said the president has responded to our petitions.

We have been very clear with that. He has set historic meetings in the White House, so that we can move the agenda forward. But, at the same time-- so, he's responded to all of our petitions.

However, this is a long haul forward. And my job, as governor, is to make sure that that commitment is evident, it continues on, and that, in this recovery process and rebuilding process, we get the full support.

So, the president has stated that he will give support. We believe him on that as well, as other governors and congressmen and congresswomen that have stated the same.

CAVUTO: Is it fair say that all that debt that you have, close to $80 billion, that's held back for a while? There's no way you can pay that.

ROSSELLO: Well, listen, this is one of the main, major disasters in the history of the United States.

I think we need to start talking about it in those contexts, about what we need to rebuild, about the reality change that occurred in Puerto Rico. So...

CAVUTO: But I do remember the president, speaking extemporaneously, maybe a little bit too quickly, saying maybe the guys on Wall Street have to realize that just drop that, forget that.

ROSSELLO: That's the president's observation. We're on a Title III...

CAVUTO: Do you agree with that?

ROSSELLO: Well, we're on a Title III process, which is a judicial proceeding right now, where there's negotiation, and the restructuring is ongoing.

ROSSELLO: So, I'm not commenting on that restructuring side of things.

CAVUTO: All right, I know you have a very busy schedule.

Governor, we very much appreciate your taking the time.

ROSSELLO: Thank you. Thank you, Neil.

CAVUTO: It's such a beautiful country. Hopefully, you will rebound.

CAVUTO: I have a feeling -- indeed, you're right, U.S. citizens.

CAVUTO: I love the rain forest, too. Climbed many a steps in that rain forest -- not well. All right.