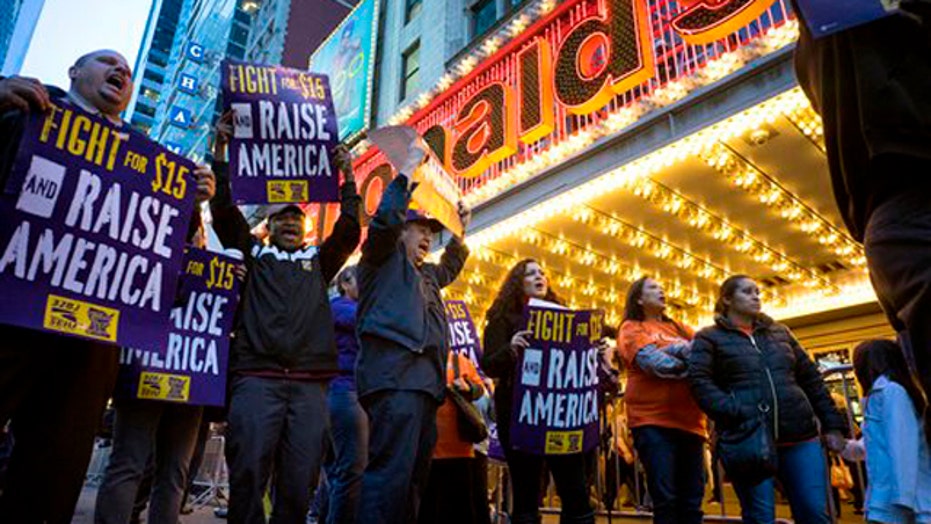 Protesters calling for $15/hour wages across the country

Union-backed Protesters Calling for $15/Hour Wage Across the Country

Ashley Pratte: The unions do not care at all about raising the minimum wage for workers. They tried to make this look like an organic effort but in reality the SEIU has funneled over 50 million dollars into non profit front groups, but if you saw these protests, what you saw was college students being paid to protest as fast food workers. Why is it that this union back issue is going on when workers aren't advocating for it?

Gary B. Smith: It is actually very clever on the part of unions. They are looking altruistic but what they are really doing is looking out for their membership. Most union member aren't paid minimum wage. When you wage minimum wage for nonunion workers you are raising the bar. You are knocking them out of the market place. The more they demand the more the union make. The $15 dollar an hour is a Trojan horse

Emily Tisch Sussman : The reason these protests look diverse is because they are diverse. The reason this blew up is because people are saying that minimum wage is not enough for them to live on. There is a recovery and they are not feeling it. That is why there is such a broad coalition around it.

Jonas Max Ferris: I side with Emily. I believe the Unions jumped onto this populist movement to get the brand benefit. They have taken a lot of hits in recent years and they are trying to get their reputation, back by latching onto a group with bad benefits. I will say it can be dangerous for the union, why work for a union if you are making $30 for flipping a hamburger. It's a defeatist strategy for unions.

John Layfield: They have been dying for years and they are pressuring McDonalds and Walmart to unionize. It's about survival. This is nothing to do with Minimum wage, it's about increasing membership. Why $15? Because it sounds good. Unions do not want a permanent fix to minimum wage. It would kill membership. Unions are dying and they are using this as a tool to recruit.

Gary B. Smith: Sanctions are the modern day smart bomb. The economy is about 20% smaller, unemployment is around 20%, inflation is about 25%. These are horrific numbers, depression like numbers. The only thing that can happen is if the young people rise up and incite a regime change.

Emily Tisch Sussman: I think a really positive thing that has come out of this is that there has been a lot of cooperation in congress. I think the best thing coming out of this is the normal order of congress.

John Layfield: They have no negotiation power; they need to come to the table. 70% of Iranians are under 30 years old. They are ripe for revolution. Of course they want a deal with president Obama and John Kerry, they have been out-negotiated by everyone they have sat down with. There is absolutely no reason to raise these sanctions. We are going to make them the richest country in the mid-east if we raise these sanctions.

Jonas Max Ferris: Other countries ripe for revolution? Cuba and North Korea. When we create the problem it can be blamed on us by the regime. We are giving their leasers an easy out. Not to mention, if we had tariffs instead of sanctions , we would be making money and not the Russians selling missiles to Iran. That rightfully should be Americans. And we will have to deal with the military later on.

Ashley Pratte: The sanctions are why we are there in the first place. And if we keep negotiating we go away, we will lose. A non- nuclear Iran should be the goal and if that means slapping more sanction on Iran that is what needs to be done.

ICE Director Under Fire Over Release of Criminal Illegal Immigrants

John Layfield: This person should be fired. 25% of the people released committed level one crimes, murder rape, these are people committing crimes against society and they are being put back in society. Ship them back.

Emily Tisch Sussman: No one can defend letting level one offenders off but that means 75% of them committed traffic offenses like a broken tail light. They need to get back to comprehensive immigration reform.

Gary B. Smith: The one thing I think the government should do is protect us inside and outside out borders. Someone should be accountable and no one is, it is incredible

Jonas Max Ferris: If we send them back and they come back, what good is that? If it costs more to put someone in prison than to use of services, it's not worth it. Prison is almost never the best solution