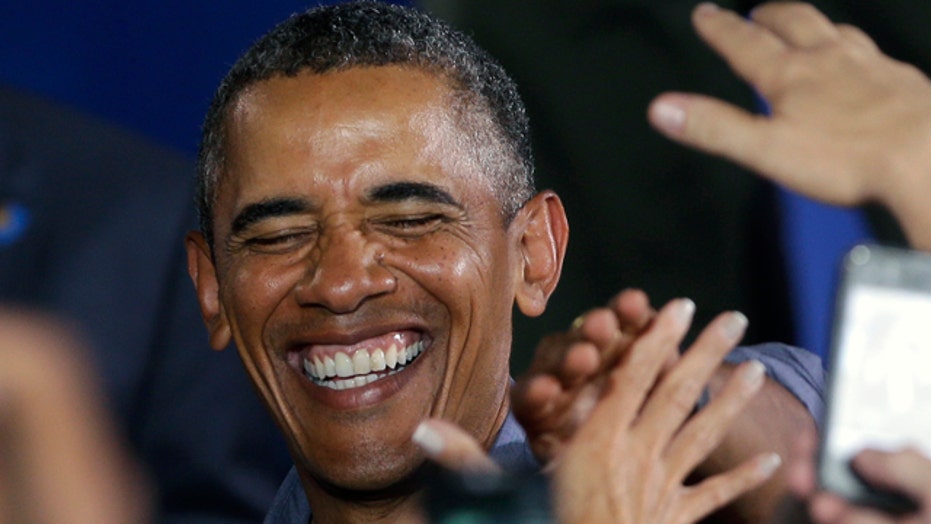 Report: Americans backing Obama the most are hurting the most financially

REPORT: AMERICANS SUPPORTING PRESIDENT OBAMA THE MOST ARE HURTING THE MOST financially

JOHN TAMNY: What's interesting about this is that you naturally must blame the Obama administration. Economies on their own always grow, and they grow because we individuals have infinite wants and we get up for work every day to fulfill those wants. The only times economies are slow for extended periods are when governments are putting up barriers to our natural ability to work. ObamaCare inhibits hiring. The government spending starves businesses of capital. A week dollar drives away investors. The bad news is that's what's keeping the economy down. The good news is if we reverse those qualities the economy will soar again.

RICK UNGAR: What I like to say about this is it takes two to tango. I'm not going to sit here and tell you that the policies are working. The numbers you quote are accurate. Things are not good for those people. But the President cannot do this on his own. I want to read you something. One of our colleagues who we've had on this show, Dan Mitchell, a libertarian scholar from the CATO Institute wrote that he doesn't believe that Obama deserves the full blame. He says it started before he got there. He deserves part of the blame, not all of the blame. But what about Congress?

ELIZABETH MACDONALD: The ministry of white-wash is in full overdrive right now, and the crank precincts of the far-left ideologues, who are basically misleading the general public-look at the federal reserve districts reporting in: Atlanta, Chicago, Richmond, Philadelphia-they are hearing from companies citing health reform is hurting them. They are hurting their job prospects at these companies. Goldman Sachs is seeing is, MERSA is seeing it-even Richard Trumka at the AFL-CIO just this past week saying it is creating a part-time nation. A record 28 million people now are part-time.

MORGAN BRENNAN: Look at the polls. We've seen in these very same demographics that his popularity has actually gone down in the past couple of months, and I think that's in large part because these policies haven't been working. To be more precise, we haven't seen a lot of policies, and to Rick's point, a lot of that is because congress has been striking stuff down. One of the policies that President Obama was looking to push through was an infrastructure bill, and that would have created construction jobs. When you look at some of the most vulnerable demographics of American workers it's focus that lost their construction jobs. These are the folks that voted for Obama.

MIKE OZANIAN: President Obama should look at JFK as his model. JFK was a defense hawk but he also cut marginal tax rates, which really helped get the economy going. Where the President doesn't get it, where his policies are wrong, is that he views the economy as a zero-sum game, which is if one person does well, somebody else is doing badly. That's not the case. A large amount of government spending, Obama's huge tax increase, and big regulations like ObamaCare have killed incentives for businesses to invest, which is why if you look at the total number of people employed in this country as well as those looking for work, we're at the lowest level in 35 years.

SABRINA SCHAEFFER: I hope that the 65 percent of women who supported President Obama last November are paying attention right now because the fact is that overall the unemployment for omen is around 6.5 percent. For African American women it's 10.5 percent. Hispanic women 9 percent. These are very bleak numbers. The fact is policies like workplace regulations like Lilly Ledbetter Fair Pay Act-these do hurt women. They make it more expensive to hire women. They make it harder to get part-time work. They make it less flexible in the work place. ObamaCare-we've talked all about negotiating specific benefits for women, but what about the cost to the pocket book at home, to the economy at large, and to our freedoms. None of his is discussed in terms of how this actually hurts women and their families.

SABRINA SCHAEFFER: There's nothing inherently wrong with the green agenda, as long as the market is determining a need for it, rather than government pushing taxpayers to support unproven or premature technology. One of the problems that we've seen with examples like this fire is that a lot of times there are unintended consequences of these kinds of projects. I think of the fuel efficiency standards, which have led to the car industry creating lighter to meet these new standards. Many times these cars are much more dangerous than regular cars. So a lot of times there's unintended consequences that the government has not considered.

MORGAN BRENNAN: I think we need to be spending on solar projects if we want to compete with China, for example, on the world stage in this arena. I think this isn't indicative of green wasteful money. I think it's much more indicative of the fact that when you have a new technology come in it's going to have blowback, no matter what the technology is. This is indicative that people in New Jersey and around the country need to sit down and figure out fire codes and new building regulations. And actually we're seeing this in other areas, too-Europe, England.

ELIZABETH MACDONALD: They are inherently fire-trapped. We're talking about an out-of-control chemical fire. Basically because of the batteries there the firefighters face electric shock because it's really hard to put out the energy.

RICK UNGAR: This is one of the great stretches we've ever had. This is like saying when we put electricity into homes all those years ago-- you know what, it created more danger for firemen.

MIKE OZANIAN: I think when the government gets involved in basic research I think that's fine; that's generally a good thing. But the government shouldn't be involved beyond that, when it gets to marketing and innovation, and actually dictating where people and companies have to spend money to buy products. I think that's where we get into trouble.

JOHN TAMNY: I'm going to disagree with Mike. The government should not be a venture capitalist ever. It's a simple truth: if you have a clue about how to invest, you don't work in government. You make money in the private sector. And it goes back to your earlier point: who do you trust to allocate capitol-- Paul Tudor Jones, John Paulson and Warren Buffett? Or John Boehner, Harry Reid and Barack Obama. I think the question answers itself. When they invest even a dollar they waste our money.

JOHN TAMNY: This is nonsense. It's historically ignorant. I'm from "Generation X", and they said about my generation in the early 90s that we were goatee-rubbing slackers who would never get beyond folding shirts at the Gap and living with our parents, whose achievements we would never out-do. But within a few years, and good government policies from both sides where they got out of the way, Generation X became the richest generation in the history of the richest nation on earth. Generation Y is not unambitious. It simply has too many barriers in its way. When those are removed it will soar.

SABRINA SCHAEFFER: I'm not too concerned about the policies so much as technology. I think that a lot of young people don't realize how good they have it. The fact is if you want to be a writer today, set up a blog. If you want to be a journalist, get a camera and a computer and yo9u can have thousands and thousands of viewers. The fact is there's a sense that if you went to a good college and had a good GPA all of this should just be handed to you, and people seem to have forgotten that no one really cares about your transcript. Get to work and show us how good you really are.

ELIZABETH MACDONALD: No entitlement in Generation Y. And by the way, is John Tamny really a Gen X? I think he's a boomer.

MORGAN BRENNAN: I think we're getting an unfair rap. I agree it's generational gibberish. And let's not forget the baby boomers were the hippy generation, as well, so there's a lot to be said there. But actually, if you look millennial group we have one of the highest unemployment rates. We are the only group, according to the Labor Department, that has seen the average income drop from 2000 to 2013. I think there's a lot going on here and it's not entitlement.

RICK UNGAR: This is an old geezer topic. When I was a boy I used to walk 14 miles to school in the snow without shoes on glass. It's silly. These kids work hard.

INFORMER: STOCKS THAT PAY NO MATTER WHAT THE MARKET DOES