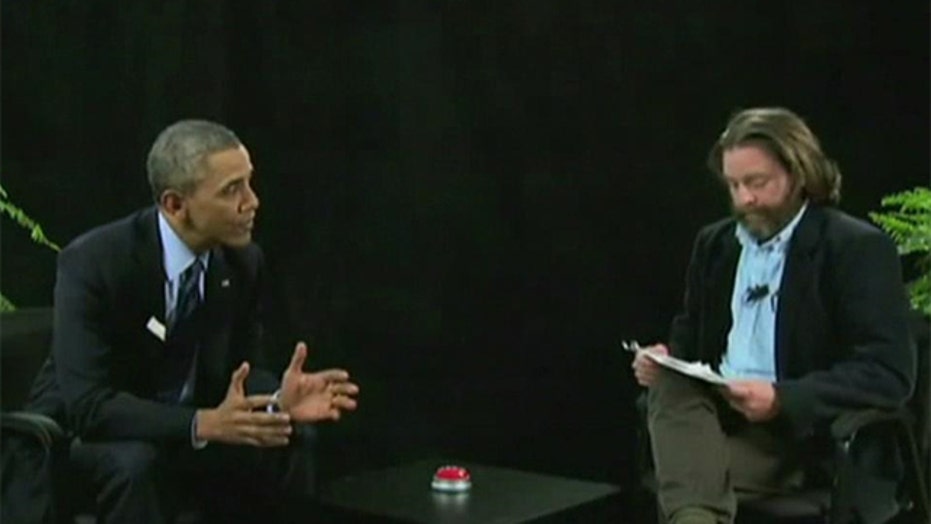 MICHELLE FIELDS: This is desperation. People don't want to sign up for ObamaCare because it's a bad deal for them. What the President should be focused on right now is dealing with the high unemployment that people are suffering from. He needs to create jobs, and instead he's acting like a salesman when he should be acting like a statesman and addressing these issues. What he's trying to sell us is one big, fat lemon, and he should be just trying to lead this country instead of trying to be an insurance salesman.

JONATHAN HOENIG: He's not a pitchman. He's not a viral video star. The President is not Joey Isuzu. To Michelle's point, he's supposed to be a leader, and it's pretty disturbing that he doesn't get that. People have lost their insurance, they've lost their jobs, lost hours at work, and Obama thinks it's hilarious, and to that extent he's really accelerating the march towards tyranny, because what he's promoting here is state-ism. That's what this entire sales job is about, is state-ism over healthcare.

JUAN WILLIAMS: I don't think there's any question that video got a tremendous response all linked directly to the website. So they got a huge push out of it, and it's amusing to me to hear you guys try to discourage young people from participating in this system. You've got 48 million people without insurance in this country. You have an opportunity here to really break through, do something good for our society. You guys are just naysayers. There's no question it's working.

WAYNE ROGERS: You have a choice, you could watch him on the golf course. He's pretty good there, too. I think the problem here is yes, you have a number of people that have watched the video-how many of them signed up? And then the real key question is of the ones who've signed up, how many of those are going to pay the premium? They don't have any idea yet.

JONATHAN HOENIG: (singing) People try to put us d-d-d-d-down. Eric, this has always existed. Teenage rebellion going back to the bikers, the punks, the ragers, the grungers, the emos. This is nothing new. Miley, and Lindsay, and Justin-they reflect the culture. I don't think they're a cause of it. What are kids today told by their parents, by schools, by politicians that America is not exceptional, that they should make their lives a sacrifice? If they do accomplish anything, they didn't build that. So I see Miley and Justin as victims of our culture, not causes of it.

JUAN WILLIAMS: I strongly disagree, especially in the minority community. You look at some of these folks, Beyonce's the one that's the target right now with this sex in the back of a limo video she's done. You look at people like Snoop Dog, 50 Cent-I could go on and on. These folks glorify bad behavior, and then say that they're just reflecting the reality of the streets. What they're saying is "oh yeah, it's okay to go to jail, to commit crime, to do drugs, have your babies' mommas and babies' daddies" is a dysfunctional, broken message to young people. I think that it's true the recession has made it harder for young people to get jobs, but I think there's no excuse for telling them that failure is acceptable.

WAYNE ROGERS: I'm kind of with Juan on this one, I believe the same thing. The real problem here is the fact that the media glorifies it. You think about the number of magazines that are devoted to exploiting the private lives of celebrities, as opposed to talking about the positive lives of people who are educators, or people who are scientists. So it's partially our fault, the media's fault, because we don't support this. We exploit it, and it's bad.

MICHELLE FIELDS: I'm not affected, but I think a lot of teens are affected. These are their role models, and what they're seeing is people like Justin Bieber-who's a punk-I mean he's doing reckless things, he takes absolutely no responsibility for that, and I think it's a shame that our media-I agree with the libertarian Juan on this one-that we're glorifying these people when we should really be glorifying our men and women who are in uniform standing up for our country fighting for our freedom and instead we're glorifying these idiots.

JUAN WILLIAMS: I love it. Isn't it nuts that the black box, which has the most information in the case of an airline crash-we can't get it because guess what? It's a thousand feet under the ocean, it's hidden in the jungle, it's all tied up in a wreck. That makes no sense whatsoever. We're in the modern age. We have a situation here where if you're a passenger on an airliner, you can get WIFI. Why can't they feed back the information? We've endured this mystery of what was going on with the Malaysian flight. We could have solved it a lot earlier if we had that information.

WAYNE ROGERS: You've got to weigh that against what we've spent so far trying to find this plane. You've got six or seven nations that have been involved in the search for the plane and all of that. That's an enormous amount of money. Weigh that against just the cost of doing it. And by the way, that will come down over a period of time. If it's done by satellite it's not so expensive.

JONATHAN HOENIG: Air travel is the safest form of travel there is. It's safer than biking, it's safer than automobiles, it's safer than trains. I don't think we should require airlines to put this type of technology on it. Government's role is not to tinker with aviation. They should be deregulating aviation. They should be focusing on addressing our enemies; that's the purpose of government: keeping us safe, protecting individual rights, destroying our enemies, not dictating how people should use the skies. That's for the private market.

MICHELLE FIELDS: Airlines don't look at it that way. There are 8,000 planes in the sky at any given moment in time. The amount of bandwidth that that would take in order to transit that data is just incredible. And it's not just the data and the bandwidth and the cost. There's also a concern about that data being intercepted by perhaps a terrorist. And like Jonathan said, this is the safest mode of transportation, and the government shouldn't be trying to mandate this. The government doesn't know how to protect your private property better than you, and better than a company.

WAYNE ROGERS: "Cash In" on media and entertainment with (ARRS)