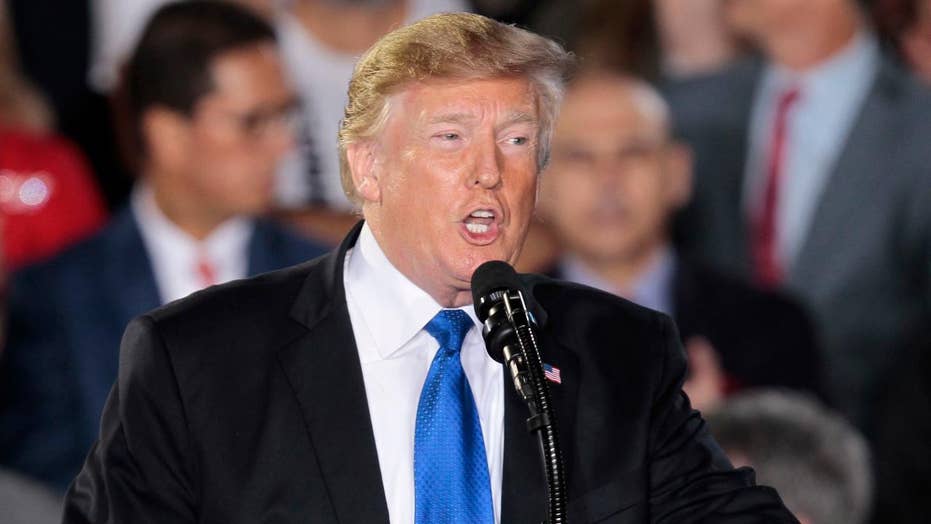 Trump says days of socialism under Maduro are numbered; reaction and analysis from the 'Special Report' All-Star panel.

This is a rush transcript from "Special Report with Bret Baier," February 18, 2019. This copy may not be in its final form and may be updated.

The twilight hour of socialism has arrived in our hemisphere.

TRUMP: And frankly, in many, many places around the world. The days of socialism and communism are numbered.

I ask every member of the Maduro regime -- end this nightmare of poverty, hunger, and death for your people. Let your people go.

BRET BAIER, ANCHOR: President Trump in Miami talking to the Venezuelan American community down there. Two fronts on this message, one being to change the regime in Venezuela and the disputed President Maduro, also get humanitarian aid flowing in there. But second, the message on socialism and how that also really transfers to the 2020 election to come.

CHRIS STIREWALT, FOX NEWS: That's right. And at the moment where Democrats and a lot of younger voters are reconsidering how they feel about socialism and is socialism OK, at the very moment where some prominent Democrats, including the second place finisher in 2016 for the Democrats, Bernie Sanders, embraces the label, this is very good for the president to be able to say, well, this is what socialism looks like. This is if you go to another country and see it in practice, what is being described, this is what it is. So it's very much on brand and it's very useful and probably a good thing to talk about in a swing state.

CHARLES LANE, WASHINGTON POST: A lot of Democrats actually support President Trump on policy toward Venezuela. It's true there's been a lot of attention on the usual Alexandria Ocasio-Cortez because she doesn't, but the local delegation from Florida, Donna Shalala, Debbie Wasserman Schultz, and so on, and there are a number of others in the Senate and House who for a rare occasion have actually seen eye to eye with the president on a matter of foreign policy.

And let's not forget, this Venezuelan community, which interacts very closely with Cuban-American community down there, is going to influence the 2020 elections in Florida. This is not just a question of making a negative statement about socialism. It is also, in terms of domestic politics, rallying the Latino community of south Florida on Donald Trump's side.

MOLLIE HEMINGWAY, THE FEDERALIST: It's also just a good reminder that the whole world is full of regions -- or the whole world has places of conflict, and that we need to be making sure that we are not involved in places where we are fighting wars of the past and looking at situations that are becoming a big problem in our own hemisphere.

BAIER: A lot of attention on "60 Minutes." The former deputy director of the FBI speaking out about the possibility of using the 25th Amendment to remove the president.

ANDREW MCCABE, FORMER DEPUTY FBI DIRECTOR: The discussion of the 25th Amendment was simply -- Rod raise the issue and discussed it with me in the context of thinking about how many other cabinet officials might support such an effort. I didn't have much to contribute, to be perfectly honest, in that conversation.

UNIDENTIFIED MALE: Rosenstein was actually openly talking about whether there was a majority of the cabinet who would vote to remove the president?

BAIER: So since then, there's been a little bit of a walk back from McCabe on that. Take a reaction from the White House, and Capitol Hill.

MERCEDES SCHLAPP, WHITE HOUSE STRATEGIC COMMUNICATIONS DIRECTOR: McCabe has no credibility. He was obviously fired by the FBI. We know he's lied on multiple occasions, including under oath, and he's a partisan hack. So he is trying to sell a book, but the mere fact is that he's a liar.

SEN. LINDSEY GRAHAM, R-S.C.: I promise your viewers the following, that we will have a hearing about who is telling the truth, what actually happened.

STIREWALT: Andrew McCabe is definitely -- he is formed in the shape of James Comey. He's like a pocket James Comey. It's the same idea. You have a guy who leaves essentially in disgrace, the type of guy who is not esteemed by either party. You have a guy who an inspector general's report found him to have lied to his colleagues at the FBI about leaking, and then he says, well, Comey said I could leak, and Comey said, I never said that. There are so many contradictions. There is so much wrong here.

And what is pretty obviously trying to do, as Comey did before him, addition is a resistance figure. He wants to be embraced by Democrats and liberals and say, I am part of this, I am with you now. It's not going to wash.

BAIER: Which is really the message out of the Justice Department, Mollie, the statement being the special counsel is appointed to ensure that the Russia investigation was truly independent and without bias, something that McCabe could not have accomplished.

HEMINGWAY: They are making that statement, though, because they understand that there is a bigger picture here. We had two alternative stories going on for the last couple of years. Either the president is a traitor who was compromised by Russia, or our DOJ and FBI acted horrifically poorly. The entire special counsel was set up under false pretenses, and you see just a repeated pattern of really bad behavior from people who were trusted to handle law enforcement and intelligence.

And I think, yes, Andrew McCabe is someone who was fired for lying about his many leaks to the media. And yes, you've had 20 other people who have been fired or resigned or quit under pressure because of their bad actions, too. At what point are we going to move away from his conspiracy theory that has no support for it of treasonous collusion with Russia to steal an election, and when are we actually going to deal with the major problems at the FBI and DOJ and the fact that a special counsel is set up by these people who were behaving in an absolutely reprehensible fashion?

BAIER: One way is to get the end of the Mueller investigation and to find out what the results are, right? And we will eventually. At one time, I don't know. Chuck?

LANE: I think That's all in the hands of Bill Barr, now. One of the most important aspects of a new attorney general's confirmation is that for the first time now we have sort of a full-fledged attorney general, full- fledged in the sense that he's not recused from the Russia investigation, full-fledged in the sense he's Senate confirmed and that he's experienced, widely regarded, even among Democrats, even though many of them voted against him, and fully empowered to deal with this. He also knows Bob Mueller very well. And I have to believe that he, too, understands, as you do, that this thing, sooner or later, it has to wind up, and something has to be made public out of it.

BAIER: We'll cover it no matter how it comes out.