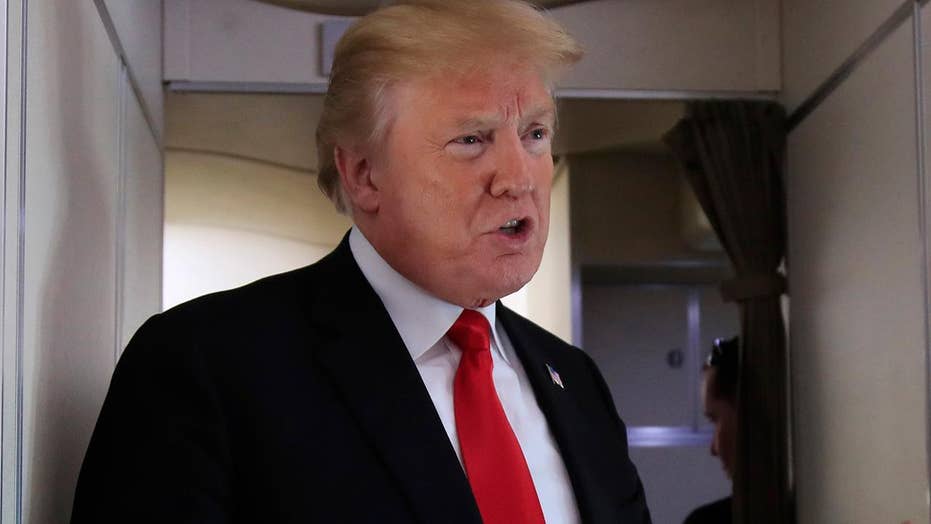 This is a rush transcript from "Special Report with Bret Baier," June 29, 2018. This copy may not be in its final form and may be updated.

PRESIDENT DONALD TRUMP: We will begin our search for a new justice of the United States Supreme Court. That will begin immediately. And hopefully we're going to pick somebody who will be as outstanding.

We have to pick a great one. We have to pick one that's going to be there for 40 years, 45 years. We need intellect. We need so many things. There's so many elements go into the making of a great justice of the Supreme Court. You've got to hit every one of them.

SHANNON BREAM, ANCHOR: Let's talk about it with our panel because we know when this is allegedly going to happen: Steve Hayes, editor in chief for The Weekly Standard; Mollie Hemingway, senior editor at The Federalist, and David Catanese, senior politics writer for U.S. News and World Report. Great to see all of you.

So, Steve, today he says July 9th is a week from Monday. We know because they have had this list for a long time. He has already interviewed some of these folks. But that's kind of like rocket docket material to pick a justice in a week and a half.

STEVE HAYES, THE WEEKLY STANDARD: I think they are working back from the fall. Mitch McConnell has made very clear that he wants this done, President Trump wants this done by October, justice seated by October conceivably. And I think it's a priority.

Mitch McConnell has been planning for this moment for years. He has been working with the White House for years. He has cleared much of the Senate schedule to address this and other judicial vacancies. We know that this is Mitch McConnell's top priority. It's something that he has been looking at doing going back before the election of Donald Trump. So I think Donald Trump is probably wise to move as quickly as he is going to move. And whatever Mitch McConnell can do to accelerate the Senate schedule he ought to do that, too.

BREAM: Not all senators are on board as we know. Senator Dianne Feinstein, the ranking member, Democrat, on the Senate Judiciary Committee which is going to have a lot to do with this, here is what she says about moving forward.

SEN. DIANNE FEINSTEIN, D-CALIF.: As you sow, so you reap. And I think we have a plan, and it will be announced by the Democratic leader at an appropriate time. But this is a very serious situation and no one should under estimate it.

BREAM: So Mollie, of course Democrats are pushing back you have to fill a seat in election year. You have to hold it open until after the election. You can't fill it. Mitch McConnell told me last night, we meant that in presidential election years. She says they have got a plan. I don't know what Democrats are planning to do.

MOLLIE HEMINGWAY, THE FEDERALIST: Mitch McConnell didn't just say that last night. He said that throughout 2016. And the question wasn't whether every election year is the same, but whether presidents should have the right to pick their nominee. So whether you think that what Mitch McConnell did in 2016 was a good idea or bad, he was very clear and explicitly clear and so were the people who supported his plan that that was about presidential election years.

Democrats are in a really tough place right now, though. There are Republicans who might go squishy on a nominee from Donald Trump, but you have a lot of Democrats who are running in states that Donald Trump won overwhelmingly who will have voters livid if they do not support any qualified candidate that Donald Trump puts forth.

BREAM: We think about the Joe Manchins of the world and others that we're watching. It's a very small list but it could be enough to make a difference. One of the big issues that was immediately jumped on by the left is this idea of Roe v. Wade. Justice Kennedy had been protective of abortion rights, that kind of thing, so replacing him, you say it's a Republican president replacing a Republican nominee but it could be very different in his case on these social issues.

I want to play something that now President Trump said during the debate in October of 2016 with our Chris Wallace when he was asked specifically about whether or not he'd look for someone to overturn Roe v. Wade or whether that would happen.

THEN-REPUBLICAN PRESIDENTIAL NOMINEE DONALD TRUMP: If we put another two or perhaps three justices on, that's really what's going to be -- that will happen. And that will happen automatically, in my opinion, because I am putting pro-life justices on the court. I will say this. It will go back to the states, and the states will then make a determination.

DAVID CATANESE, U.S. NEWS AND WORLD REPORT: So he actually said today I shouldn't say that. He was asked today at the gaggle, and he said I'm not going to ask these potential nominees about Roe versus Wade because now is he getting on script saying you don't want to be pinned down on that and have the nominee go in the hearing and be asked.

But look, this is going to be the Alamo of for the left. Just the statements coming out from the potential 2020 Democratic senators, whether it be Kamala Harris, Kristin Gillibrand, there is a feeling among Democrats that although Republicans had the power that Barack Obama and Democrats never fought hard enough for a Merrick Garland, and the left want to fight on this.

The Republicans have the votes. And I think eventually President Trump will get his nominee, but it is not going to be without a hellfire fight this fall from the left, because they are -- this is about Roe v. Wade. This is about choice. This is about everything. And I just think there is going to be a bigger fight than expected.

HEMINGWAY: Whether or not you are -- whether you are pro-choice or pro- life, it is widely regarded that Roe v. Wade is just really horribly reasoned legal decision. So the question isn't really about whether you support Roe v. Wade or not. Even people who are pro-choice recognize that it was a poorly argued judicial decision. But the question really will be about your approach to the law. Are you an originalist on questions of the Constitution? Are you a textualist on questions of the law. You don't need to ask about Roe v. Wade because, again, so many people regard it as a horribly reasoned --

BREAM: And we all know these nominees when they get in front of the Senate Judiciary Committee, if it is something really critical and difficult they are going to say I can't answer that that issue may be coming before me. So everybody is going to be combing through every comma in their record to see if they can find a clue for what they would do.

CATANESE: And just watch the two female senators, Lisa Murkowski from Alaska, Susan Collins. That's why you are going to see a lot of pressure on them. You will see Democrats, two Republicans, if they could peel them away and say no, I mean, their handling of this process is going to be very interesting because I don't know where they go. Do they decide to be that vote for a justice that could potentially overturn Roe v. Wade? There may be a lot of people that think it's poorly worded, but this is politics. And there is going to be a message from Democrats saying this court, this new Trump court with two new Supreme Court justices will overturn the right to abortion in at least 30 states.

BREAM: What you have to do is find someone who has never written a opinion on it or publicy answered a question on it.

HAYES: But even that, honestly, even that strikes me as optimistic. The conservation here is sanguine about the possibility of a fight over somebody's actual record and the things he or she has actually written. I don't think that's what's going to happen. I think Democrats we have seen already are so hysterical at the prospect of a conservative court that they're saying things that don't bear any resemblance to the truth. You have democratic or left leaning analysts making predictions about women's rights and where women are going to be and what they will have to do. It's just crazy. I think that's likely to be the tone throughout this.

And the debate, the real debate is going to be inside the Democratic Party. And it's not necessarily going to be about this position itself. It's all positioning, I think, for 2020.

BREAM: Well, and a lot of folks think that whomever is nominated and confirmed to the bench, it happens before the midterms as is the plan, it's only going to drive up the resistance and the Democrats to get out the polls in the midterms because they are not going to want to be on the wrong side of this again when it comes to them.