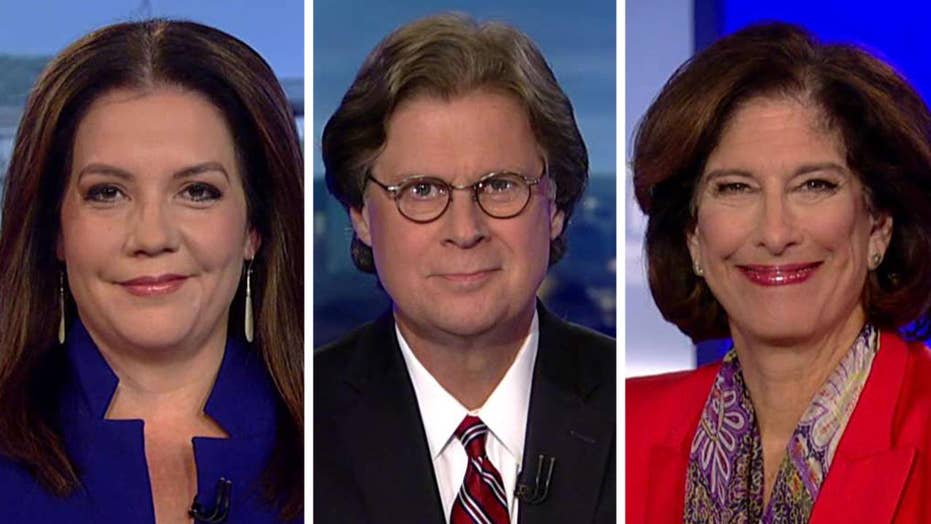 This is a rush transcript from "Special Report with Bret Baier," August 30, 2017. This copy may not be in its final form and may be updated.

PRESIDENT DONALD TRUMP: This is our once in a generation opportunity to deliver real tax reform for everyday hardworking Americans. And I am fully committed to working with Congress to get this job done. And I don't want to be disappointed by Congress. Do you understand me? Do you understand?

TRUMP: And your senator, Claire McCaskill, she must do this for you. And if she doesn't do it for you, you have to vote her out of office.

Here is the tax reform in a nutshell -- cut the number of income tax brackets to three with a top rate of 35 percent, lower the rates to 25 percent and 10 percent. The top rate right now is 39.6. Double the standard deduction that Americans can use to reduce their taxable income. You've got basically married couples, also individuals under the proposal would go down. Reduce the corporate tax rate, and this is a big one. The initial plan was to cut the rate from 35 percent to 15 percent. There is some talk about the 20s being the target, but he mentioned 15 percent today. Repeal the alternative minimum tax and the estate tax known as the "death tax." That's a big one. And end the 3.8 percent investment income that was imposed by ObamaCare. That's a nutshell. We will see what happens in Congress.

MARA LIASSON, NATIONAL PUBLIC RADIO: Well, President Trump sounded like he just couldn't wait to get to Election Day, but he's got a long way to go on tax reform before he gets to blame Claire McCaskill for the end of it.

Look, tax reform is an opportunity for Republicans finally to get all back on the same page with the president. But I think the big question, the nutshell that you just read isn't necessarily where Congress is. And the president is going to have to get his Republicans together. Remember the treasury secretary said this was going to be passed by August, and it hasn't been. And some members in Congress and tax-writing committee members have different ideas than the president about what those rates should be, what those corporate rates should be. He's got a long way to go. There are a lot of details that need to be fleshed in. But tax reform is something, or at least tax cuts is something that Republicans should be able to unite around.

BAIER: And frankly, Mollie, they need a "W."

MOLLIE HEMINGWAY, THE FEDERALIST: They do need a win. And the economy is something that has gone well for Donald Trump already. It is something that his treasury secretary said is his number one priority to get that economic growth back to three, four percent, where it certainly hasn't been and where it definitely wasn't during the Obama years.

In order to make that happen, you really do need to see some reform of corporate tax rates. And we have not had actual tax reform in more than 30 years. And when Ronald Reagan was able to accomplish that tax reform back in 1986, which was a broadly bipartisan effort, they lowered individual tax rates, some of which were as high as 70 percent, by having this increase in the corporate tax rates. And now we have corporate tax rates that are the highest in the developed world and they are really harming the ability of people to keep business here, return businesses here. So this is really something that should be broadly bipartisan again.

BAIER: The president mentioning that revision to three percent for GDP, touting that a number of times in his speech today. There's a poll in here, Byron, FOX poll five, Congress passing tax reform this year, is it important? Yes, 49 percent of those polled said it's important. No, 46 percent. Is it likely? And there is a little skepticism that this big piece of legislation is going to get through.

BYRON YORK, WASHINGTON EXAMINER: After ObamaCare, there would have to be skepticism. It was a disciplined speech, it was a focused speech. Trump stayed on script, which is always good news for him. And the most important point that he made was his second reason for his principles for tax reform which is to create more jobs at higher wages. Republicans are doing a lot of research on what they need to do to win next year, and it all boils down to more jobs at higher wages.

Trump picked a good place to go. He won Missouri by 19 points. He won really, really big there. That could create some pressure on Claire McCaskill. And they do realize they need to win. Mike Lee, the Republican senator, was on FOX Business this morning and he said, well, we were elected to repeal ObamaCare and reform taxes. We have already not repealed ObamaCare, and if we don't do this, quote, "We're dead."

BAIER: Ann Coulter, known conservative who was a big supporter of President Trump on Twitter as the speech is ongoing, "It's so obvious Trump is only getting polite applause for tax cuts. Want to get the crowd hollering. Talk about the wall. It is like the night of the living dead watching our beloved Donald Trump go to D.C. and start babbling the same old GOP nonsense on tax cuts. This is the worst, most tone-deaf speech real Donald Trump has ever given. Jeb had better ideas." So strong letter to follow.

HEMINGWAY: I'm sure Ann Coulter would be very excited to have a speech on the wall, but in fact most people care about the economy, and getting the economy humming was a big part of why Donald Trump won the election. A lot of people in the , theymedia care about this tweet that Donald Trump is giving or this thing he's saying, but actual people, they want to have economic growth. And we really didn't cover how sluggish the economy was for eight years. President Obama never had a single year with three percent growth. Last year it was 1.6 percent.

Yes we have a quarter, this most recent quarter was upgraded to three percent and projections are that the rest of the year will go well, but we really need to see sustained growth. And that is something that everybody cares about. When you actually look at the data, I don't think that many people care about -- the wall was obviously part of his bid too, but really this is a universal thing that everyone cares about no matter what party they're in.

SEN. DIANNE FEINSTEIN, D-CALIF.: You can't do a big bill. They can't do tax reform, in my view, just with Republicans. Look, this man is going to be president most likely for the rest of this term. I just hope he has the ability to learn and to change. And if he does, he can be a good president.

BAIER: Mara, was that a crack in the wall? She is in San Francisco saying that he could be a good president.

LIASSON: Yes. And she was saying if he can learn and change, she's open to working with him, as every member of Congress should be. That's totally reasonable.

But she also said right before that, she said tax reform is done with big bipartisan coalitions. That's what happened the last time. And if you want to do real tax reform, not just tax cuts, you're going to need some Democrats. And he needs to reach out to them, and he also has to make sure that there's a real middle-class tax cuts in there. And to the extent that Ann Coulter represents the Trump base, I think they are going to be a lot more excited if there are big middle-class tax cuts, not just corporate tax cuts.

LIASSON: And they had low expectations. That's always good.