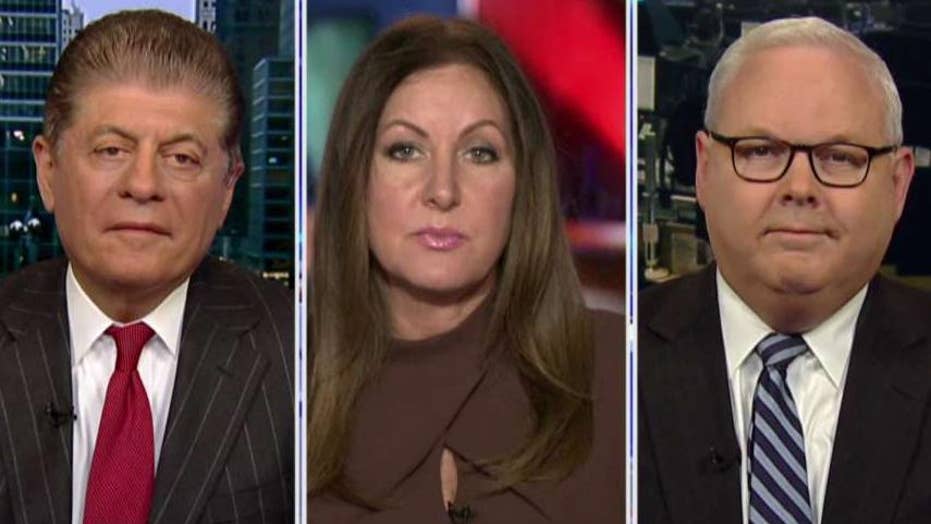 This is a rush transcript from "Special Report," March 28, 2019. This copy may not be in its final form and may be updated.

REP. BARBARA LEE, D-CALIF.: You have zeroed out Special Olympics once again. I still can't understand why you would go after disabled children in your budget. You zero that out. It's appalling.

REP. MARK POCAN, D-WIS.: What is it that we have a problem with, with children who are in special education. Why are we cutting all of these programs over and over within this budget?

UNIDENTIFIED FEMALE: This is about you prioritizing your agenda over students with special needs.

DONALD TRUMP, PRESIDENT: I heard about it this morning. I have overridden my people. We are funding the Special Olympics.

BRET BAIER, HOST: The education secretary, Betsy DeVos, spent a lot of time on Capitol Hill fielding some heat, as you saw, from lawmakers about the budget and Special Olympics funding. The president saying this afternoon he is overriding all of that.

That is where we will start. We'll bring in our panel, FOX News senior judicial analyst Judge Andrew Napolitano, Leslie Marshall, Democratic strategist, and Bill McGurn, Main Street columnist for "The Wall Street Journal." Bill, you have seen how the White House has worked with budgets, it is a very detailed process, any you put your people out to defend what's on the paper, and then it kind of shifts here today, late in the day.

WILLIAM MCGURN, CONTRIBUTOR: Right. I think President Trump was smart. This was a political blunder. But let's put it in the larger context. She was trying to cut the budget, which is very, very hard to do. And this was the private institution, it does tremendous work. So this is the way Washington behaves, it is very difficult to cut spending. And I think one of the Democrats on the committee pointed out their real issue with Betsy DeVos is not that she can't the spending for Special Olympics. It's that she has a different agenda, charter schools and so forth, than they do.

BAIER: The other thing, Leslie, is health care, a focus this week that kind of veered. a lot people wondered where it was coming from, but the Department of Justice not defending Obamacare, which is going to open up a whole bunch of doors for what comes next. Here is the president late this afternoon on that.

DONALD TRUMP, PRESIDENT: We put together a group of four or five, and Bill Cassidy is a terrific health care person, and they are going to work together and come up with something that is really spectacular. Maybe we'll even get support in the House from Democrats. But it is going to be far better than Obamacare. If we win on Obamacare, it will be terminated in the court. And we'll see what happens.

LESLIE MARSHALL, DEMOCRATIC STRATEGIST: I can tell you what is going to happen. Millions of people will be without health care, and many of those millions, a very good percentage of them, voted for the president and support the president, but they also support and like their Obamacare. In addition to that, Republicans have failed in the past, Bret, as you know, on more than two occasions with repeal and replace. So I guess I would say to Republicans and to the president, thank you for the extra vote come 2020. Even many Republicans are pushing back on the president putting this forth.

BAIER: Judge, it is daunting. They've been around this track before on health care, and whether the replace is actually there is the question. He says he has got these lawmakers ready to go. But it's not there yet.

When the Trump tax plan went through, they removed the tax aspect of this, so that which saved the Constitutionality of Obamacare is no longer in there. That is at least the theory of the trial court in Texas which I think will be upheld by the Fifth Circuit Court of Appeals in New Orleans. And then we are back before the Supreme Court. The very same statute, minus that which saved it in 2012, the tax.

BAIER:. Did you inform the president-elect at the time what you knew about how it was funded or who was behind it?

JAMES COMEY, FORMER FBI DIRECTOR: No, I did not.

BAIER: Did you inform him that Christopher Steele had been fired by the FBI?

BAIER: Or that he had lied?

COMEY: No. And I didn't know those things at the time, anyway.

BAIER: Or that it had be used at least in part to get this FISA application to spy on somebody in his campaign?

LESTER HOLT, JOURNALIST: You want this whole thing out?

COMEY: Oh, it has to, because the bedrock of the Department of Justice which Bill Barr loves and Bob Mueller loves and I love, is that people have faith and confidence that it is not part of a political tribe.

BAIER: So he is talking about the special counsel's report, wants the whole thing out. Your reaction, Judge?

NAPOLITANO: Jim Comey is indefensible. I know him, and when he was running the FBI, he was beloved by the rank and file agents. I can't say that that is my perception of the case any longer.

In terms of the entire report coming out, there are parts that the attorney general under the law cannot release. He cannot release grand jury testimony about people that weren't indicted. The president wasn't indicted. He can't release that which is classified as confidential secret or top secret. He isn't even supposed to release any ambivalence on the part of federal prosecutors about whether there is enough evidence under the law to indict, but that he has already tipped his hand on.

BAIER: Bill, we had Rush Limbaugh on the show earlier talking about the fallout of all of this. He was one of a few people saying the same things for really more than two years. But on this issue of whether the attorney general is somehow covering up, address this directly. Take a listen.

RUSH LIMBAUGH, RADIO TALK SHOW HOST: Pelosi and the rest want us to believe that Barr is lying and what is in this report, that there is evidence of collusion in this report. If that is true, what must they think of Barr? And where is Mueller saying, hey, wait a minute, Barr is lying about this. I found collusion, I found obstruction. It is in my report. Mueller isn't saying that.

MCGURN: Yes. Look, I have three things that I think are relevant to this. One is I want as much of this report as public as possible. Maybe it can't be all of it, but I think the American people should see most of it. Second, I also want all the other stuff out. I want the FISA warrant information, all the other stuff. Let's see the whole story about how the FBI behaved.

And third, you have to ask what kind of show was James Comey running. A lot of people around him had been replaced by Christopher Wray. And you have Andrew McCabe, possibly facing perjury charges for the I.G. reports. We also have a pending I.G. report on the FISA warrants and the leaks. So a lot more could come out. There is a U.S. attorney looking at it. The intimation is that he is going before a grand jury. I'm not sure the FBI is going to come out of that looking very good.

BAIER: Last thing, Leslie, to wrap up here. Do Democrats want to stay on this road and really hit this hard, or do they want to move on to health care and other things that they think they have good footing on?

MARSHALL: I think it depends which Democrat you ask. If you look at people like Speaker Pelosi and even Adam Schiff, even though a lot of people are angry with him lately, they have always been saying with regard to impeachment, which the report comes out, there's going to have to be a bombshell. We are going to have bipartisan support. There's been no bombshell, there would not be bipartisan support. And I even said a lot of the Democrat, myself included, don't think impeachment is the way to go. And that faction of the Democratic Party really doesn't want to proceed with investigation after investigation after investigation, although they do have a responsibility in Congress to have proper Congressional oversight of the executive branch, of the president, and I think they want enough investigations to dot those i's and cross those t's.

BAIER: Panel, thank you very much. When we come back, a big day. One of our all-time favorites would have loved this day.

BAIER: Finally tonight, it's opening day for America's favorite pastime, baseball. The Washington Nationals opened their season against the New York Mets this afternoon in D.C., but they could not get a win on their home field, losing 2-0. For me, though, the official start of Major League Baseball always reminds me of the late, great, Charles Krauthammer, a huge baseball fan who left the panel almost every home game to go see his beloved Nats.

CHARLES KRAUTHAMMER, SYNDICATED COLUMNIST: But, oh, the glory. With the White House on fire, the Congress in chaos, and the world going to hell in a handbasket, we need happy news like this. This is why God created baseball.