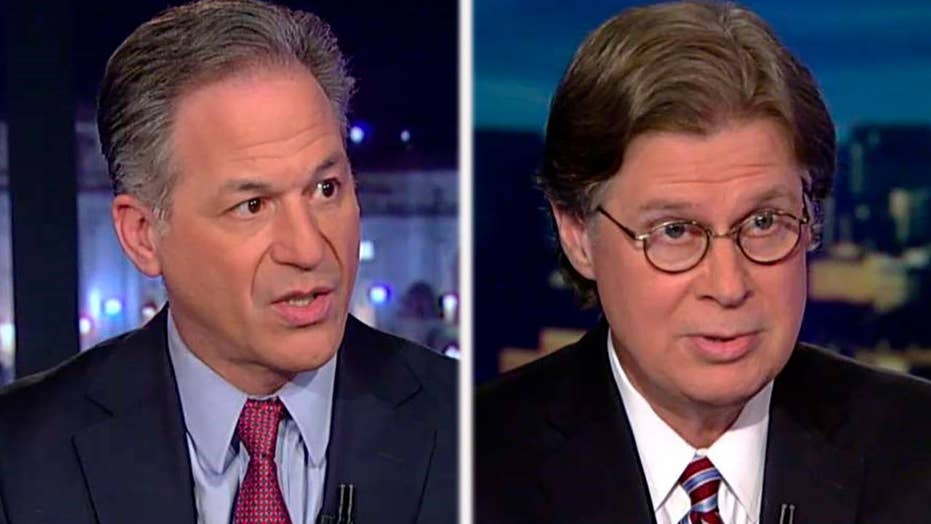 Trump promotes US economy with world leaders in Davos

This is a rush transcript from "Special Report with Bret Baier," January 26, 2018. This copy may not be in its final form and may be updated.

PRESIDENT DONALD TRUMP: America is open for business and we are competitive once again. I will always put America first, but America first does not mean America alone. When the United States grows, so does the world.

CHRIS WALLACE, ANCHOR: President Trump acting as salesman in chief at the World Economic Forum in Davos, Switzerland, today. Let's bring in out panel: Byron York of The Washington Examiner; Rachael Bade from Politico, and Charles Lane of The Washington Post.

Well, this was always an odd fit, the man preaching America first speaking at the World Economic Forum to maybe the greatest concentration of globalists in the world. Byron, how did the president do?

BYRON YORK, THE WASHINGTON EXAMINER: I thought he did a good job. I thought it was good speech. He did what he wanted to do, which was promote American business, promote his own economic record, which of course he wanted to talk about. I thought he had a memorable phrase saying America first does not mean America alone. And on the issue of trade, at some point some of the people there are going to have to accept that he does have a point about some things. An IMF official actually at Davos came out and said as far as China is concerned Trump is making a point that needs to be heard. So I thought that the trip to Davos, putting aside all of the other stuff back in Washington, was a success.

WALLACE: Let me pick up on what I think clearly is the most delicate subject at any meeting like the world economic forum. And that is trade, especially the same week that the president slapped tariffs on the import of solar panels and washing machines. Here's what the president had to say about trade.

TRUMP: We support free trade, but it needs to be fair and it needs to be reciprocal. The United States will no longer turn a blind eye to unfair economic practices.

WALLACE: Chuck, how did the president do on trade, and do you think he reassure a lot of those foreign leaders who were very concerned about protectionism?

CHARLES LANE, THE WASHINGTON POST: I think he did one thing that was important for his own cause which was to in a way come back after Xi Jinping went and sort of took the thing over last year and show the flag and speak in his own voice directly to these people and make the case for his own policies.

But like always when he says free but fair, people want to know the specifics, and there weren't a lot of specifics. What they have seen, as you mention, that there were a couple of punitive tariffs, admittedly very focused and temporary ones, which sent a certain signal. And then over here he's in the middle of this NAFTA renegotiation with Mexico and Canada. And I think the typical Davos response to that was probably something like, well, this is nice to hear but we're waiting to see what comes out of the talks in Montreal to see what really kind of flesh is going to be on the bones of this policy.

WALLACE: And it's interesting on TPP because the president who pulled out of the pacific trade partnership said when he was in Davos, well, I would be willing to come back in. But the 11 other nations have made a deal and they don't sound particularly anxious to have him back in any more than the Paris climate accord people.

LANE: They have already moved on, and that is yet another reason why the NAFTA piece is so important, because it's going to be his specifics, his answer, his model that will tell people what the U.S. alternative is.

WALLACE: As so often happens when the president is on a trip overseas, his visit was somewhat overshadowed by news here at home, especially this headline. Let's put it up right here, this was in today's New York Times, the report that the president ordered special counsel Robert Mueller be fired last June and only backed down when his top White House lawyer, Don McGahn, threatened to quit. Rachael, what has the reaction been on Capitol Hill to this story?

RACHAEL BADE, POLITICO: So the president called it fake news, but a lot of my sources, even Republicans sources on the Hill, do believe it's true just because there were so many reports back in June and people on the record saying he was actually thinking about this. But Republicans aren't actually not up in arms right now. That's because this happened seven months ago and ultimately, he did not fire Mueller and did not move against him.

WALLACE: Let me just interrupt for a second. Let's put up a picture because we actually have a little breaking news right now, and let's do it. There you see the gangway being brought up to Air Force One, the president has just landed at Andrews Air Force Base, or I guess I should say Joint Base Andrews, back from his trip to Davos. Made his speech there earlier today, and through the magic of that beautiful airplane, is back on American ground. Why don't we keep those pictures up and, Rachael, you keep talking?

BADE: Sure. Democrats have definitely taken this report, held it up, and said this is just the latest example of the president trying to obstruct justice. They're also bringing up the fact that the president asked Comey for a loyalty pledge and then fired him. So they say this is continuing in that vein.

But Republicans think that they have made the case to the White House that if he fires Mueller, his entire agenda is going to totally explode and they could actually lose their majority in Congress. And actually there are Democrats who, although they say this would be terrible, if the president were to fire Mueller they would probably be secretly excited because that means they would have a better chance in the election and winning in the midterms.

WALLACE: Byron, the special counsel reportedly was told about this incident, at least according to The New York Times, in his interviews with current and former White House officials. And that's one of the key things, we don't know what he's learned in all of these interviews with all these people that he's done for so many months now. But if this is true, does this help him build a case and does this help in terms of proving intent, which is very important, on the issue of obstruction of justice?

YORK: Well, the first thing it does is it does show you just how much this is moving toward the idea of obstruction of justice. He, you know, Don McGahn, the White House counsel, comes out as the hero in this case, the one who put his job on the line to make sure the president didn't go through with the self-destructive act.

But I think what we're going to end up seeing is the lawyers all say there is a case to be made for obstruction of justice. This would be one more piece in a number of pieces that would put together this case. But it's a political story. And as far as the president is concerned, it's really all about the House and the Senate. And we saw the president on the way to Davos when he just stuck his head in, this group of reporters, say, look, if you fight back they call it obstruction. And he is going to make a very political case that he was not suspected of any wrongdoing in terms of any sort of collusion and he simply tried to push back on this unjust investigation. It's a political case for him.

WALLACE: Let me pick up on that with you briefly, we've got about a minute left in this segment, Chuck, because that's his argument is I'm under attack, people are trying to delegitimize the election, and all I'm doing is punching back the way Donald Trump always has, and that this has nothing to do with obstruction of justice.

LANE: If it is a politics issue maybe we've got the perfect result which is politically through an election. And what I mean by that is possibly this Mueller charge, whatever it is, will come out in May or June. It's possible that he won't, indeed more than possible he won't indict but rather present it to the Congress to see if they want to do something about it. And then the Republicans and Democrats can have it out in the campaign over, well, do you want to elect a Democratic house to impeach this president? And that might be what the entire, or much of the campaign turns into.

WALLACE: Really, more than about the economy and the state of the country?

LANE: Well, the Democrats make it about Russia.

BADE: The Democrats want to, some want to make about it Russia, some want to focus on the economy. It's something they're currently actually bickering over.