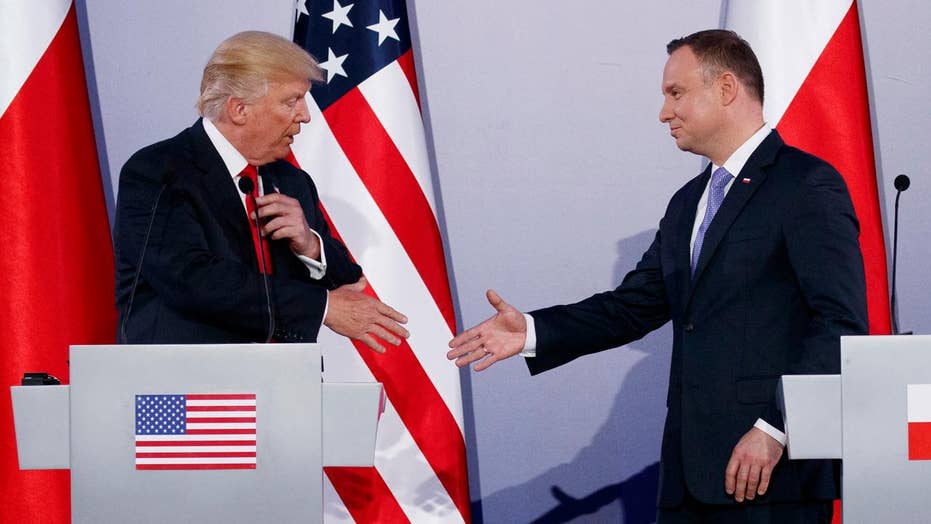 This is a rush transcript from "Special Report with Bret Baier," July 6, 2017. This copy may not be in its final form and may be updated.

PRESIDENT DONALD TRUMP: We welcome stronger ties of trade and commerce as you grow your economies, and we are committed to securing your access to alternate sources of energy so Poland and its neighbors are never again held hostage to a single supplier of energy. We urge Russia to seize its destabilizing activities in Ukraine and elsewhere and its support for hostile regimes, including Syria and Iran. The United States has demonstrated not merely with words but with its actions that we stand firmly behind Article Five.

BRET BAIER, ANCHOR: President Trump in Warsaw, Poland, delivering a speech about 37 minutes long to a lot of applause from the Polish crowd there. Lofty rhetoric, some pointed lines about Russia, and as you heard, a commitment to Article Five. Some pundits, mainstream media included, are calling it one of the best speeches of Trump's presidency so far.

What about this and his trip that will take him to President Putin tomorrow. Let's bring in our panel: Charles Hurt, political columnist for "The Washington Times," A.B. Stoddard, associate editor at "Real Clear Politics," and syndicated columnist Charles Krauthammer. OK, Charlie, there were a lot of lines in there that really struck a chord as far as painting a picture of a region that includes what's now called the Three Seas Initiative. These are all these countries that are surrounded by three seas as you take a look at the map, and trying to change the dynamic in that region, especially when it comes to energy and taking Russia out of the equation.

CHARLES HURT, POLITICAL COLUMNIST, "WASHINGTON TIMES": I thought it was a tremendous speech. I thought, as you pointed out, there were a lot of great Reagan-esque lines in it. It was a friendly audience. It's an audience that wants to love America, wants to turn to America for guidance, has turned to America for guidance in the past. And if you think about eight years ago, this is about when President Obama was beginning his what a lot of people derisively called his apology tour, going around the world sort of apologizing for America and making excuses for failings that he sees about America.

This speech was very different from that. It was more like a Reagan sounding speech where he talked about the shared ideals. He called Poland the soul of Europe, and I think there is definitely a new sheriff in town.

BAIER: And he used a lot of history in Poland and strife that they had to fight off the Nazis and the Soviets to, in their character, become a country again.

A.B. STODDARD, ASSOCIATE EDITOR, REAL CLEAR POLITICS: Right and they were very appreciative of that, the Polish government particularly. I think the speech was well designed and well written. But most importantly, obviously, was the reaffirmation of a commitment Article Five and some language about Russian aggression. That is going to momentarily calm the waters with our European allies, but -- and his pitch for American energy was good.

It's just the real background tension of all these meetings about the different direction trade is going in, these different new alliances on trade, the discord, that we'll call discord that Merkel described over the Paris accord, we think these meetings are going to result in things. They don't immediately, and I think that the impact of his America first new direction against multilateralism and against global trade deals is yet to be felt. And all eyes are really ultimately among our allies on the meeting tomorrow.

BAIER: It may be America first but it was Poland is pretty good, because take another listen to this speech.

TRUMP: We can have the largest economies and the most lethal weapons anywhere on earth, but if we do not have strong families and strong values, then we will be weak and we will not survive. If anyone forgets the critical importance of these things, let them come to one country that never has. Let them come to Poland.

BAIER: That has echoes of John F. Kennedy, actually, let them come to Berlin. Charles?

CHARLES KRAUTHAMMER, SYNDICATED COLUMNIST: I thought it was a great speech, and the contrast was not so much I think to the Obama apology tour. The contrast was to Trump's own inaugural address. This was a refutation root and branch of the ideas underlining the inaugural address, which was America first, the allies are parasites. We're now going to stick up for ourselves. There was none of that. It was the opposite. This was an ode to treaties and to alliances and even in some ways to trade. This is completely new.

And I thought the way he treated Polish history was amazing. Normally we harp on the depredations of the Nazis. Trump went out of his way to harp on the depredations of the Soviets both during the Second World War when they stood outside the gates of Warsaw and allowed it to be raised and destroyed by the Nazis in the uprising, and then heaping a program on how the Soviets treated Poland during the cold war. And then to top it off he talked about the monopoly of means, talking about the Russians. The use of monopoly and pressure in energy resources that's been going on, this was a very anti-Russian speech, very uncharacteristic of this president. And the only question the Poles have today is, will he mean it tomorrow?

BAIER: Tomorrow being the face-to-face meeting, Charlie, between President Trump and President Putin. This does set the stage for that, and I've heard all of these people saying he was just reading the speech. Presidents read speeches. It's their speech. And they OK them. And that's them. But it does set up the meeting.

HURT: Absolutely. And for all of the talk domestically, and I hate to even bring it up because I think the speech was on a much higher level than this, but for the talk domestically about whether Russia rigged the election or whatever, if they did, they didn't get what they wanted in this speech. That did not go as planned. Of course, I don't believe they did in the first place.

But the other thing that I think is interesting here is it was in America first speech, but it was the best incarnation of America first. It was about America in terms of the ideals that we all believe in, because we are a nation of ideas and radical ideas. And the reason Poland turns to the west and turns to America is because they have lived under the very dark opposite of those ideals. And so when you talk about America first, as Charles was saying, it is kind of Poland first, too, because we all share those ideals. And it was a great recitation of those ideals.

Guess what, he needs the Russians on the Chinese to help get us out of a crisis with North Korea. So at what point is he really going to be persuasive and be the leader of the free world again? He can get along with this country, have a new relationship with that country, but all eyes are on him trying to deescalate this really scary national security crisis. And people believe he doesn't have the right alliance, right allies on board. And that's going to be a big problem.