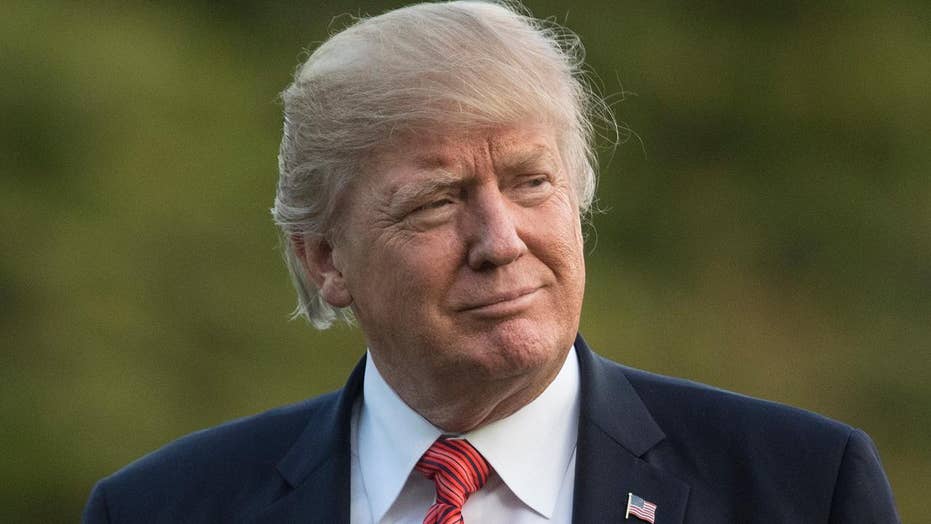 This is a rush transcript from "Special Report with Bret Baier," August 24, 2017. This copy may not be in its final form and may be updated.

UNIDENTIFIED FEMALE: Are you confident that you can influence the president?

SPEAKER OF THE HOUSE PAUL RYAN, R-WIS.: It's a day by day deal. I'm kind of joking.

SENATE MAJORITY LEADER MITCH MCCONNELL, R-KY: We understand who we represent, and I think this administration and this Congress is very oriented toward the folks that sent us there.

REP. SEAN DUFFY, R-WIS.: Donald Trump and Mitch McConnell and Paul Ryan have to figure out their differences and come out with a unified approach. Tweeting at people I don't think really accomplishes that goal.

SARAH HUCKABEE SANDERS, WHITE HOUSE PRESS SECRETARY: I think the relationships are fine. Certainly they are going to be some policy differences, but there are also a lot of shared goals and that's what we are focused on.

BRET BAIER, ANCHOR: Well, it was a busy morning on Twitter for the president as he was actively going after, essentially, some of the Republican members in leadership in Congress. This as a new poll that came out today by Quinnipiac, and this poll shows the approval of Congress. All voters, 10 percent. But here is the stunning number, GOP, voters 17 percent. The House and Senate are controlled by the GOP.

Here is the president's tweets. "I requested that Mitch M and Paul R tie the debt ceiling legislation into the popular V.A. bill which has just passed for easy approval. They didn't do it so now we have a big deal with Dems holding them up as usual on debt ceiling approval. Could have been so easy. Now a mess!" "The only problem I have with Mitch McConnell is that after hearing repeal and replace for seven years, he failed. That should never have happened!"

That sets the table for us. Let's bring in our panel: Michael Crowley, senior correspondent for Politico; Mercedes Schlapp, columnist for The Washington Times, and Tom Rogan, commentary writer for The Washington Examiner. OK, Michael, this is -- we are getting to Labor Day. They will come back and have to deal.

MICHAEL CROWLEY, POLITICO: Yes, but there's not a lot of time to do that dealing. The calendar is running out quick. There are a lot of big, substantial items that are backing up. And remember, any given week there's only couple legislative days. So September, sounds like there's plenty of time before the end of the year. There's really not. And there is this incredible dynamic unfolding that is much more reminiscent of a Congress and a president of different parties rather than the same parties.

And I think it might be a moment to pause and reflect that in some ways Donald Trump is not really a Republican. You know, he's pretty new to the party ranks. He was -- the party tried to reject him essentially as its nominee. And I think Republicans on the Hill are starting to see the fruits of that, that he will not hesitate to lash out against his own party if he thinks he's going to benefit him.

BAIER: Mercedes, when I put up polls, whatever the poll, I usually get all kinds of tweets and messages saying those are fake polls and don't believe those approval numbers. But I bet when I put up this poll, they will say, yes, that's right on, 17 percent from GOP voters about Congress.

MERCEDES SCHLAPP, THE WASHINGTON TIMES: Right. There's no question that the frustration amongst the grassroots is against this Republican establishment. It's against what they call the RINOs. And that is why Mitch McConnell and Paul Ryan are so unpopular not only with the Trump base but so many of these what we would say conservative grassroots, many who supported Donald Trump.

And they are incredibly frustrated by the fact that you have these GOP obstructionists in the Senate basically that has led to the failing of Obamacare repeal, that have created this pause in the president's legislative agenda, and they are going after them. And that's why the president, he's impatient, he's frustrated with the way Congress is moving. I'm not surprised at all that he's decided I've got to fight back and let them know that I mean business and that I've got to put pressure praise. He's obligated to put pressure on the Republican Congress.

BAIER: And the biggest pressure is obviously about whether the government shuts down. Here is the press secretary today and one of those senators, Mercedes, talking about.

SARAH HUCKABEE SANDERS, WHITE HOUSE PRESS SECRETARY: He campaigned on the wall. He won on talking about building the wall. And he is going to make sure that gets done. And he will continue to fight for that funding.

SEN. JEFF FLAKE, R-ARIZ.: We don't need a government shutdown. That never ends well. We don't save money doing it. To get a secure border, that's the goal, not to just fulfill a campaign promise of a wall that, it doesn't make sense in certain areas, certainly in Arizona.

BAIER: Senator Flake obviously from Arizona has been the focus of some Twitter scorn from the president as well. What about this shutdown possibility?

TOM ROGAN, THE WASHINGTON EXAMINER: Look, the disintegration of the relationships between Leader McConnell, Speaker Ryan, and the president reflects a broader growing doubt within the Republican base. But on the issue of a government shutdown, I actually think that once we get closer to that, the White House is not going to push that one simple because the advisors around the president will say after Obamacare not getting through, with tax reforms still on the board but increasingly in doubt because of those frustrations, it is a battle at this point not worth picking and that the risks at that moment are too high.

BAIER: I want to talk briefly about this trial in New Jersey of Senator Bob Menendez. He is facing a corruption trial. The jury is picked this week. But the judge is saying he has to the physically and trial which means he may miss some of these key votes. And there is a real question, as you look at the Senate balance of power, 52 Republicans, 46 Democrats, two independents, they caucus with the Democrats, whether that affects the Democrats ability to hold off some of these big votes.

CROWLEY: It absolutely could. An interesting situation, and Menendez's lawyer did appeal to the judge and said, can we work with this, can we delay the trial? Can we not have the trial in session on days when the senator has to be in Washington fighting for his constituents? And the judge basically said no, no, no. So Menendez now has to make a decision on any given day.

And legal experts seem to believe that in general it is to his benefit to be there for the jury to be able to see him, that his presence helps his case. By the way, another wild card here is Senator John McCain. How often is he going to be in Washington? When you have margins this narrow, one or two senators not being on the floor that day can really swing things. So as if there weren't enough uncertainty already about how these things are going to play out, you have two new x-factors.

BAIER: But this is just whether he's physically there. The RNC obviously is trying to jump on this, saying Dems like Chuck Schumer should be asked if they would support a convicted felon serving in their caucus. But this is obviously well short of the conclusion of this trial no matter how it goes.

But look at the reality. This reality is this could be a lengthy process in terms of what is going to happen in the courts. And Senator Menendez could appeal the verdict. So it's complicated. It's not that simple. And then you're talking about the race, the gubernatorial race in New Jersey which there's a huge likelihood that a Democrat is going to win. And when the Democratic candidate wins and he's governor, he will be sworn in January and then he gets to pick.

BAIER: But short of that, this judge's ruling is obviously an interesting thing politically.

ROGAN: Yes. And I think the key take away from this is that Jim Mattis once again seems to be one of the very few people the president trusts inherently. And that matters not just simply for this transgender issue but North Korea, for example, as well.

BAIER: And it is controversial. There were people inside the military stepping up against this decision.

CROWLEY: Yes, absolutely. And I think what's most interesting to me is when Donald Trump first tweeted about this, a lot people said the tweet has no legal power, is this even going to happen. And he followed up on that tweet, they are going to submit paperwork. And it tells you, you should take his tweets literally. They are not all necessarily just hot air as some people have implied.