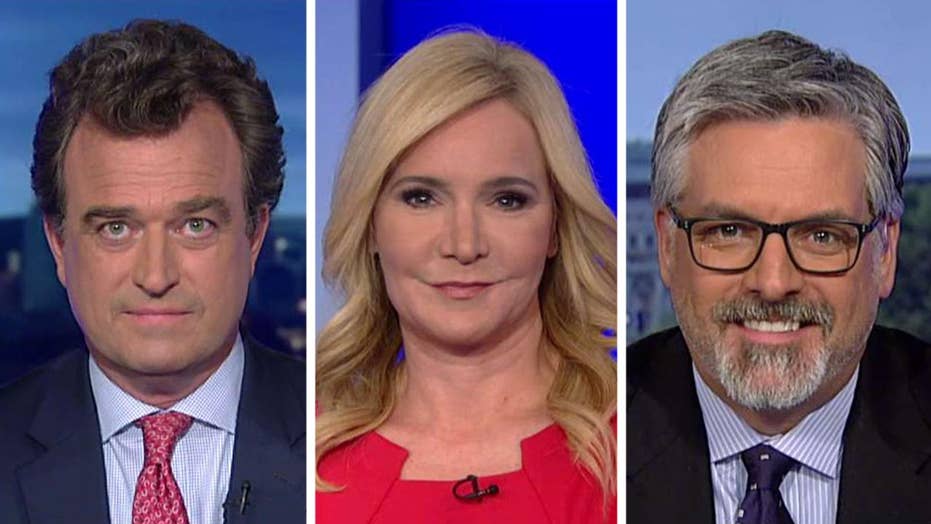 Trump blasts whistleblower complaint, calls on Ukraine, China to investigate the Bidens; reaction and analysis from the 'Special Report' All-Stars.

This is a rush transcript from "Special Report," October 3, 2019. This copy may not be in its final form and may be updated.

REP. ADAM SCHIFF, D-CALIF., CHAIRMAN, HOUSE INTELLIGENCE COMMITTEE: Once again you have the president of the United States suggesting, urging foreign countries to interfere in our presidential elections.

DONALD TRUMP, PRESIDENT: You look at the whistleblower's complaint, it's totally inaccurate, because the conversation that I had was absolutely perfect.

JOHN ROBERTS, HOST: A summation of where we are today with the impeachment proceedings in the House. Let's bring in our panel now to discuss this and some events that continue to be ongoing, Charles Hurt, the opinion editor for "The Washington Times" is with us, A.B. Stoddard, associate editor at Real Clear Politics, and FOX News contributor Steve Hayes. When I say some things are still going on, Kurt Volker is now in his ninth hour of an interview up there in the House. We'll talk about that in just a minute. But A.B., where are we with impeachment today, and what kind of day do you think President Trump had?

A.B. STODDARD, ASSOCIATE EDITOR, REAL CLEAR POLITICS: Well, the president was facing impeachment because of his phone call with the Ukrainian president, the transcript of which the administration released, where, without a quid pro quo or any kind of question of extortion, he was asking for the help of a foreign government in his election. Today he asked for the help of others, there's been reporting he's asked for help from Australia and Britain, and now he is asking the Chinese and admitting it out of the open. He is not allowed to do that.

So for Republicans who are completely silent on this, they are in a really bad corner -- he puts them in a bad one every day -- where they either have to say there is a new set of rules were President Trump, and there will be for President Warren, she will be able to declare a national emergencies and take away Congress appropriated and approved funds from military construction projects to spend them on her pet projects, and then she will be able to sit in the Oval Office and ask foreign governments for help in her election, in which case we don't need a Congress, or they are going to say this is a problem.

And they are on recess, so they remain in hiding except for the ones who love to come to the cameras and defend the president. But this is very, very tough for Republicans to defend. He is literally trying to break the system. It's a system they've sworn an oath to, and they have to be for the system and not the man. So it's regrettable for them.

ROBERTS: OK, I was going to play the sound of President Trump calling out to China, but time is short tonight, so I will skip that. But we know what he said. He reached out to China. To me, Steve, it's a strategy where he's kind of normalizing what may look like unusual behavior and may have the effect of watering down this conversation that he had with Ukraine. If he's asking everybody for help, why is Ukraine special?

STEVE HAYES, CONTRIBUTOR: On the one hand, I think doing it out in the open allows Republicans to say, look, he's doing it out in the open, he's not trying to hide anything, and at least gives them some kind of an argument. But you have to stop and think about what he said today. The president of the United States asked Communist China to conduct an investigation into his political rivals. This is the same Communist China that the president has accused of stealing intellectual property, manipulating its currency, breaking deals, bad faith on trade. But if China produces an investigative report that condemns Joe Biden --

ROBERTS: You don't think they're going to do that, do you?

HAYES: No, but why would the president ask? That's the point. The president is making a request that would be ridiculous if they honored it. You're not going to believe what the Communist Chinese say.

STODDARD: He is asking about Joe Biden, Charlie.

HURT: OK, fine. It's not his fault that Joe Biden is implicated in all this. That's not his fault. The first time, of course, he did this with that really hilarious moment, which of course no one in Washington has a sense of humor, that hilarious moment when he said that if anyone in Russia has Hillary's emails, please let them go. It was hysterical. Of course, everyone here got their knickers in a bunch and had heart attacks, but of course voters around the country could not care less. It didn't matter to them.

So the idea that we are now going to hang an impeachment hearing based on something that had already happened once before, and voters did not give a crap about, is just beyond ridiculous.

ROBERTS: Let me just jump in there, because we've got to go to a quick break. We can get more of this on the other side. Stay tuned. We'll be right back.

REP. JIM JORDAN, R-OH, HOUSE OVERSIGHT COMMITTEE: Ambassador Volker has been very impressive, and I said, has said nothing that -- nothing that coincides with up with what the Democrats are saying with their whole impeachment narrative.

REP. LEE ZELDIN, R-N.Y., HOUSE FOREIGN AFFAIRS COMMITTEE: The argument for -- in favor of, and the allegations of quid pro quo basically today just blew a massive hole throughout the entirety of that argument. There are depositions planned for next week.

ROBERTS: That's Congressmen Jim Jordan and Lee Zeldin talking about what they heard from Kurt Volker, the former U.S. special representative, special envoy to the Ukraine. We are back with our panel. A.B., you were saying that the president has put Republicans in a difficult spot, but there's two Republicans who are coming out saying what we are hearing from Volker --

STODDARD: There was two Republicans --

ROBERTS: -- what we're hearing from Volker is blowing holes in the Democrats' case.

STODDARD: Right, the reporting out of "The Washington Post" from this still ongoing testimony is that he told Rudy Giuliani do not trust your sources in Ukraine, and then he told President Zelensky after his phone call with Trump, do not get involved with U.S. politics. You are vulnerable, you need this aid, don't get into a situation where it looks like you are taking the side of one of the political parties. You need bipartisan support for an independent and strong Ukraine. And this is a bad means to your end.

I don't know what the end result of this testimony is going to be. I think that the fact that the reporting out today shows that he told Giuliani, he intervened to stop what Giuliani was doing.

HAYES: I think we'll learn a lot more about what Ambassador Volker said behind closed doors. I think the obvious question, we can look at the details, we can look at the trees individually. The big question for me is, what about the forest? What is Rudy Giuliani doing here? He's clearly going to solicit dirt from a foreign power on the president's ostensibly top political rival.

There are channels, there are proper channels, within which to do this. It would be appropriate for the Justice Department to take a look at this. You could have a treaty, a mutual agreement between the Ukrainian law enforcement apparatus and the U.S. to do an investigation that doesn't have a president leaning on this, when I think people involved in this know what outcome the president wants.

Something else happened today. We got an encrypted text stream between Bill Taylor, who is the ambassador to Ukraine, and Gordon Sondland who is the E.U. ambassador, who was named in the complaint. Bill Taylor says in this conversation, "As I said on the phone, I think it's crazy to withhold security assistance for help with a political campaign." Sondland writes back, "Bill, I believe you are incorrect about President Trump's intentions. The president has been crystal clear. No quid pro quos of any kind. The president is trying to evaluate whether Ukraine is truly going to adopt the transparency and reforms that President Zelensky promised during his campaign." Charlie, this whole thing started with a quid pro quo. There you have Sondland, who was named in the complaint as trying to rein in Rudy Giuliani, saying no quid pro quo.

HURT: And yet again another impeachment case is falling apart. But I also don't think that Donald Trump necessarily puts Republicans in a bad position. He's gotten a lot of them elected. I think Nancy Pelosi puts her people in a terrible position if she actually loses control of this and this winds up going to an impeachment. Can you -- Donald Trump is a guy who does very well in in the professional wrestling arena. Do you really think -- is this really where Democrats want to take this?

ROBERTS: And I'm wondering, is the water cloudy enough now that may be this thing doesn't have as much momentum as it did a few days ago?

HURT: No, if you would've asked me last week, I would have said no chance. This week, I think of these people have gone completely -- the train is off the tracks. And I think Nancy Pelosi really --

HAYES: These are process mistakes. Adam Schiff mischaracterizing what the president said and later misrepresenting his office's contacts with the whistleblower are problematic. They don't do anything to touch, I think, the big thing, which, as we've discussed, the White House, the president, Rudy Giuliani, and others, have all admitted.

ROBERTS: And said it all.

STODDARD: We could make process arguments until what he said in front of the chopper today, but I think it's all over now.

ROBERTS: Thanks, panel. When we come back, a homecoming proposal that's sure to put a smile on your face. Stay with us.

ROBERTS: Two Florida high schoolers with Down syndrome are stealing the hearts of people nationwide. In a video that was shared on social media David Cowan, a high school senior, asked his girlfriend, Saris Marie Garcia to homecoming. While she was cheerleading at a football game, David presented her with flowers, balloons, and a sign that read "Will You be my Sunshine to Homecoming?" Wow.

Thanks for inviting us into your home tonight.