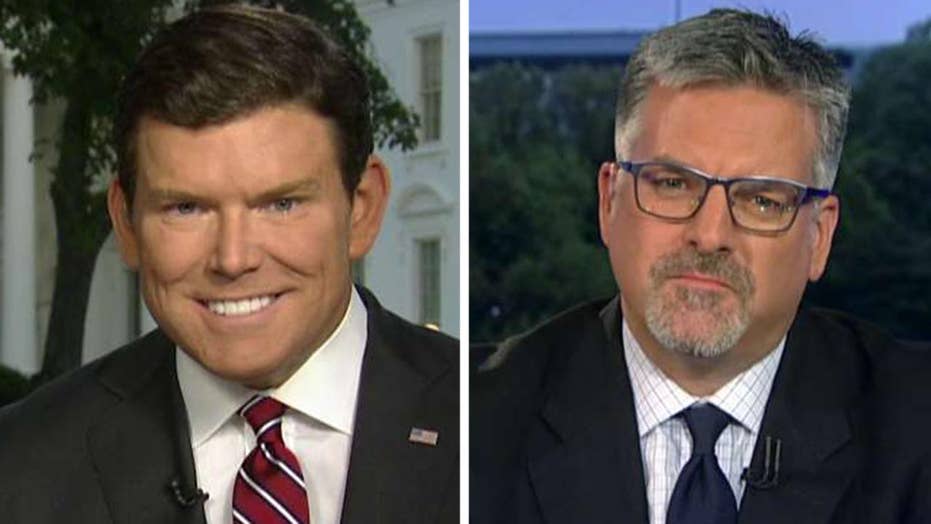 Reaction and analysis from the 'Special Report' All-Star Panel

This is a rush transcript from "Special Report with Bret Baier," September 26, 2017. This copy may not be in its final form and may be updated.

PRESIDENT DONALD TRUMP: I have plenty of time on my hands. All I do is work.

I will be going to Puerto Rico on Tuesday. I will also be going to the U.S. Virgin Islands.

The governor of Puerto Rico is so thankful for the great job that we are doing.

I wasn't preoccupied with the NFL. I was ashamed of what was taking place.

That's called a military option. If we have to take it, we will. It will be devastating, I can tell you that, devastating for North Korea.

Many administrations which left me a mess, but I will fix the mess.

BRET BAIER, ANCHOR: President Trump in the Rose Garden here at White House today talking about a host of issues, asked about a host of issues, primarily defending and saying more help for Puerto Rico is on the way, tweeting today "Thank you to Carmen Yulin Cruz, the mayor of San Juan, for your kind words on FEMA, et cetera. We are working hard. Much food and water there on the way." Receiving some criticism from lawmakers after getting praise for hurricane Harvey and Irma recovery in Texas and Florida.

Let's bring in our panel: Here with me at the White House, Julie Pace, Washington bureau chief for the Associated Press; and at our bureau in Washington, Steve Hayes, editor in chief of The Weekly Standard; and Bill Bennett, former education secretary and the host of "The Bill Bennett Show" podcast. Thanks for being here.

Julie, I want to start with you. In the Rose Garden it seemed like the president clearly got the Puerto Rico urgency and talked about it. And then we've had since then a number of briefings from the administration.

JULIE PACE, ASSOCIATED PRESS: They have look a lot more like the days around Harvey and Irma where this White House was really singularly focused on the storms, on the recovery effort. You had the president out there being really proactive with his messaging, a lot of officials out there. And so I think it has sunk in for them that this storm and the long-term recovery is perhaps greater than what we saw with Harvey in Texas. And it is incumbent on the president because these are American citizens to be out there leading that response, to be talking about this issue, to be making clear the amount of aid that is going to Puerto Rico.

It has obviously been a little bit slower for him in responding to this, and he did I think lose several days by focusing so much on the NFL. He can say he wasn't distracted but it was his tweeting and his messaging on the NFL that pushed that to the forefront and overshadowed what FEMA and other agencies actually were doing for Puerto Rico.

BAIER: Bill, you saw him in the Rose Garden today, saying, answering that question whether he was overtaken by that NFL issue. And he said, you know what, I can basically walk and chew gum at the same time. I work hard every day. Your thoughts on that contradiction and that whole dustup?

BILL BENNETT, FORMER EDUCATION SECRETARY: The president does a lot of things. As we know, he's a man of tremendous energy. He doesn't nap a lot and works on a lot of things. We also know that people who do a lot get more done. You have more things to do, you get more done. But what people pick up on and decide to spend time talking about on talk shows is something else.

In terms of the dustup, let me just say he's got a clear and coherent position which is shared by a lot of the American people. I have been listening to people from the NFL. I am a huge football fan. As my wife said, bad enough Friday, Saturday, Sunday we have to watch, now Monday, Tuesday, and Wednesday we have to debate these issues on football? Anyway, that's the predicament of the country now.

But there is no coherence to the view. You hear many different things from anybody who speaks about this, the reason for the protests. I will put my education secretary hat on and say I don't think people know American history. I don't think they know the story of the flag. Francis Scott Key, Frank Key watching that flag as the British battered it all night long and it was still standing. I don't think they know about the Iwo Jima Memorial over there where those guys are putting the flag up on Mount Suribachi, and I don't think they know unless they saw the movie "Glory" about that sergeant, William Carney, born a slave, part of the 54th Massachusetts, would not let the flag fall to the ground.

I always bring a lot of things back to the schools, what we teach. But Plato the single most important thing is who gets to teach the children and what do they teach them. When children become adults and they act out different roles in society and we are seeing the result of that.

BAIER: It will be interesting to see what kids say about this moment in time.

Steve, talking about the military listening to the president on North Korean today:

REP. JOHN GARAMENDI, D-CALIF.: God help us if we get into a war on the Korean peninsula again. We have 25,000 U.S. military on the DMZ border. It's time for our president to speak softly. We know we have a big stick. Move towards the negotiations. It would be far more fruitful.

BAIER: What about that? You hear from that Democratic lawmaker on the House floor and the concern over the rhetoric from the U.N. speech up until the Rose Garden today.

STEVE HAYES, THE WEEKLY STANDARD: I think it's appropriate to have some concerns about the rhetoric. The president today in defending his comments literally made a sort of he-started-it sort of argument about Kim Jong-un. I don't think some of the rhetoric has been helpful. I think some of it has been over the top.

But in terms of the policy, that member of Congress is just flat out wrong. It's been an appropriate and necessary and long overdue turn of policy from the Trump administration. All we've had for 25 years is diplomacy. And I would put diplomacy in the air quotes. Really what we've had is preemptive capitulation from Republicans and Democrats. Donald Trump is made it clear that he's not going to do that anymore.

The big question I think that the Trump administration faces now is what is the end game here? I think they've had a successful nine months on diplomacy in North Korea. They've gotten China to do things that other administrations haven't been able to do and really hadn't even tried. Where does this go and what is the president's end game?

BAIER: Julie, in the Rose Garden he praised the Chinese president. And obviously China is at least talking about changing with their financing of North Korea.

PACE: Sure, China, you have to remember the Chinese government moves very slowly. Their policies change at a pretty glacial pace compared to even our policies here sometimes. So the fact that China is showing some signs of cracking down on oil to North Korea, talking about how their banks will engage with North Korea is definitely a sign of progress. It's unlikely you're going to see a massive shift suddenly by Beijing. But the administration here and at the U.N. is really pleased with the signs that they have seen. The question is just what comes more quickly? Is it the North's development of their nuclear program and the steps that they are willing to take in terms of using it, or China's action to cut off their economic funding and then hope that that results in a difference in behavior by Pyongyang?

BAIER: We shall see. And also Iran factors into all of this.