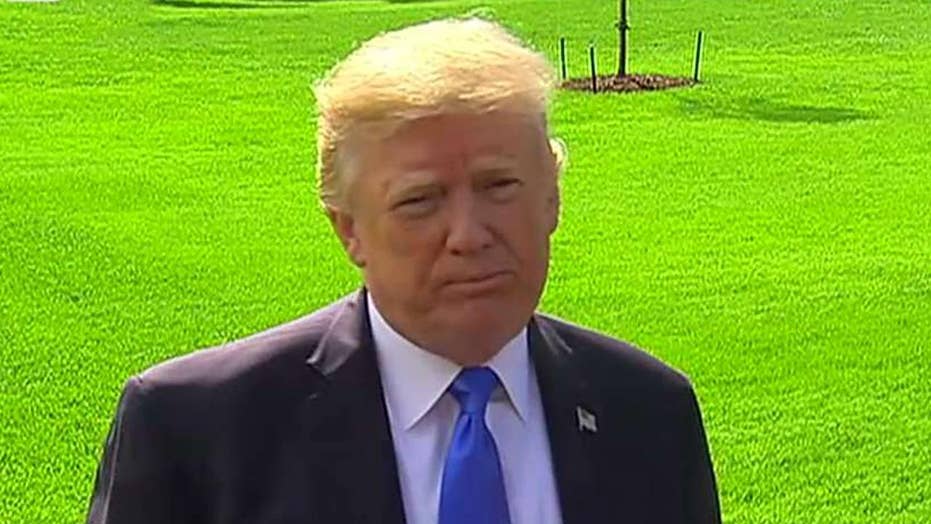 John Tamny: I think any time you give the federal government say in whom a business ells to by definition you're going to have crony capitalism. Now, the response will be that we had national security interests so that's why the Department of State had a role here. But the reality is, bad actors will always be able to get access to any market good—including uranium—no matter what. So all you're doing in giving the feds a say is empowering those close to government, like Hillary Clinton in government, to actually profit from what should be a private transaction.

Bruce Japsen: Well, here's the deal—what I would say, first of all, to the president's allegation about Watergate is it takes one to know one. And second of all, on the whole idea on uranium—you guys hate government, right? You hate bureaucracy? There were so many levels here. There was the nuclear, the foreign investments committee, there was the nuclear regulatory commission…and, you would need exports to get rid of any uranium. The idea that this is crony capitalism—there's no “there” there.

Elizabeth MacDonald: I see a connection. And by the way—Newsweek sees it, the Washington Post sees it, the New York Times sees it…they've had breaking stories on this. You're talking about Bill Clinton helping Frank Giustra, who was a Canadian mining magnet, get access to uranium. And then helping him basically with Uranium One, at the same time that the Clintons put Frank Giustra on the board of the Clinton Foundation running a separate, also Clinton Foundation-related charity…and then he says has taken Uranium One…it doesn't matter. They sold a fifth of the U.S. uranium assets to Russia and it doesn't matter that the uranium doesn't leave the country—Russia controls it, and we need that uranium for our own nuclear energy sources.

Sabrina Schaeffer: I'm with Mike that reasonable regulation and reasonable oversight is important, especially when you're dealing with dangerous transactions like this. But I'm also with John that corruption is when we pick winners and losers and when government gets as large as it does, there's only the opportunity for people to be sort of edging one another out, whether it's businesses or individuals…large sectors of the economy. And I think that's exactly what we see here. We see it over and over again because everybody wants a piece of that pie.

Mike Ozanian: David, the swamp just got a little bit lower with Flake and Corker gone. This is great news. Both of these guys scored an F on conservative review for liberty. If you want individual liberty, if you want individual rights, you should be celebrating that Corker and Flake are gone.

Bruce Japsen: These guys were votes for Trump's agenda by and large, but I don't really know. It's kind of a wash as far as I'm concerned. But I would say—Jeff Flake was a guy who shined the light on ear marks and stuff like that, so I don't think that these are two guys that are bad apples that are leaving Congress. I don't agree with them, but I don't think that they're bad guys.

Elizabeth MacDonald: I hear that, and I don't like the mud-throwing, I'll be blunt. But here's the thing—I think they need to drain the swamp further because you know what really bothers me? Now our 401K's are suddenly a bargaining chip for the Republicans to negotiate and pay for tax cuts. Since when? They campaigned and got political damnations on tax cuts, now using our 401K money, when social security—they've said for years—is insolvent. You need 401K's to back up social security. And also, they're gonna live off really cushy, cushy, cushy pension benefits from the government.

John Tamny: We've certainly seen that Republicans aren't really good on spending, but I don't think Trump is very good on spending either—he has all sorts of big government ideas himself. I think Corker and Flake made a mistake, and I say that as someone who's a frequent critic of President Trump. We're talking about someone who believes in protectionism, who believes in devaluing the dollar is the path to prosperity…they made a mistake because we need opponents of Trump. We need people in the House and Senate to moderate Trump's views simply because I don't think the Trump-Bannon wing has coat tails. We need good Republicans to stick around…it's too bad.

Sabrina Schaeffer: There are sort of two different issues here. I do think that it's important that we keep some people in Washington who have a moral backbone, and it's sort of unfortunate to see some people go but at the same time I think the Republican Party is dealing with much more than good vs. bad policies at this point. They have radically different views of government and government institutions and I think we're sort of facing a potential party realignment at this point and this is probably just the beginning.

NEW CALLS TO REFORM THE IRS AMID TAX PLAN DEBATE

Elizabeth MacDonald: The IRS's oversight of this has not been state of the art, and that small business guy, he lost his wife and he went bankrupt in the midst of this whole thing. It's a really bad practice to take money just on a suspicion. They took 17 million in just over 231 cases over a recent 2-year period at the IRS. The IRS has a lot to deal with because of congress and ObamaCare this practice really needs to be looked at.

Bruce Japsen: I don't really agree with this, and it's sort of akin to drug cases where property is being seized and so forth without any due process and I think this needs to be looked at and I don't necessarily think it needs to be part of the tax bill because that'll probably bog everything down.

Sabrina Schaeffer: I think it's okay to put it with the tax reform bill. The fact is you need to attach these smaller to larger vehicles if you want to see them get passed, and the reality is sometimes I think Washington forgets that our Constitution sort of delineates their power very clearly, it's not the other way around, you do not have the right to do this, but they forget that a lot.

John Tamny: It's revolting and to Sabrina's point it's an utter perversion of what's supposed to be a limited government, the Constitution doesn't limit our rights, it limits the rights of the federal government. Why do we allow this? My one thing is, stop blaming the IRS, IRS is just a vessel for Congress to do what it doesn't want to do. This is a Congress problem.