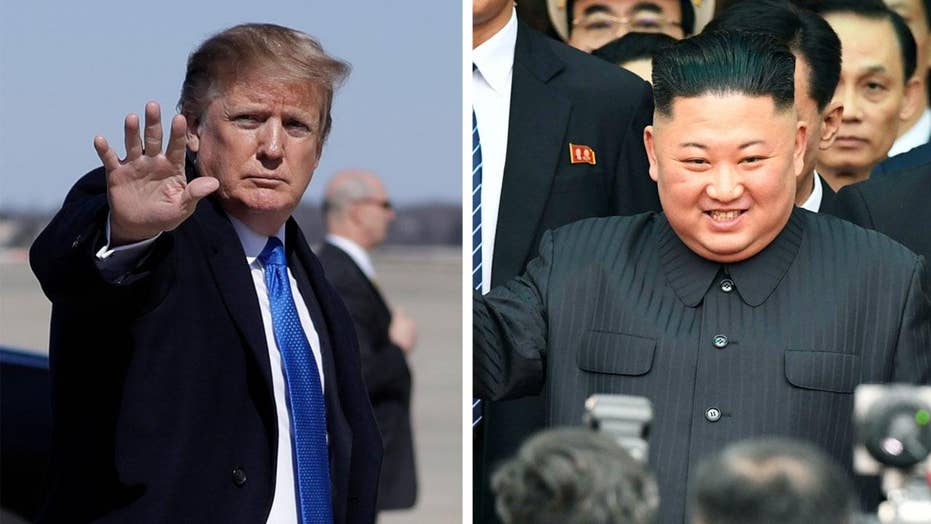 Hanoi summit to focus on denuclearization and economic development; analysis from the 'Special Report' All-Star panel.

This is a rush transcript from "Special Report," February 26, 2019. This copy may not be in its final form and may be updated.

MITCH MCCONNELL, R-KY, SENATE MAJORITY LEADER: What is not in doubt is that there really is a crisis at the border, and it seems to me our colleagues on the other side are in denial.

HAKEEM JEFFRIES, D-N.Y.: President Donald Trump has more stories than Harry Potter, and all of them are make-believe.

REP. ADAM KINZINGER, R-ILL.: The national emergency isn't about the immigration issue. It's about the drugs and it's about the human trafficking.

UNIDENTIFIED MALE: Even if Congress fails to strike down, I think the courts will.

UNIDENTIFIED MALE: The president is on strong legal ground to declare this an emergency.

UNIDENTIFIED MALE: A number of presidents, Republicans and Democrats, have used this power for numerous things.

BRET BAIER, HOST: The House just voted in Washington to overturn the president's declaration of a national emergency on the border. The vote was 245 to 182, all Democrats in the House voting yes, and there were 13 Republicans who joined them. Now it heads to the Senate. Senator McConnell saying it probably is not going to come up until mid-March but they are counting heads on the Republican side.

MOLLIE HEMINGWAY, SENIOR EDITOR, "THE FEDERALIST": Our founding fathers in their wisdom set up a federal government with three different branches that are supposed to be in tension with each other. And Congress in recent decades has just ceded so much authority to the executive branch, and they've done very little about it. So it's not a bad thing for Congress to reassert its authority and to retain that power of the purse that they have accorded to our Constitution. The problem for them I think is that the only time they are doing it, they have let the bureaucracy just grow so large, the only time they are doing it is when it comes to securing our border. And that might be a less politically savvy time to reassert authority. But if they want to do this, the same provision that allows Donald Trump to declare the emergency allows them to try to overturn it with a vote.

BAIER: Susan, the Republicans in the Senate aren't counting heads. They have likely lost three, Thom Tillis, Susan Collins, and Lisa Murkowski. they couldn't afford to lose one more. But the president has already said he is going to veto it if it comes to his desk, so they would need two- thirds to overturn that.

SUSAN PAGE, WASHINGTON BUREAU CHIEF, "USA TODAY": They're no question they won't have two-thirds probably in either chamber to override a veto. But if it passes the Senate, it would be a sign of more Republican willingness to push back to President Trump that we've seen in the previous two years. Even Roy Blunt, a member of the leadership, not exactly a bomb-thrower, said on Sunday that he could vote against this. We'll see if they can get that fourth voter or even more of Republicans who have expressed concern about the president's action here on the grounds that this sets a precedent you can see future Democratic presidents exercise.

JONAH GOLDBERG, SENIOR EDITOR, "NATIONAL REVIEW": Susan raises one of my main problems with the way Democrats are talking about this. Nancy Pelosi likes to say this is a Constitutional issue, but there are an enormous number of Democrats who are saying they are actually perfectly fine with presidents using unwarranted emergency powers to implement their policy proposals over the heads of Congress, they just disagree with this policy proposal having to do with the border.

Lots of these people have gone on and said we can't wait to do a Green New Deal or go after guns using this same power, sort of a threat that says if you guys are going to be unconstitutional, we'll be unconstitutional. So they don't have a lot of credibility with me on this.

I do think this vote is a little more significant than people are making it out to be, though, because my understanding is that the original National Emergencies Act was kind of gutted. They used to have another legislative veto in it, and it was taken out. And so this is another thing that the courts can look at to say this is the expressed will of the House, or of the Congress to do something, the president doesn't have -- this law was badly written, and they may throw the whole thing out.

BAIER: Yes, and that will be interesting.

OK, another happening on the Hill, that is the president's former attorney Michael Cohen just wrapped up a closed-door session with the Senate Intelligence Committee. He testifies in public tomorrow. He stopped by the microphones briefly. We'll take a listen.

BAIER: And we will cover that. Mollie, Republicans are saying this guy lied to Congress and now Congress is really anxious to hear from him. Democrats are saying this is going to be explosive. Mark Warner was kind of cryptic at the microphones earlier tonight. Your thoughts?

HEMINGWAY: I just wish that whatever he was saying was available for the general public. It's hard to ascertain what's going on what it's all behind closed doors. I'm not entirely sure that you're going to hear anything that noteworthy when Cohen was up against the Special Counsel he was willing to give them anything to reduce his sentence in prison. I'm sure that anything good he had he already shared, and I doubt that people should be putting their hopes of having something really explosive in front of Congress, the body that he lied to. He was also disbarred today. And he is also represented by Lanny Davis who had recently had to walk back a false claim he made to CNN. So it would just be good if we could evaluate these things in a transparent manner.

BAIER: And we'll cover it. Susan, then Jonah.

PAGE: We may not learn much new with Mr. Cohen's public testimony, but these Congressional hearings that are televised on big, controversial events can be a time that Americans take a look at something that's complicated that's unfolding that's controversial and make some judgments about what they think about it, about trying to understand the ins and outs of it, of making a decision on who they trust.

I remember that happened with the Iran-Contra hearings in ways that were unexpected after Oliver North testified in a way that seemed very compelling to a lot of Americans. So I wonder if this is that kind of moment, not where you get a headline of something totally explosive you didn't know before, but where there's just more of a sorting out by voters on what they think about this, or do they think it's important, who do they believe?

JONAH GOLDBERG, SENIOR EDITOR, "NATIONAL REVIEW": I think this is a bad optic for the White House just on the grounds that this is not evidence that Donald Trump hired the best people. But on the other hand, Mara is absolutely right, we shouldn't believe anything that Michael Cohen says unless he can provide paperwork or other corroboration for it. He has a lot of incentives to preen for the resistance crowd and say things that are catnip to a lot of people, and none of it should be given any credit unless it can be corroborated elsewhere, because he's a noted liar.

BAIER: Well, panel, thank you. We'll cover it all from Hanoi, appreciate it.

When we come back, the lighter side of this summit in Vietnam.

BAIER: Finally tonight, Vietnam is welcoming President Trump and the North Korean leader, Kim Jong-un, in some interesting ways. The Durty Bird, a restaurant in Hanoi, prepared for the arrival of the leaders with two burgers, the Dirty Donald and the Kim Jong-Yum. The Unicorn Pub created the Rocket Man cocktail, which is a play on the president's not so complimentary nickname for Kim before things warmed up between the two, combines the Korean drink Soju and Kentucky bourbon with a splash of fireball whiskey to match their fiery personalities.

And some Trump, Kim impersonators came to Hanoi to stage their own version of the summit, but the plans were canceled when Kim's lookalike was deported. They said he had an expired passport. If you are an impersonator, you have to make sure the passport is current.