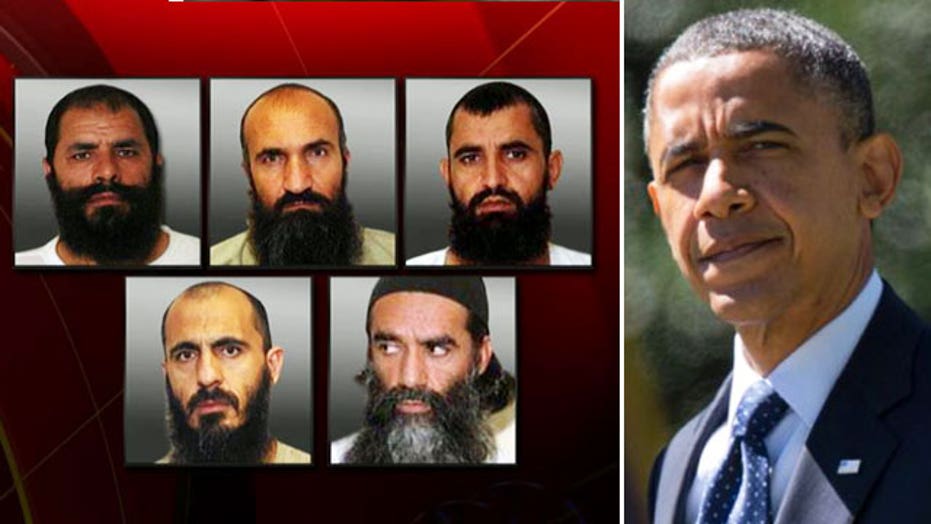 Charles Krauthammer weighs in on ISIS and the Taliban five

O'REILLY: "Impact Segment" tonight, more bad news overseas. Secretary of State John Kerry has broken his leg in a bike accident even as he tries to get a nuclear deal with Iran. That's coming up.

Isis apparently capturing thousands of American weapons from the Iraqi army which ran away from the Mosul fight leaving Americans weapons there so ISIS could grab them.

Finally, the five Taliban terrorists traded for Sgt. Bowe Bergdahl set to be released today but now the Obama administration doesn't want that. And travel on them has been restricted or so we hear. But even in the face of chaos abroad -- even, the President said this today --

BARACK OBAMA, PRESIDENT OF THE UNITED STATES: People don't remember, when I came into office, the United States in world opinion ranked below China and just barely above Russia. And today, once again, the United States is the most respected country on earth. And part of that, I think, is because of the work we did to reengage the world.

Now Charles, who joins us from Washington, he's author of the book "Things that Matter", now out in paper back. Great Father's Day gift. Charles knows that the last ten days or so, I've been doing the big picture on how things are going south in the USA, here, domestically, and overseas. And that's the theme of the first part of this program tonight.

You saw in three major cities -- Chicago, New York, Baltimore -- it is absolute carnage now. 50 people a weekend getting shot, dead, nothing being done. And overseas, it is almost even worse over there. So President Obama says things are great. What do you say?

CHARLES KRAUTHAMMER, FOX NEWS ANALYST: He says we're the most respected country in the world once again. You wonder what world, what planet he is living on. And it is not just as you enumerated, our enemies who have no respect for us -- the Chinese, the Russians, the Iranians of course, ISIS -- you can go all the way down.

It is our allies. You think the Ukrainians respect us or the Poles, the Lithuanians? How about Saudis? How about the Bahrainis? The king of Bahrain was supposed to come to the summit in Camp David with the President of the United States, he stiffs the President and foreign ministry of Bahrain issues a statement saying on that day, where was the king? At a horse show in England. Now if that's a sign of respect we've got problems.

O'REILLY: And Israel as well we have big problems.

KRAUTHAMMER: That goes without saying. Look at Egypt. Where did the President of Egypt go several months ago? First time in 40 years he goes to Moscow looking for (inaudible) and for weapons. We had a monopoly in that area of influence. That is not only gone and dissipated, but there's been a revulsion against the United States because we have checked out under Obama. And these allies who have depended on us for so long are finding themselves left hanging in the wind.

O'REILLY: All right. Now, we can see it -- you and me and I think moist factor viewers who live in New York, or Chicago, or Baltimore. Certainly we can see it right before our eyes.

Rahm Emanuel, Democrat mayor of Chicago re-elected, despite all of the dead bodies. This has been going for year under his administration. He hasn't improved it one iota, he is re-elected. President Obama gets up there, everything is good overseas, don't worry about it. His party is not outraged.

Here in New York, de Blasio, yes, his approval rating isn't going down but there doesn't seem to be a collective outrage among Americans yet about all of this deterioration or am I wrong?

KRAUTHAMMER: Well, I think you're right, there is no outrage now. I think this is a gradual process. People have gotten used to the miracles that Giuliani, Bloomberg have brought with the broken windows policing and they are not quite experiencing the crash that is coming.

But essentially what you have in New York and Baltimore and other places is a police strike. It is not announced. Probably isn't even organized but a cop who feels that he doesn't have the governor, the mayor and the attorney general behind him isn't going to go wade into a crowd of hostile people to uphold the abstraction of the law. This is pretty obvious.

And the effects of these things -- it is like the effect of Obama's withdrawal of foreign policy. It was predictable when he started in 2009 but the effects take time. The reason that the country is beginning to realize what kind of distress we are in our position abroad is because it takes time. Shows itself, in Ukraine, in the South China Sea, it shows itself with ISIS and the beheading of Americans. It shows itself over time.

That same thing is going to happen in the cities. I think that de Blasio, if this continues on this trajectory, will now have an easy time, I don't think he's going to have a chance at reelection.

O'REILLY: I don't know about that -- Charles. I think we are a different country now. I said this on Election Day when President Obama was reelected. I think we are a very different country, as far as what we expect from the government. I expect efficiency. I want good policy. But other people, they are just kind looking out -- what's in it for me. If I get what I want, I don't care what they do in the big picture.

O'REILLY: But Charles in Chicago it's been going on for what -- six or seven years now? And nothing has been done -- nothing. It is unbelievable.