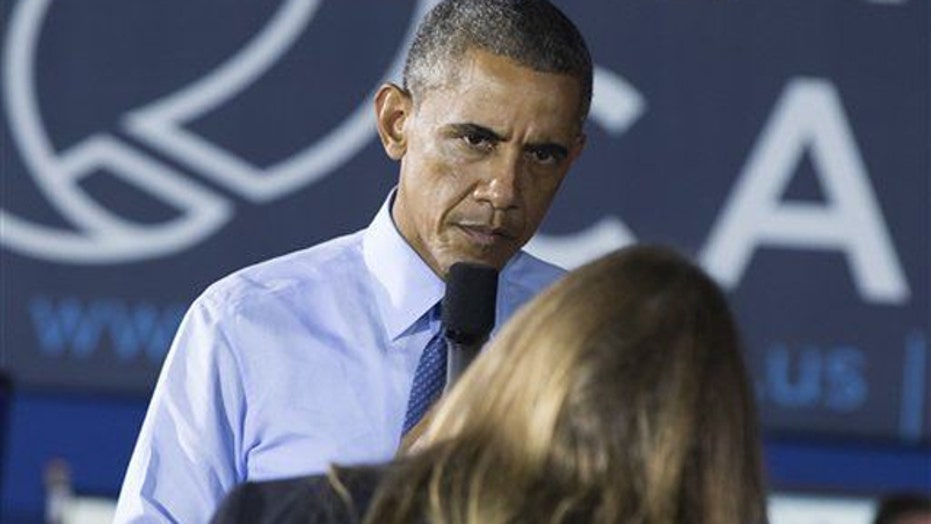 President Obama in denial about health of US economy?

WAYNE ROGERS: We know from the facts that the federal government gives us. That 65 percent of the workforce which was employed then in 2009 went down to 62 percent of it now in 2014, that's five years later. And five years of people working have shrunk the number of people in the workforce. There are more people on food stamps today, over 46 million people on food stamps today. 31 million people in 2009. In other words during this period of time the economy has gotten worse. Why? Because of Government intervention, because of Government policies. All of these things that they think about and they say oh everything is good-- it's the exact opposite.

MICHELLE FIELDS: Yeah, of course they're concerned about Ebola, they're concerned about ISIS, but what they're really concerned about are their empty bank accounts. Democrats continue to say oh the economy is doing just fine, its doing great. Well the labor participation rate is the lowest it's been in 36 years. And a new poll out shows that only 24 percent of Americans have confidence in President Obama's economic policies and it's easy to see why, because Obama's policies have not worked for the American people.

JONATHAN HOENIG: Their wages are actually down under the president. Not to mention that inflation has gone up. A hundred dollars in 2008, when the president got elected is only worth about 92 today. You started the segment talking about Obama saving capitalism; I don't think he knows what capitalism is. His government is playing a fundamental role in the economy whether it's intervention, whether its redistribution or whether it's control--that's why this recovery has been the slowest in modern economic times.

MICHELLE FIELDS: Well they've been indoctrinated; they're really just regurgitating what their professors have told them. But you know what? When something happens in the world, the world doesn't turn to North Korea or Iran or ISIS for help, they turn to America, because we are a force for good. If there's any possibility of world peace it's going to be because of America. It's a shame that they don't know that.

JUAN WILLIAMS: They're critical thinkers and I think they're some of the smartest kids in the country, obviously at Harvard. But let me just say, you guys are thinking short term. Of course ISIS is a threat at the moment and a threat to world peace. But if you talk about American policy if you talk about things America has done over the years, people have a lot of criticism, some of them are legit some are not. America is a force for good in the world, but don't tell those kids not to be critical.

JONATHAN HOENIG: This is the ravages of multiculturalism in my opinion. The whole idea is that America isn't that exceptional, were just like everyone else. Just like Islamist butchers, just like socialist European countries, just like communist China. We always hear from the president how we should emulate China. The result is hatred for America; I think it's all well and good to criticize American Policy.

WAYNE ROGERS: This is political correctness going berserk. If you remember the hullabaloo about the Washington Redskins, what are you going to do with the Cleveland Indians and the Kansas City Chiefs? We're going to call them the indigenous baseball teams and football teams? If you think of the difference between the men's room and the ladies room well call those indigenous toilets or you'll end up wetting yourself. I mean it's just crazy.

MICHELLE FIELDS: Well look, Columbus' arrival that really marks the beginning of our shared identity as a country. It is an important day. For the PC police to come out and try to take that away I think that's silly. If it was up to them we would have no Fourth of July because it would be offensive to British Americans? It's out of control, keep Columbus Day, it's silly.

JUAN WILLIAMS: Yeah, because you know what? Its historically you know kind of daft to imagine - oh there was no country here before Columbus. Look the reality is that there was a country here, and that we owe a great debt to in fact our Native American population and that's part of our history. That is part of our collective identity.