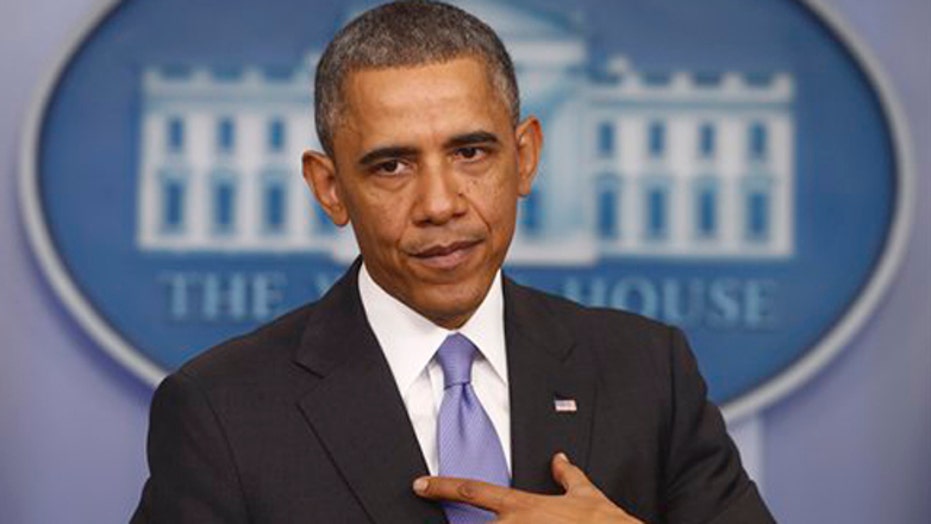 President in 'panic mode' over the Affordable Care Act?

This is a rush transcript from "Hannity," November 14, 2013. This copy may not be in its final form and may be updated.

SEAN HANNITY, HOST: The administration is totally clueless, and the president's own so-called fix, which is not a fix at all, proves it.

Now, the insurance industry has spent years now trying to figure out how to offer health care coverage thanks to ObamaCare, and they cannot reverse everything that they've done just because the president now snaps his finger and says so.

Now, today, America's Health Insurance Plans -- they put out a blistering statement in terms of a trade organization. They said, quote, "Changing the rules after health plans have already met the requirements of the law could destabilize the market and result in higher premiums for consumers. These are premiums that have already been set for next year based on an assumption of when consumers will be transitioning to the new law and the new marketplace. If now fewer younger and healthier people choose to purchase coverage in the exchange, the premiums will increase and there will be fewer choices for consumers. Additional steps must be taken to stabilize the marketplace and mitigate the adverse impact on the consumers."

Well, you're the consumers, so now what? So what will the Hail Mary pass of this last hour -- what will it do? Will it help the Democrats in the 2014 midterm elections? Will it accomplish that?

First of all, we got to get this on the table. This does not fulfill the president's promise. Congressman King, all this does is delay this madness. We're going to be back in the same place one year from now, aren't we?

REP. STEVE KING, R-IOWA: Well, we are. In fact, we're back in the same madness sooner, Sean, in that he can't fulfill this promise because the insurance companies have to opt in. And the insured need to also opt in. There's no way that that becomes 100 percent of the people get to keep their policy.

And furthermore, his restatement of the grandfather clause -- that always was a specious clause that would exempt if -- if premiums went up, it disqualified the policies. So this is a whole lot of rhetoric out here in a desperate president that's trying to react to now a Democrat pushback. The senators that went to the White House, the Democrats that have said, ee're going to vote with Republicans on this -- the president's trying to tamp this down. This is a panic mode, I think, for the president of the United States.

This speech that he gave today won't allow one American the confidence that they'll be able to keep their plan. All he did is tell insurance companies, you must send out another letter, and the letter must say, "Your health insurance policy isn't very good. The government has health insurance policies. Why don't you look at theirs?"

BACHMANN: That's all this is. So there aren't health insurance policies that people can look at. And again, if I'm an insurance company, just because the president does a press conference, I'm supposed to change what I do because of a press conference?

HANNITY: Wait a minute. This...

BACHMANN: The president needs -- the president needs to understand that Congress has to pass laws. He can't just stand up and dictate to private businesses, you must do what I say because I'm legislating through a press conference.

HANNITY: So -- but they've been preparing for this for years! So what do we have, six, seven weeks left in the year, and now these insurance companies have got to go back? You heard the comment from this trade organization, Congressman King. They're -- they couldn't be more clear in terms of what the impact is going to be. Does this last-minute political maneuver potentially result in even higher premiums for people?

KING: Well, Sean, it might be higher premiums for people, but the insurance companies have -- they look, like you said, a long ways into the future, like they said. And they're going to dig in pretty strongly on this.

The law says they shall take effect and be implemented in each month after December 31st of 2013. He has to come to Congress if he's going to extend this. And I think that he should come on bended knee and ask us would we bail him out, because part of what he's doing here is he's accepting an extension of the individual mandate, writing it in by rule. And that's what he said he would veto if it ever got to his desk.

This is a high level of contradiction in the president's position. It's just chaotic.

So the reason the president did this is, Congresswoman Bachmann, is because he doesn't want Democrats that have been complaining to him signing onto legislation tomorrow that you're going to vote on in the House, which is the If You Like Your Plan, You Can Keep Your Plan Act, because all these Democrats -- didn't they all make the same promise?

BACHMANN: Well, and he wants to make sure that he gets the credit for keeping his promise, because remember, this is really all about the president. And his poll numbers are tanking, so he wants to ride to the rescue, but he won't. They're going to have an even bigger problem because these plans won't be there for the 5 million people who've already received these cancellation notices. It will grow to 10, 15 million. So they've got a big problem.

The next problem that's about to hit is the other president -- other problem of the president -- when he gave a figure to the American people, you will see your premiums go down $2,500. He put a number to how much the average American...

HANNITY: Per family, per year on average.

BACHMANN: That's right, per family, per year. We're going to hold him to that promise, too. And the sticker shock is going to be astounding.

This is only the beginning. That's why I think your viewers really should have hope. I really do believe -- both Steve King and myself introduced repeal bills to ObamaCare. I think that our dream will be realized one day, and I do believe we'll see a parallel private system grow up because the American people aren't going to buy this plate of dog food that's put in front of them called ObamaCare.