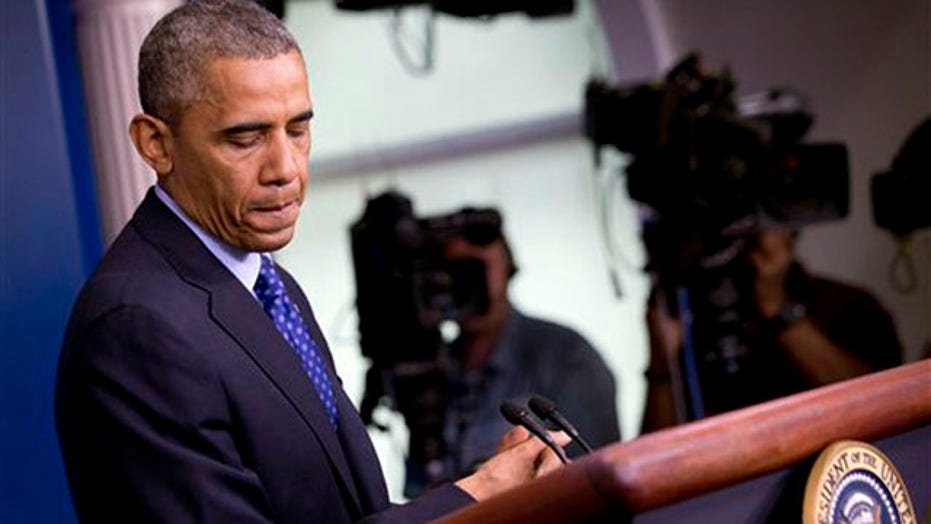 This is a rush transcript from "The Kelly File," June 19, 2014. This copy may not be in its final form and may be updated.

MEGYN KELLY, HOST: Breaking tonight, new fallout from the president's decision to send American troops back into Iraq as we learn the terrorists now have control of a chemical weapons facility.

Welcome to "The Kelly File," everyone, I'm Megyn Kelly. The president making clear today that Iraq is the Iraqis problem. But saying, we will send in 300 military advisers to help them solve it. This is we learn that here in this country, President Obama has lost the confidence of the American people. The latest polling shows most Americans, 54 percent, do not trust this president to lead, 54 percent. Nearly 60 percent disapprove of his foreign policy, the situation in Iraq clearly fueling some of that. But, why would Americans blame Barack Obama for the mess over there. Wasn't it the Bush-Cheney team that got us into this mess in the first place? I pressed former Vice President Dick Cheney on that last night.

KELLY: In your Op-Ed, you write as follows, "Rarely has a U.S. president been so wrong about so much at the expense of so many." But time and time again, history has proven that you got it wrong as well in Iraq, sir. You said there was no doubts Saddam Hussein had weapons of mass destruction, you said we would be greeted as liberators. You said the Iraq insurgency was in the last throws back in 2005, and you said that after our intervention, extremists would have to, quote, rethink their strategy of jihad.

Now, with almost $1 trillion spent there, with 4500 American lives lost there, what do you say to those who say, you were so wrong about so much at the expense of so many?

You've got to go back and look at the track record. We inherited a situation where there was no doubt in anybody's mind about the extent of Saddam's involvement with the weapons of mass destruction. We had a situation where if we -- after 9/11, we were concerned about a follow-up attack that would involve not just airline tickets and box cutters as the weapons but rather something far deadlier, perhaps even a nuclear weapon.

It would have been irresponsible for us not to act.

KELLY: Whatever the merits of getting into Iraq, the truth is, our troops made great progress there to the point where our current Vice President Joe Biden said this in 2010.

VICE PRESIDENT JOE BIDEN: I am very optimistic about Iraq. I think it is going to be one of the great achievements of this administration.

KELLY: So, what happened? We pulled out of Iraq at a precipitous time. That country was stabilizing but not yet stable. And the Iraqi leader, Maliki, was not trusted, rightly, as it turned out, by Iraq's Sunni population. Some urged our president to try harder to keep American troops in Iraq to protect the sacrifices they had made.

But Americans were war-weary, including President Obama, who couldn't or wouldn't reach a deal with Maliki, and the Americans went home. And on the downward spiral came for all sorts of reasons, including inadequate security, a terrible leader in Maliki, but also the fact that Sunnis and Shiites have hated each other for hundreds of years.

There was an opportunity to secure the gains we had made. The president chose not to seize it. And the group now terrorizing Iraq learned well from events in neighboring Syria that Americans, no matter what their president may threaten, are not prepared to return to this region in any meaningful way. Actions have consequences for Republicans and Democrats.

Joining me now, Andrew McCarthy, a former federal prosecutor and author of "Faithless Execution," and John Bolton, who's a former U.S. ambassador to the United Nations and a Fox News contributor. Gentlemen, thanks to both of you for being here.

Andy, you have written extensively about Iraq from the beginning on to today. Where do you stand on it?

ANDREW MCCARTHY, NATIONAL REVIEW CONTRIBUTING EDITOR: Well, I still think it was the right thing to do, to go in but I -- the reason for going in was in the post 9/11 period, we could not abide having rulers who were aiders and abettors of terrorism. I think what President Bush said right after the 9/11 attacks that we had to hunt down terrorists where they operated in the world, and treat terrorist supporting regime as terrorists, that was the only prescription for victory in the war. Where I think the detour that went wrong was the idea of trying to turn Iraq into something resembling a western democracy, which I think was a fool's errand in the end. And I think the major problem in Iraq and the one that continues to be intractable is Islamic supremacism, and that's not a creation of either Obama or Bush that's just a fact of life in that region.

KELLY: You know, Ambassador Bolton, as the president announces that we are going to send 300 military advisers over to Iraq, which ,you know, is like, is that synonymous with soldiers? I mean, when we sent a bunch of advisers over to Vietnam, too, and we wound up in a war over there. Americans are questioning tonight whether this is worth it, whether we want to be getting -- first of all, it is 300 people, troops, advisers, whatever they are, going to get it done. And second of all, do we want to send even one more under these circumstances?

JOHN BOLTON, FORMER U.S. AMBASSADOR TO THE U.N.: I have no idea what the president's policy is, and I'm not sure he does either. But the question for us is not what the last 10 years of history might allow us to argue about, but what our interests are today. And it seems to me, this conflict at the moment between ISIS and the al-Maliki government is a conflict between two sides that we don't have much interest in. I think you have to try and assess who the principle enemy is to American interest, and right now, it is Iran.

So, I don't see any up-side to aiding the Maliki government, which is largely responsible in Iraqi terms for the effective partition of the country that's underway, and aiding al-Maliki would objectively strengthen Iran, which I don't see.

KELLY: But let me ask you about this. Because people are looking at the past 10 years to figure out how we got here and whether that is reflected in these poll numbers for President Obama, which are on a downward spiral and whether he can be fairly tarred with what's happening in Iraq at all, much less significantly. And it seems like when people go to talk about President Obama, they talk about the fact that we didn't leave some troops there to sustain the blood and treasure that was sacrificed, rightly or wrongly, depending on your point of view from when we went in by our American troops on the ground there.

KELLY: All right, let's talk about it. That's an important point. The audience should know, you are not a big defender of President Obama.

MCCARTHY: No, not often.

KELLY: But you are saying, people need to remember, 80 percent of the Iraqis wanted us out of that time. Seventy percent of the Americans wanted us out of that time. President Obama ran for office saying he would get us out at the time. And so, he got in, Ambassador Bolton, al-Maliki gave us a hard time about the immunity for the troops and so on. But, Mr. Obama's defender -- critics say that's all nonsense. What really happened was he used whatever excuse he could to avoid putting troops on the ground. It wouldn't have taken that many but it would have taken more than the paltry 3,000 he was offering. And if we could have kept some more on the ground there, we could have protected the gains that 4500 Americans sacrificed their lives to make.

BOLTON: I think that's true, but I think, unfortunately, it is irrelevant to the circumstances we face now.

BOLTON: Well, it is very interesting, but the decision-maker has to look at environment we have now, and that's why I think it is a mistake at this point for the president to put these 300 advisers in place to help the al-Maliki government. I think that ends up in strengthening Iran's hands in Iraq at a time when Iran is the principle threat that we face. And, you know, I couldn't care less what Obama's poll numbers are. The issue is what we should do to protect American interests.

KELLY: OK. You know that a lot of people are out there tonight saying, well, weren't you one of the people who was in favor of going into Iraq in the first place and is that why you don't want to discuss the past ten years and whether they were worth it?

BOLTON: I would be happy to discuss the past 10 years and we can start 10 years before that if you want, but that's not the question that America faces today.

KELLY: Andy, I'll give you the last word.

MCCARTHY: I just think the fact on the ground that makes a difference continues to be the Islamic supremacist and I am not convinced that we could have consolidated our gains unless we were willing to have a permanent troop deployment there. And, you know, I think it is quite right to point out that right now, we don't have an ally in this game, and I don't see Iraq as any different from Syria in that regard.

KELLY: Very interesting discussion, guys. Thank you both so much.