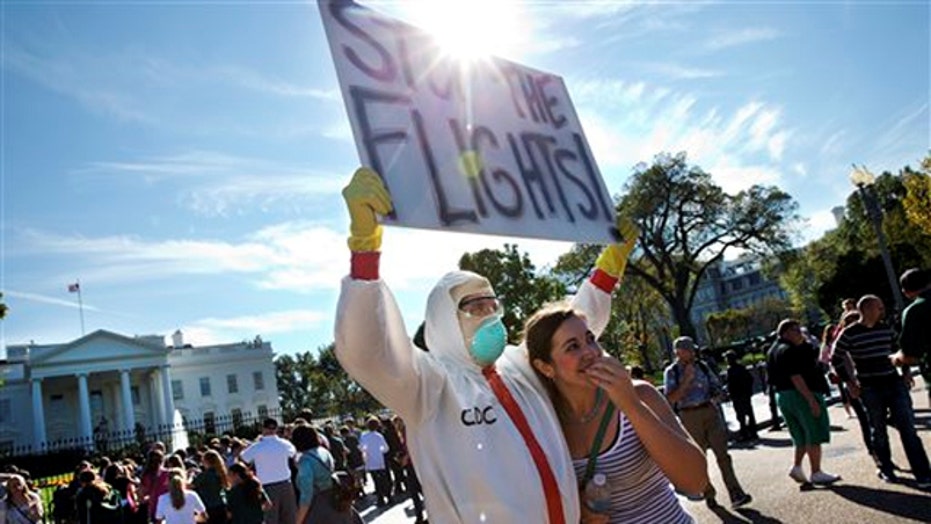 MICHELLE FIELDS: It's amateur hour right now at the CDC and White House. We should be proactive in our response to Ebola, and instead we are being reactive. I don't understand why the travel ban wasn't implemented right away. What we should be doing is banning anyone who comes into this country that originates from a country that is affected by Ebola. We should do this until they get the virus under control in those areas. It's common sense.

BOB BECKEL: Let me say, one of the reasons [people are worried] is they turn on shows like this, our show, and we keep talking about this stuff. There are 318 million in this country; 3 have had Ebola. Having said that, I don't think a travel ban will affect the medical aspect, but I would do it to cover myself politically, because God help you if one gets through, you'll be ravaged. I'd go ahead and do it for that reason.

JONATHAN HOENIG: Well, you know, Eric, there's a difference between possibility and probability. I think bob actually makes a very prudent point here. In a nation of 300-plus million people, we're talking .00001 percent that have even been affected by Ebola. There is a lot of fear out there, but fear and emotions are not tools of cognition and when people take a step back and realize the countries most affected are those with terrible medical care and this is, from my perspective, at least, not spreading as fast as a lot of folks in the media would have you believe.

WAYNE ROGERS: Well, Eric, we all know all of those countries are racist. Everybody knows that. They're all racists; of course they are. Please, give me a break. I've been talking about this for a month now. Every death is worth -- you're trying to save a life here. This is not measles. This is something that will kill you. We know if you read "The Hot Zone", if you read any of those books that talk about Ebola and Marburg, and all of these hemorrhagic diseases-this is lethal stuff. The best thing to do is quarantine the people who come into the country if the they've been in one of those countries, through Paris or London or whatever from one of those countries-- quarantine them the 21 days. That's just automatic. Not to do that is stupid. To ban people coming from those countries is also a mandatory thing. You've got to do it.

MICHELLE FIELDS: Look, I don't care if people make money, but don't make money and then pretend that you care about the high cost of tuition and then charge a school $225,000 to speak. I mean, this is the epitome of hypocrisy. This entire family is hypocritical. This family said they were "dead broke" and their daughter Chelsea said that she just "can't care about money". She tried so hard, but she can't, yet she spends $10 million on an apartment in Manhattan. The whole family is hypocritical.

BOB BECKEL: The height of hypocrisy is you two [Eric and Michelle]. The implication is that she took the money out of the school. She took it out of a foundation.

WAYNE ROGERS: Well, I don't blame Hillary at all. She's got price, she says, Hey, I'm out here giving speeches. You want to pay me the $225k? Pay me. The morons in this operation are the people who agreed to pay her. That's just dumb. I don't care where it came from-- they are people connected to the college. If they make that decision they are responsible. Those are the people who you should be criticizing, not Hillary.

JONATHAN HOENIG: Well, I don't mind if she makes money. What is frustrating is that the reason she can make $225,000 a year, Eric, is because she is political. Politics are her own, her whole raison, you know, d'etre. It's what she does. What makes college so expensive isn't the fact she makes $225,000 for a speech, but it's the policies that she advocates: more government control in education. That's what has made tuition prices goes up, and will continue to make them go up.

BOB BECKEL: I mean it's true; Abbott is a hypocrite. But that's a "Hail Mary" pass. You know you're behind; you're going to throw that. When I started the campaign business it was 20 percent of our ads were negative, 80 percent were positive. By the tie I left it was exactly the reverse. They work.

WAYNE ROGERS: I bow to Bob on this. I think he's probably right. He's done this; I haven't. If it's affective-particularly if you're behind-you take your best shot. A lot of times they don't work, and they backfire on you. If they backfire on you, you turn around and do a new strategy.

JONATHAN HOENIG: Wayne, when you say that Bob has done this, do you mean that he's lost elections before? I wasn't exactly sure what you were talking about.