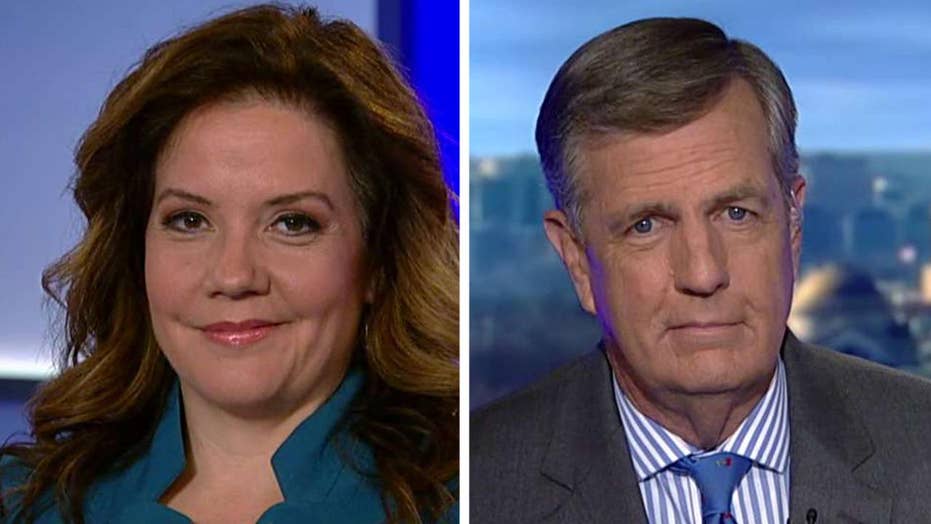 This is a rush transcript from "Special Report with Bret Baier," September 17, 2018. This copy may not be in its final form and may be updated.

DEBRA KATZ, DR. FORD'S ATTORNEY: She clearly considers this an attempted rape. She believes that if it were not for the severe intoxication, Brett Kavanaugh, she would have been raped.

PRESIDENT DONALD TRUMP: We want to go through a process, we want to make sure everything is perfect, everything is just right. I wish the Democrats could have done this a lot sooner because they had this information for many months and they shouldn't have waited until literally the last days. They have done it a lot sooner.

BRET BAIER, ANCHOR: Well, this is moving forward to a public hearing. Just receiving word within the hour from Senator Grassley, the committee chairman: "As I said earlier, anyone who comes forward as Dr. Ford has done deserves to be heard. My staff has reached out to Dr. Ford to hear her account, and they held a follow up call with Judge Kavanaugh this afternoon. Unfortunately committee Democrats have refused to joins us in this effort, however, to provide ample transparence. We will hold a public hearing Monday to give these recent allegation as full airing."

Dr. Ford that he references is Christine Blasey Ford. She is the accuser who has come out. She is a college professor, and she is saying that she will tell her story publicly up on Capitol Hill. And Judge Kavanaugh has pushed back again, saying it's all not true.

STIREWALT: It's going to be a real goat roping. This is going to be an ugly, contentious, fraught space, and the Democrats have to be cognizant of overreaching, but the Republicans have to be very cognizant about not turning off, offending people like Susan Collins, people like Lisa Murkowski, whose votes could be affected here. And if they are not seen being fair and open and even handed with this woman, with the accuser, it will go very poorly.

BAIER: A.B., this comes in the context of a midterm election that is looming, obviously, within just a matter of weeks.

A.B. STODDARD, REAL CLEAR POLITICS: Right. I have no idea who to believe, and without getting into any of that, I think the Democrats, obviously there are questions about senator Feinstein bringing this up before this woman came forward, and why is that acceptable? And then the Democrats, there was a hearing today that Brett Kavanaugh was going to meet with judiciary members or top staff. Democrats said they didn't want to go. Why not?

That said -- and the White House responded I thought very well today, and the president. And I think it's very smart they're having these open hearings. A few hours ago we thought that the Senate majority leader was resisting this idea, and that would have been a huge mistake.

That said, there is still time for the Republicans on that committee or in leadership to mess this up. And if they do not handle -- I'm going to echo what Chris said, if they do not handle this well and give this woman her due, they will face a stampede on November 6th and possibly a Democratic Senate. And it's just a mistake they don't want to make.

BRIT HUME, FOX NEWS: It looks to me from what we know now as if somebody is going to have to corroborate their own version of events somehow or we're going to end up with he said, she said, and no one will be able to say the other is lying or telling the truth.

BAIER: Obviously two he-saids here. There is another person.

HUME: That's true. That is true. Mark Judge was alleged to have been in the room, and he says he doesn't remember anything like that happening. So that would be two against one. Of course, he is being attacked because he had alcohol issues through the years, so you can imagine how ugly that will get.

But if it comes down to that where it can't be proven or disproven, the last time that happened was Anita Hill and Clarence Thomas. It was never successfully established that she was telling the truth or that he was in denying her allegations of improper sexual advances to her. And he got confirmed, and he got confirmed by a Senate 56-44 Democrat as opposed to this one which his narrowly Republican. But they were, back in those days, Bret, as you know, I'm sure, there were a lot of centrist Democrats. There aren't very many of those anymore, or centrist Republicans either.

BAIER: Mollie, Brett Kavanaugh has now put out a couple really vigorous defense and denials here. He said "This is a completely false allegation. I have never done anything like what the accuser describes to her or to anyone. Because this never happened, I had no idea who was making this accusation until she identified herself yesterday. I am willing to talk to the Senate Judiciary Committee in any way the committee deems appropriate to refute this allegation from 36 years ago and defend my integrity." He says he wasn't even at that party.

MOLLIE HEMINGWAY, THE FEDERALIST: Right. This is why, in addition to the political implications, I think this is a really interesting question of whether we want to be the type of society that handles disputes this way. This is an allegation that was made. It's at odds what a gazillion people said about Brett Kavanaugh, including women he dated at the same time this was alleged to have happened, and in college.

The way it went down, as A.B. noted, is very curious. Dianne Feinstein chose not to bring it up any of the times she could have done it behind closed doors when she was talking to him privately, only orchestrating a big public leak that makes it seem like she's less interested in justice than using this as a political cudgel. And of course Democrats began this whole process by saying they would do literally whatever it took to stop this nomination.

And so I think there is an additional question about whether we think it's appropriate that an allegation that can be neither proven nor disproven should be the basis for determining who goes on the Supreme Court or whether we should have a much higher standard for rule of law and how we handle important things like Supreme Court nominations.

BAIER: Here is the Senate minority leader Chuck Schumer on this woman's credibility.

SENATE MINORITY LEADER CHUCK SCHUMER, D-N.Y.: I believe she is credible. A lot of my Republican friends don't. What are they afraid of? Are they afraid that she might be very persuasive? Well, if she is, it's a whole different ballgame, isn't it?

BAIER: Chris, I mentioned with Jonathan Turley earlier that if it goes down this road and the nomination is pulled, will Democrats start impeachment on Judge Brett Kavanaugh, because if he is not eligible as, they believe, a sexual assault perpetrator for the Supreme Court, how is he eligible for the second highest court in the land.

STIREWALT: I'm sure they would, but there is a serious consideration for Democrats politically here that I don't think they have wrapped their brains and completely. If they did succeed in getting the Kavanaugh nomination taken down and there is a vacancy on the Supreme Court on Election Day, and Joe Manchin and Claire McCaskill will say come on, Schumer, you are not helping us here. Nobody more than those red state Democrats wants this nomination complete, done, and moved on from. If this linger overs it has political consequences for them.

BAIER: Does this open up, though, the possibility that they now have a free vote to vote against Kavanaugh, and maybe they were going to vote yes but now they don't.

HUME: I've long believed you'd get some Democrats if no Republicans broke. I still think that's a distinct possibility, if all the Republicans stay together and the nominee is thereby guaranteed to be confirmed, I'm sure Schumer will privately say to the wavering Democrats that are in tough reelection fights this year because of the states they're in, you go ahead and cast the vote you need to take for the purpose of your reelection. But, if a Republican or two cracks, I don't think this nomination is going to be saved by Democrats. I don't think there is the slightest chance of that.