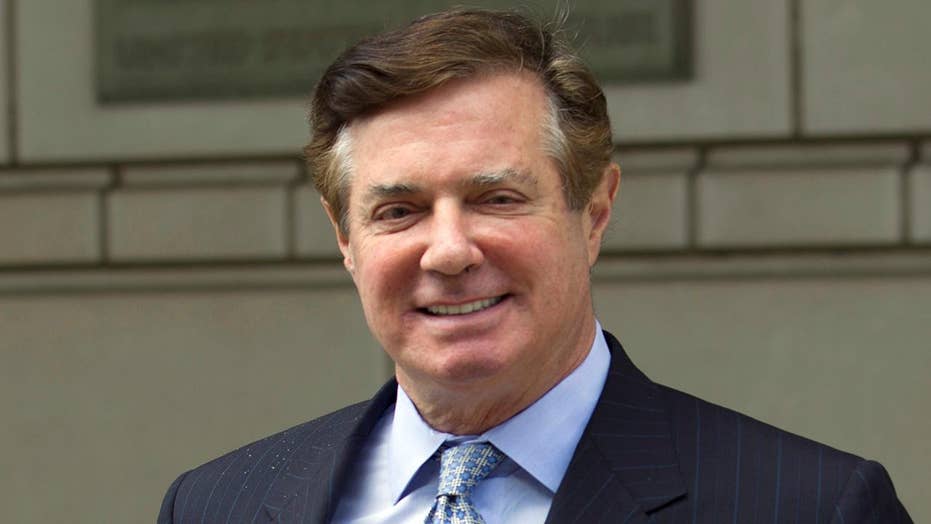 This is a rush transcript from "Special Report with Bret Baier," September 14, 2018. This copy may not be in its final form and may be updated.

KEVIN DOWNING, PAUL MANAFORT'S ATTORNEY: A tough day for Mr. Manafort, but he accepted responsibility. And he wanted to make sure that his family was able to remain safe and live a good life. He's accepted responsibility, and this is for conduct that dates back many years. And everybody should remember that.

KENNETH STARR, FORMER FEDERAL PROSECUTOR: I think Manafort is entirely a sideshow. We don't know what Paul Manafort knows, but there's no reason to believe that anything that Paul Manafort has will in any way implicate the president of the United States.

BRET BAIER, ANCHOR: Interesting, Ken Starr last night on the show. Today, a plea deal officially from Paul Manafort, former campaign chairman for the Trump campaign, one count of conspiracy against the United States. We're talking about money laundering, tax fraud, failing to file foreign agent registration act, lying to the Department of Justice, one count of conspiracy to obstruction of justice, that's witness tampering. He faces up to 10 years in prison on these charges in D.C. plus whatever he faced in those charges in Virginia.

And under the terms of this deal, this is the big part, Manafort is cooperating with Special Counsel Mueller's investigation. When the White House put out a statement, Sarah Sanders said, "This had absolutely nothing to do with the president or his victorious presidential campaign. It is totally unrelated." Rudy Giuliani, the president's counsel, says "Once again an investigation has concluded with a plea having nothing to do with President Trump or the Trump campaign. The reason, the president did nothing wrong."

Let's start there with the panel: Jonah Goldberg, senior editor at National Review; Leslie Marshall, syndicated talk radio host, and Mollie Hemingway, senior editor at The Federalist. OK, Mollie, significance, what we know, what we think we know.

MOLLIE HEMINGWAY, THE FEDERALIST: This relates to the special counsel, so this is significant that Paul Manafort has pled guilty. That special counsel was set up ostensibly to root out collusion between the Trump campaign and Russia. And there has still been no evidence of that.

One of the things related here was about failure to register as an agent of a foreign government. So if the special counsel is interested in a failure to register for Russia that deals with the 2016 election, he should start looking at Christopher Steele who was the British agent who was secretly hired by Hillary Clinton and the Democratic National Committee to create the Russian narrative, and that was weaponized and used by the FBI at the same time he was working for Russian oligarchs like Oleg Deripaska and lobbying on their behalf to the Department of Justice to the number four guy at the Department of Justice, Bruce Ohr. So if the special counsel is actually interested in what it was a ostensibly set up to look into, he has a long way to go in another direction.

BAIER: Sometimes the president likes what Alan Dershowitz says, sometimes he doesn't. Here he is today reacting to all of this.

ALAN DERSHOWITZ, HARVARD LAW PROFESSOR EMERITUS: Of course they should be. There's nothing that he can testify to that would probably lend weight to impeachment because he didn't really have close contact with President Trump while he was president, but he did have a contact during the campaign. What they are looking for is self-corroborating information that can be used against Trump. Once he agrees to cooperate, he has to cooperate about everything. There is no such thing as partial cooperation.

BAIER: Jonah, the question at the beginning was, should the White House be worried, or the president be worried?

JONAH GOLDBERG, NATIONAL REVIEW: I think it should be a little bit. I think Sarah Sanders is absolutely right when she says the crimes that he was charged with in these cases have nothing to do with the president. The only thing -- and I tend to agree with Ken Starr, Manafort may not have anything that touches the president. The only issue is he had to give Manafort something that Manafort wanted -- had to give Mueller something that Mueller wanted, otherwise Mueller wouldn't have given him a deal. What that is has to be at the very minimum interesting.

Whether it leads to impeachment, I dismiss Alan Dershowitz's arguments. I'm not arguing for impeaching Donald Trump, but Alan Dershowitz has simply created a theory about impeachment, declared Donald Trump as a de facto client, and then takes whatever argument is useful to him to make it. Who knows what Manafort is offering and who knows whether it's necessarily true. But it can't be nothing.

PRESIDENT DONALD TRUMP: One of the reasons I respect Paul Manafort so much is he went through that trial. I know all about flipping. For 30-40 years, I've been watching flippers. Everything's wonderful, and then they get 10 years in jail and they flip on whoever the next highest one is or as high as you can go. It almost ought to be outlawed. It's not fair.

TRUMP: I have great respect for what he's done in terms of what he's gone through. I would say what he did, some of the charges they threw against him, every consultant, every lobbyist in Washington probably does.

BAIER: At the time, obviously, Paul Manafort was suggesting he was not going to cooperate.

LESLIE MARSHALL, RADIO TALK SHOW HOST: And interesting, isn't it, that he's so new. When you're facing 10 years you are going to flip, and you're going to flip on anybody, even the person on the top. Telling, perhaps prophetic, we don't know, because we don't know what he is going to provide. I agree 100 percent there has to be something of substance. There would've been no deal cut either way. Any lawyer knows that.

But with regard to your point, this is a three-pronged responsibility that Mueller is tasked with, and one of it is the Russian meddling in our elections. And Manafort has relationships with a lot of different Russians. And that could be where he is going with this. Obviously he has pressured and used this tactic to pressure Manafort to come to this point right now.

And the big thing for Mueller is he was not in the room at the Trump Tower meeting, but Manafort was. And I think that's where he'll be able to have more information to know, quite frankly, if there was any collusion or any conspiracy, not necessarily by the president, remember, but perhaps by members of his campaign.

BAIER: Sure. But to their point they wouldn't have made a deal.

HEMINGWAY: Mostly what's been happening here in this very expensive special counsel probe is an investigation of FARA violations. So it might be more reasonable to suspect that he is going to cooperate against Tony Podesta or something like that rather than something to do -- none of us knows, but to speculate when there has not been one scintilla of evidence, not one scintilla of anything dealing with collusion in the 2016 election seems also --

GOLDBERG: Except the Trump Tower meeting, which was evidence of collusion.

HEMINGWAY: Nothing compared to the Russia dossier itself which has yet to be investigated at all by the Mueller probe.

MIKE POMPEO, SECRETARY OF STATE: What Secretary Kerry has done is unseemly and unprecedented. The secretary ought not to engage in that kind of behavior. It's inconsistent with what the foreign policy of the United States is as directed by this president, and it is beyond inappropriate.

JOHN KERRY, FORMER SECRETARY OF STATE: I think everybody in the world is sitting around talking about waiting out President Trump.

BAIER: Secretary Pompeo pretty hot today at the State Department, saying that Secretary Kerry is undermining U.S. policy as it is now with regards to Iran.

GOLDBERG: I'm having a hard time parsing through all this, which makes me tempted to give in my cynicism and think this was a clever ploy by Kerry to make his memoirs interesting, which I think is a really heavy lift, because his office is saying that they actually briefed Pompeo about his conversations, that Pompeo knew about these things. I agree with Pompeo on the surface of it that it certainly does look inappropriate, but John Kerry has been doing these kinds of inappropriate things for his entire career. When he was a senator, he would do this kind of stuff. People talk about him violating the Logan Act. So it kind of feels like he's trying to just generate buzz for a truly un-buzzworthy book.

MARSHALL: If we are going to go to the Logan Act, it was 1836 and there was not even a conviction about indictment.

BAIER: Although there was a lot of uproar about Michael Flynn.

MARSHALL: Yes, there was. But was their uproar about Tom Cotton? Was their uproar in the GOP in the Senate -- on my side, yes -- that sent a letter saying, hey, in a sense, wait out the Obama administration. You can't have the hypocrisy and a different set of rules, one president over another, for one party over the other. John Kerry is a private citizen. What he has done is not a violation of the Logan Act. It is not a violation of FARA.

MARSHALL: And we don't even know what that conversation was about. And I haven't heard John Kerry say that he told them to wait out. What did he say -- I think everybody in the world is saying that.

MARSHALL: If Mike Flynn's life was destroyed because he ostensibly violated the Logan Act and that's what the Obama administration official claimed, then they should have some tough questions to answer.