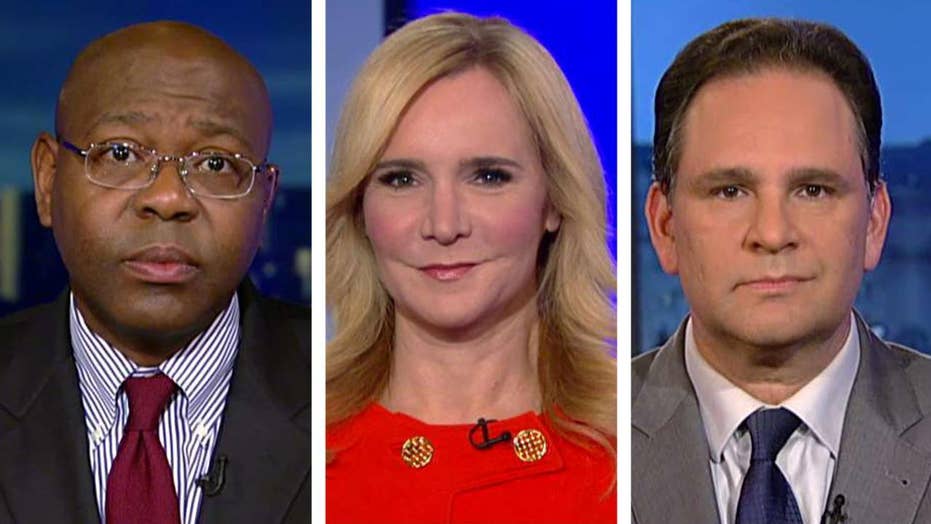 This is a rush transcript from "Special Report with Bret Baier," October 19, 2018. This copy may not be in its final form and may be updated.

MEVLUT CAVUSOGLU, TURKISH FOREIGN MINISTER (through translator): It is out of the question for Turkey to give Pompeo or any other U.S. official any audio recording.

MIKE POMPEO, SECRETARY OF STATE: I have heard no tape, I've seen no transcript. And the network that reported that ought to pull down the headline that says I have. We should be factual when we report things about this. It's a very serious matter that we're working diligently on.  And so to put up headlines that are factually false does no one any good.

BRET BAIER, ANCHOR: Secretary of State Pompeo talking about the ABC report that he had heard the audio the Turks had of Khashoggi's death and of a transcript. And he says that's absolutely false. This as the breaking news, the Saudis saying in fact he was killed in that consulate, that 18 people have been arrested, that two people, senior officials, a deputy intelligence director, essentially, and an advisor to the crown prince have been fired by the royal court and King Salman.

JASON RILEY, WALL STREET JOURNAL COLUMNIST: I think there are two issues here. One, what is Saudi Arabia going to do about this? And what are we going to do about Saudi Arabia? At the end of the day they are still a key ally for us in this region. They are our main weapons buyer. They're also the key to containing Iran. If we're going to prevent Iran from selling oil internationally, we're counting on the Saudis to help fill, make up any void that that creates in worldwide supply.

So the White House has to weigh the long-term relationship with Saudi Arabia against this ugliness that we're seeing right now and figure out how to strike the right balance. It's going to be difficult.

BAIER: A.B., I guess the question is the Saudis are saying that this developed after a fight in the consulate in Istanbul, and then he was killed. We don't know where the body is. We don't understand what the mission was to begin with. And they're not providing details. They say the investigations are continuing.

A.B. STODDARD, REAL CLEAR POLITICS: John Roberts at the White House was correct, we're going to learn more and things interrupt the narrative are going to come up. There were reports that one car went to the airport, the private plane, and one car went to a forest where presumably his remains are. So they could be searching there soon.

The Turks have played a blatant two-step here. They want to reveal and throw the Saudis under the bus, then they want to pull back. They want to leak to the American press contents of the audio, say that Mike Pompeo listened to it, and then retract. So they're going to be an interesting player in the next few days as the Saudis respond and the U.S. government responds.

To Jason's point, I think it's very clear the Trump administration is going to choose long-term interest. They're looking for some -- this is not plausible deniability. No one goes rogue and no one freelances in the kingdom of Saudi Arabia. But the Saudis believe that this has given the crown prince some kind of deniability, and I think the White House was looking for that. And we'll probably hear the president say it's their citizen, and they're taking care of it, and some people went rogue.

DAVID BRODY, CHRISTIAN BROADCASTING NETWORK: Yes, this feels like a drip, drip, drip scenario. And the word "fight" now I think has air quotes around it. What did that mean exactly? And we're going to find more about that sooner.

I think this gets back down a little bit to Jason's and A.B., to Donald Trump, and going inside his brain for a moment. And if you do, and I know liberals might not want to get inside that brain, but if you're Donald Trump, you're think leverage, you're thinking relationships. And as you both pointed out, I think that's where we're going with this. There's going to be some sort of repercussion, I believe there will. The question is when is this a slow as he goes situation. I think it is. I think he'll wait, find out, and then realize that we've got OPEC and oil and Saudi Arabia and all of that. We have got Iran, Saudi Arabia is a deterrent to that. And of course and the proximity to Israel. So all of that combined makes me think that Donald Trump will take this, believe it not, slowly rather than getting out on Twitter and too fast.

BAIER: I said the other day, it's like three-dimensional chess. You move one piece, other pieces move on other boards. But is that, if that's what happens, going to be good enough for Capitol Hill, for --

RILEY: That was my point. There are people, there are already congressmen and women itching for sanctions here. That is only going to escalate as a result of this. So to some extent it might not -- they might force President Trump's hand on this. Congress wants to do something, and this will have to rise to a level more than the treasury secretary boycotting an investment conference in Saudi Arabia. We're probably talking about sanctions here, talking about freezing assets of high-ranking Saudi officials, limiting their travel to the U.S. Something more serious is going to have to happen.

BAIER: OK, breaking news, we're going to continue this discussion with the panel. Again, the Saudis saying Jamal Khashoggi was killed in that consulate. People are, they say, paying the price for it. What does all of that mean, after a quick break.

BAIER: This is a FOX News alert. You're looking live at the White House because we are awaiting soon a statement from the White House on this Saudi announcement that, yes, Jamal Khashoggi was killed in their consulate in Istanbul, that 18 people, Saudis, have been arrested. Two senior officials have been fired. And their investigation, they say, is continuing. Waiting for more details.

Meantime, reaction is starting to file in from Capitol Hill. Ted Lieu, Democrat from California, on the House Foreign Affairs Committee, said this, quote, I'm pleased that Saudi Arabia has finally realized that when you cut up a human being into little pieces they will, in fact, be dead. I think it's outrageous that President Trump continues to defend Saudi Arabia. Clearly the crown prince is either implicated in that or responsible. It is his government and he has a lot of explaining to do. Just some of the early reaction. We'll likely hear much more in coming hours, including that statement from the White House.

We're back with the panel. A.B., of the options that the president has, what do you think is most likely? He said the other day that there could be very severe consequences which was a change in tone. What might those look like?

STODDARD: I think he was leaving himself, shrewdly, some space for the various facts that can come out that might conflict. And again, I reiterate, I really believe some conflicting information could mess up the Saudi story within the next couple of days depending on what the Turks do.

So the president was trying to do on one hand and on the other hand. There are ways for -- Steve Mnuchin, the treasury secretary, is not going to the finance summit but he's going to the anti-terror financing summit that is happening simultaneously in Riyadh. Again, that's a way of having your cake and eating it, too. I imagine that if he finds a way to explain away this -- again, I believe it's implausible -- is plausible deniability for the crown prince and he takes the advice of his son-in-law, which is this will all blow over, he might say we're working on explaining to the Saudis how serious what they're doing in Yemen is. Find another means by which to sort of take action, hold them accountable. But I think he's going to do everything he can to resist things.

BAIER: Let me just point out that part of the conflicting information is we don't know where the body is. Why do you have a guy go in with 15 people with a bone saw. And that is reported.

STODDARD: Is that plausible?

RILEY: We know that the crown prince has been pushing reforms that Khashoggi opposed. He made no secret off opposing them very strongly. We know the crown prince wanted this guy out of the way. I think it's hard to believe that his hands are clean in this regard.

BRODY: I think one thing that Trump cannot do here is go with the rogue theory. A lot of times he likes to go with some call him, his critics call him conspiracy theory. But in this case he has got to be careful not to get out and start reading maybe a few blog pieces or whatever it happens to be, because I think that, you talk about international relations, you're talking, honestly you're talking about morality here. At it's core --

BAIER: Let me say, the Saudi state-run news is now putting out the full statement, and it's very detailed. Among there, the statements saying the kingdom expresses its deep regret over the slaying of writer Jamal Khashoggi, saying that the king is restructuring the intelligence services in the kingdom. And remember, this is 1:00 in the morning. It's coming out on a Friday afternoon. It is a full statement here that says that this happened after a fight in the consulate. It's not going to pass muster on Capitol Hill.

And as for Donald Trump, real quick, I'll just say this. Look, his situation, he has got to figure out from a businessman of what he was, where he wants to deal and do relationships, to lead as a president from a morality standpoint and from an international relationship standpoint.